Judicial reform is reasonable and right

The reform of Israel’s legal system set out by Justice Minister Yariv Levin is reasonable and necessary. It will properly realign the balance of power between Israel’s judiciary, legislature, and government.

Reform of the Israeli legal system has been made necessary by a politicized Supreme Court, an imperious Attorney General, and a legal clique in every government ministry that holds a stranglehold on policymaking at the expense of lawmakers in Knesset and government.

These legal beagles have fashioned a system whereby they replicate themselves with impunity and occupy every central intersection of policymaking. They pretentiously call themselves “shomrei hasaf,” the guardians of the gates of democracy.

Except that these much-too-powerful actors have upset Israeli democracy by usurping powers to themselves never intended by Israel’s founders or parliamentarians; powers which extend far beyond those held by the legal system in any other democracy.

They furthermore skew decision-making to the utmost progressive side of any issue, making it impossible for the right and center-right (which is where most Israelis are) to govern effectively.

It is these actors that threaten Israeli democracy, not Justice Minister Levin’s proposals.

Therefore, it is sensible to change the way justices are selected, and to circumscribe the ability of judges to strike down Knesset legislation as they idiosyncratically see fit.

As per the example set by former Supreme Court mega-president Aharon Barak (and as perpetuated ever since through his hand-picked successors), in Israel today every matter is subject to the personal prejudices and individual inclinations of the enlightened members of the highest bench. They often rule according to their own slippery scale of propriety.

And, as Barak unilaterally decided, any person has standing before the court on any subject, and everything is “justiciable,” meaning that everything from tax to defense policy is subject to the reproach of the High Court of Justice.

THE COURT HAS DEVELOPED a series of pliant concepts with which to carry out its self-declared “judicial revolution.” Take the term “reasonableness,” which runs like a computer virus through the High Court’s decisions over the past two decades.

“Reasonableness” is authoritarian jargon which allows High Court justices to elastically apply their own sensibilities; to socially re-engineer Israeli society in their “enlightened” image.

“Substantive democracy” is another newfangled term that Barak concocted. This means that Court takes on itself a made-up responsibility to set “substantive norms and standards of decency” for public life, and to apply “broad interpretations” of the law to fit its own perceptions of “values,” “balance,” and “equality” – even if the law books don’t contain any such terms or prescriptions.

Given the current makeup of the Court, decisions that employ such infinitely flexible principles invariably are skewed towards the progressive side of the political spectrum, as mentioned above.

And thus, the Court has ruled in recent years with a liberal fist on allocation of JNF land, Palestinian residency rights in Israel, the operation of Palestinian Authority headquarters in Jerusalem, rights of foreign converts to citizenship, Haredi draft deferments and stipends to yeshiva students, commerce on Shabbat, and so much more.

There was little hard-core law involved these cases. You could guess the court’s decision in advance simply by looking at the composition of the panel of justices. The more progressive the panel, the more drawn-out-of-thin-air sermonizing there was likely to be in the decision. Essentially, the court made political decisions, “values” decisions, camouflaged as law.

For example, the Supreme Court ruled it “unreasonable” to compromise and close Bar-Ilan Street in Jerusalem for several hours on Shabbat, even though a public committee of prominent religious and secular Jews – which was far more representative of Israeli society than the Court – had found otherwise.

The Court found it “unreasonable” that religious Jews be allowed to pray on the Temple Mount because this would disturb the Arabs and require a massive police presence. On the other hand, the Court found it “reasonable” to allow the Women of the Wall to pray in a manner offensive to most worshippers at the Western Wall despite the disturbance involved and the massive police presence require to make it feasible.

It was “unreasonable” to give distinguished editor Shmuel Schnitzer the Israel Prize because of one offensive column he wrote over the course of a sterling thirty-year career in journalism. But it was “reasonable” to give Meretz leader Shulamit Aloni the Israel Prize despite a thirty-year career which specialized in attacking and offending the religious public.

The High Court also struck down Knesset legislation relating to the illegal immigration of migrant African workers, and it did this three times even though the Knesset each time passed revised laws with a large majority. The court simply decided that it knew better than parliamentarians what was “reasonable.”

What’s next? Well, would a decision by the government to extend Israeli law to all settlements in Judea and Samaria be a “reasonable” decision? How about the opposite decision – to dismantle all settlements? Or a cabinet decision to cut-off relations with the United States or to bomb Iran? Which of these decisions would be “reasonable” and which not? The imperious High Court justices will decide, not the electorate – unless something changes.

It is not just the High Court. The Attorney General and his army of legal commanders in every government ministry also have fallen into the habit of overriding value judgements passed into law by the democratically elected representatives of the Israeli public and of replacing them with their own so-much-finer feelings.

Case in point, regarding terrorists: In 2018, the Knesset passed a law allowing the interior minister to revoke the citizenship or permanent residency status of convicted terrorists, and their social benefits too. But the Attorney General decided to gut the law of its intent by forcing the interior minister to grant Arab murderers an alternative status: temporary resident status.

This status gives the terrorists full benefits like unemployment insurance, child support, disability insurance, and social security payments when they get out prison. Of course, this is the exact opposite of what the Knesset intended.

(This sadly reminds me of the Talmudic adage, which warns “He who has compassion on the cruel will end up being cruel to the kind.”)

LEVIN’S LEVELHEADED legislation will place limits on such interventionism by judges and attorney generals. It will allow the Supreme Court to overrule Knesset legislation only when sitting with a full bench and with a large majority of justices. It will dissuade the court from swatting away legislation with the amorphous argument of “unreasonableness.”

It will scratch the court’s monkeying with the meaning of legislation through fairy-tale interpretative rules such as “objective intention.” (This basically means that the justices can decide on their own what Knesset legislation should have meant, instead of what the legislators actually intended.)

It will appropriately redefine the role of the Attorney General and his many associates as advisors to the government, not as judges-juries-and-executioners all rolled into one.

And most importantly of all, Levin’s counter-revolution will give back to Israel’s elected representatives majority control of the committee that selects Supreme Court justices, and force open confirmation hearings in Knesset – just like the US.

This is not “the end of democracy,” but rather a long-overdue fix to Israeli democracy. It behooves opposition parliamentarians to relate to Levin’s proposals with the serious attention they deserve. Israeli parliamentarians ought to debate and negotiate the boundaries of legal reform instead of climbing up the ramparts with ominous threats and intemperate sloganeering. 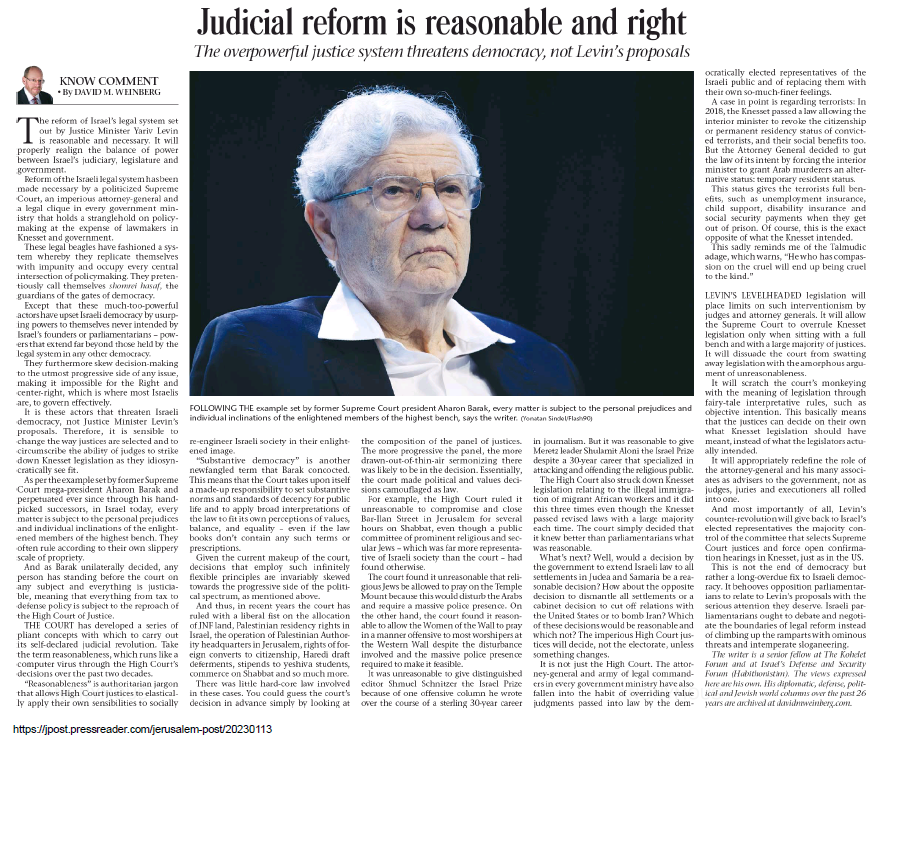