My first “aliyah” this week to “Har HaBayit” was scary, emotional, fascinating, and infuriating. And necessary.

In recent years, as increasing numbers of religious Jews have begun to visit the Temple Mount (Har HaBayit), backed by some prominent rabbinical figures in the Religious Zionist world, I encouraged my righteous sons, good yeshiva boys, to do so.

I told them it is essential that Jews and Israelis demonstrate their attachment to the site because radical Islamists and Palestinians have turned the Temple Mount into the apex of their all-out war against Israel.

But I declined to ascend the holy mount myself. After all, there are unique and stringent rules of kedusha and tahara, holiness and ritual purity, that apply in Jewish law to Har HaBayit even two thousand years after the destruction of the Second Temple (at least according to the Rambam, Maimonides) – and I didn’t think I was up to it.

At the same time, the Israeli government’s malfeasance in management of the Temple Mount long has infuriated me, and I have written about this matter dozens of times.

Thus far, Israel has chosen to maintain a situation whereby the Moslems exercise exclusive religious and de facto national rights on the Mount and have rigged the site as a base of attack against Israelis and against anybody who makes peace with Israel.

Jews, on the other hand, have only limited visitation rights and are almost altogether forbidden from praying there. Jews have been attacked by Moslems on the Mount even when approaching prayer at the Western Wall.

The thousands of boulders stockpiled by Palestinians on the Mount for their periodic, planned “outbursts” of rock-throwing violence are no less outrageous. So are the illegal Wakf construction projects on the Mount and beneath it, which willfully have destroyed centuries of Jewish archaeological treasures.

Palestinian leader Mahmoud Abbas continues to roil the waters and foment violence against Israel by repeating the canard that “Al Aqsa Mosque is in danger,” meaning that “the Zionists are conspiring to blow-up the mosque and Islamic shrine” on the Mount. This is a blood libel that goes all the way back to the notorious pro-Nazi Arab leader Haj Amin al-Husseini in the pre-state period.

Therefore, I have argued and continue to believe that Israel must parry Palestinian and Islamic incitement in Jerusalem and lay out a new diplomatic initiative to solidify Israel’s rights on Har HaBayit, hopefully through dialogue and even a regional consensus. (My many conversations in Gulf countries over the past two years have convinced me that this is possible.)

ALL THIS TIME, my personal desire to alight or ascend the holy mount, for religious and national reasons, has grown. But I still didn’t dare, until I saw an advertisement several months ago for an in-depth course of studies and tours about Har HaBayit, designed mainly for tour guides, run by an organization called Capot HaManool, The Open Gate.

(The phrase, which literally means the handles of the lock, comes from the Song of Songs 5:5, where the beloved fails to open the door in time when G-d comes to visit, tragically missing an opportunity.)

We also have studied the laws of sanctity that apply to the Temple Mount, the processes of purification required before ascending the Temple Mount, and halachic literature and modern research regarding the actual location of the ancient temples – which defines the zones of the Temple Mount Plaza that can be visited safely from a halachic perspective.

And thus, this week I ascended for the first time to Har HaBayit, along with my Capot HaManool class. (We took every precaution, widely avoiding the approximated zones of the Temple’s azarot, hail, soreg, etc.)

For me, this entailed appropriate physical and spiritual homework. This included a visit to the mikveh, a ritual bath, unlike any other previous mikveh immersion.

This is not the quick dip on the eve of a holiday or Yom Kippur that Orthodox men are used to. Rather, it involves meticulous preparation (relating to hair, nails, and more), and even pronunciation of a bracha, a blessing, before the immersion – something that very few religious men ever have the obligation or opportunity to do.

I also offered special pre-ascent prayers to G-d, including Psalms 84, “My soul longs, indeed it faints, for the courtyards of the Lord. My flesh cries out for the living G-d…”

And yes, when up on the Temple Mount, I unobtrusively davened, prayed, there too. I silently recited to myself the fifth chapter of the Mishna in Tractate Zevachim, Eizehu mekoman shel zevachim, which details what sacrifices were offered in which parts of the Temple. Then I said Aleinu Leshabeach LaAdon Hakol, the two paragraphs that end every Jewish prayer service three times a day, 365 days a year, which speaks of every Jew, and every nation, bowing before G-d.

(I did not dare bow or even bend forward when saying this prayer, never mind prostrate myself on the ground as Moslems do every day and as Jews do on Yom Kippur, because that would have been viewed by the guards of the Wakf as a blatant provocation.)

And yes, when up on the Temple Mount, I saw other religious Jews inaudibly praying there too, standing erect on their own in distant confines of the Mount amidst rubble and old olive trees.

OVERALL, my ascent to Har HaBayit was scary (meaning, awe of the holiness of the site); exciting and emotional (yes, I cried as I took 4,797 steps around the outer margins of the Temple Mount Plaza); fascinating (thanks to an excellent guide, a true religious and historical expert, Pinchas Abramovich); and infuriating (because of Wakf restrictions, as related below).

I learned many things, including the following two items. First, that there is plenty of room, loads of undeveloped and even desolate sections of land on the vast Temple Mount Plaza where a Jewish house of prayer could be built without interfering in any way with Moslem shrines and prayer practices.

Nobody needs to feel threatened by a modest presence of Jewish petitioners tucked-away in a distant corner of the holy mount. Unless of course your opposition to Jewish prayer and visitation on Har HaBayit stems from wholesale denial of indigenous Jewish rights in Jerusalem and the Land of Israel – which alas has become almost-mainstream Palestinian discourse.

Second, the Wakf and Israeli Police unpleasantly differentiate between various groups that visit the holy site.

Today, only Moslems can enter the Al Aqsa Mosque and the Dome of the Rock shrine. These buildings used to be open to non-Moslems, but the Wakf wanted to charge an entry fee and Israel disallowed this, so the Wakf slammed the doors shut. (However, I am told that if your guide has a few connections and slips some baksheesh, a bribe, to Wakf officials, some tour groups can get in.)

Non-Jewish tour groups can roam the outdoors of the Temple Mount freely with their guides, although this is allowed only for a few hours per day.

Jewish and Israeli tour groups also are allowed to visit, at limited times, mainly without interference from either Wakf or Israel Police guards, if this is coordinated in advance and if the group is not identifiably religious/Orthodox!

This is how my class of tour guides was classified, which allowed for a two-hour in-depth visit. But I had to wear a hat over my kipa and make sure that no tzizit, ritual fringes, were showing. This was annoying, but at least I wasn’t asked to shave my beard…

Jewish tour groups that are identifiably religious/Orthodox are allowed only short 20-minute visits on Har HaBayit. They are rushed in and out of the compound along a defined, peripheral route. Wakf guards and Israeli policemen surround and squeeze these groups like a girdle, less they dally or dangerously “infiltrate” the site.

Given the hostility of the Wakf, I suppose that there is some law-and-order logic to this discriminatory treatment of Jews and Israelis, for the moment. I certainly have no complaints against the Israel Police for doing the best they can at this super-sensitive site.

But from Israel’s leaders I have higher expectations and elevated demands. It’s time for them to negotiate significant improvements in the way the Temple Mount is administered, and Jewish-Israeli rights are accommodated there, based on principles of peace, tolerance, and religious freedom – for Jews and non-Jews alike. 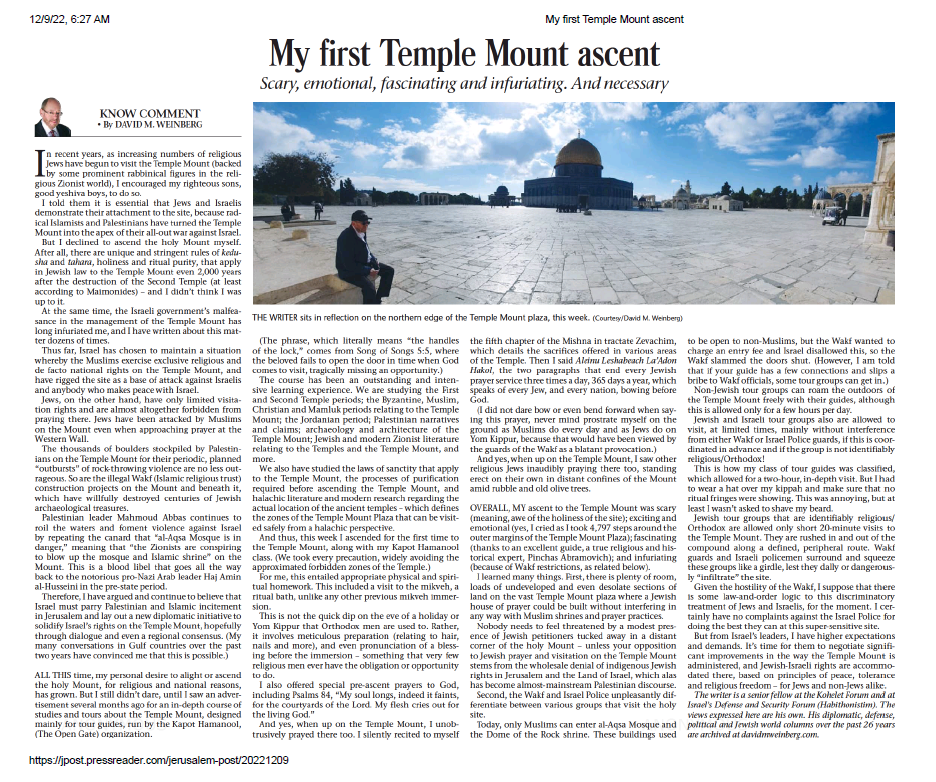