Kohelet is Israel’s most dynamic think tank; not just a successful policy institute but a revolutionary advocacy agency that has had an outsize influence in the intellectual debates of our times. 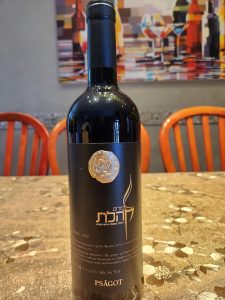 Some 400 young and less-young Israelis gathered earlier this week to celebrate the tenth anniversary of this country’s most dynamic non-profit think tank, the Kohelet Policy Forum.

Over good meat and drink at the Psagot Winery, Kohelet economists, social scientists, strategists, constitutional specialists, lawyers, and many doctoral students enjoyed each other’s company and celebrated their achievements.

What is to celebrate when speaking of a plain old think tank, a research institute that churns out policy papers and deals with mundane issues like tax and immigration policy and import regulations?

Actually, a lot! Because Kohelet is not just a successful policy institute but a revolutionary advocacy agency that has had an outsize influence in the intellectual debates of our times.

The Kohelet Policy Forum promotes Israeli national sovereignty and individual liberty. This makes it a “small c” conservative center. It was founded in 2012 by Prof. Moshe (“Moish”) Koppel, an American-born oleh and a true polymath. A specialist in machine learning and artificial intelligence (specifically, natural language processing), he also has written on the metalogic of halacha and on constitutional law.

He recently wrote a witty book about Jewish identity in the modern age, Judaism Straight Up, which examines the differences between traditional societies and contemporary cosmopolitan ones.

Kohelet is basically a “libertarian” shop. This means that it seeks to broaden individual liberty and promote free-market principles in Israel. Much of its efforts have been aimed at driving deregulation, cutting government bureaucracy, reforming local and national government bodies, and eliminating impediments to free and fair trade (like tariffs, quotas, cumbersome product standards, and licensing requirements). In this it has been enormously effective.

Kohelet has tackled the (mis-)management of government corporations and pension funds, land use and housing policies, labor and social welfare policies, food cartels, the regulation of cannabis cultivation and export, policies meant to better integrate Arab women and haredi men in higher education and the productive workforce, and more.

Kohelet also singlehandedly has put on the national agenda the demand for reform of Israel’s legal system and the need to re-balance the anchors of Israel’s democratic system – the Knesset and the courts.

In many ways, legal or constitutional reform is the hottest and most acute partisan issue on the domestic Israeli agenda, something akin to abortion as the most piercing issue in American politics. And Kohelet put it there (correctly so, in my view). I am sure that Kohelet’s thinkers and legal experts will play a sizeable role in the coming debate over the contours of judicial reform.

If then-justice minister Ayelet Shaked gets credit for appointing approximately 300 judges largely in a conservative and libertarian mold (out of a grand total of some 800 judges in the entire Israeli judicial system), then Kohelet shares part of that credit. Kohelet specialists raised national consciousness about the importance of who gets appointed to the bench and how, and helped Shaked make wise choices.

Kohelet also emphasizes “national sovereignty.” Indeed, Prof. Koppel wrote the very first draft of Israel’s so-called nation-state bill. Working with Avi Dichter MK and then many other parliamentarians on both sides of the left-right divide in Knesset, the Forum successfully drove passage of the Basic Law: Israel as the Nation State of the Jewish People.

In very recent times, Kohelet experts have worked closely with American and Israeli leaders to fight BDS efforts around the world, to challenge restrictive EU trade policies relating to Israel and UN discrimination against Israel, and to the redefine the status of settlements in Judea and Samaria (as legal) and map out the possibilities for extension of Israeli sovereignty in this area.

Overall, I think that Kohelet has helped transform the intellectual landscape of Israel. Its deep research, broad scholarship, and wise management has given the Israeli right wing moral self-confidence to advance its views – in a political-cultural environment long dominated by the left wing. In fact, for a long time the social, economic, cultural, and foreign and defense policies of Israel were literally dictated by the left, with nearly no scholarly pushback from the more hawkish and libertarian side of the ledger.

Equally important is that Kohelet has nurtured and supported a broad range of public policy and advocacy organizations on the Zionist libertarian side of the political spectrum, ranging from student groups and consumer rights organizations to citizen-security initiatives.

What is even better still is that most of these groups feel part of a network of like-minded organizations. I think that is a tribute to Moshe Koppel and his executive director Meir Rubin who have cultivated a sense of camaraderie among activists on the right wing.

There is no backbiting and jealousy among these groups. There is instead a sense of common cause and mutual reinforcement. That was the atmosphere I felt at the Kohelet anniversary celebration this week. (I doubt that left-wing activists feel the same about their camp.)

Alas, activists and journalists on the hard left have taken to demonizing Kohelet and vilifying its network of like-minded organizations, instead of learning a thing or two from them about top-notch professional research and honest grassroots advocacy.

Haaretz publisher Amos Schocken and his non-Zionist columnists, Yediot Ahronoth publisher Noni Moses and some of his radical left-wing reporters, Meretz leader Zahava Galon, and others, have savaged Kohelet as a “fundamentalist and Trumpist,” and as “purveying foreign and alien culture” that “distorts and corrupts” Israeli policy with “underhanded tactics and dirty money.”

This is a sad commentary on the intellectual war chest of the political left in Israel. All it can do is attack Kohelet ad hominem with distortions and defamations. Ironically, these exaggerated assaults have done more to solidify Kohelet’s reputation as an influential public policy shop than any amount of paid p.r. could attain!

Kohelet Forum experts prolifically have demonstrated that nationalist pride and individual liberties can be reconciled and embraced simultaneously. Surely the Forum will have an important role to play in advising the incoming Israeli government’s ministers, novices and veterans alike.

Full disclosure: The writer is a senior fellow at The Kohelet Forum (and at Israel’s Defense and Security Forum — Habithonistim). 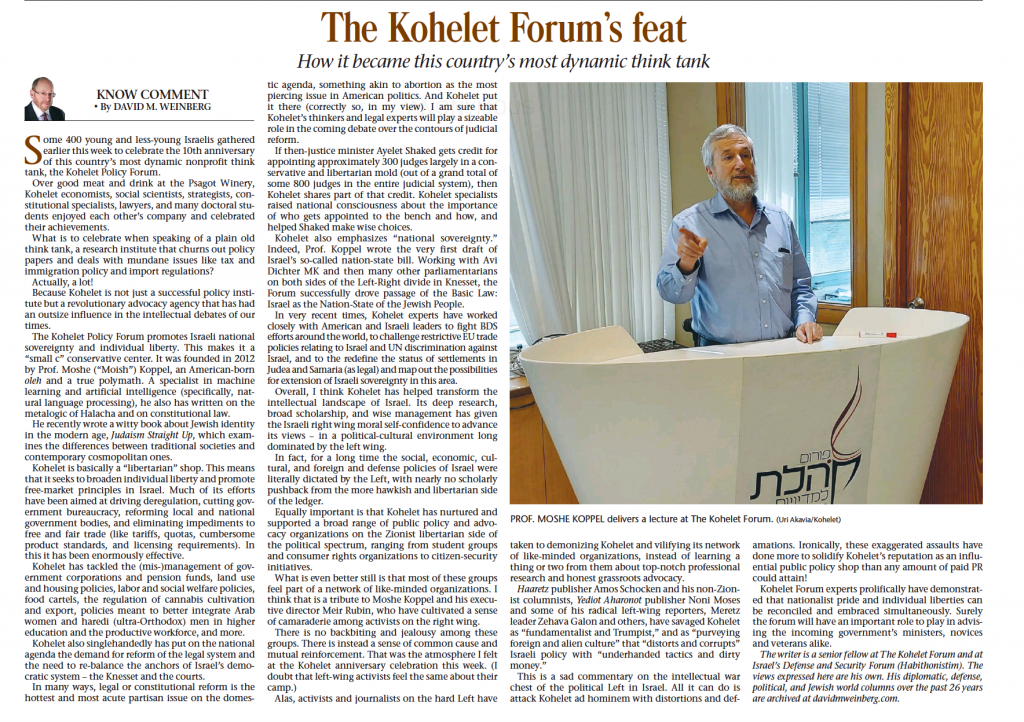