I am less concerned about the direction of the emerging new government than I am about the hysterical reactions to the possible government by foreign and hard-left observers. People like Tom Friedman and Asa Kasher swiftly have grabbed the opportunity to declare Israel a lost cause, and seem only-too-happy to jettison their associations with Israel and Judaism. 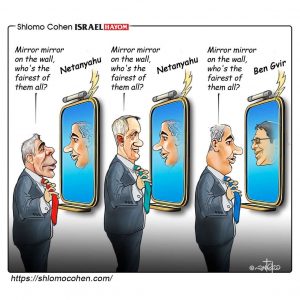 It’s in fashion to freak-out about the supposedly “supremacist” Israeli government that might be formed in the coming weeks. A coalition led by the Likud with Ultra-Orthodox and Religious Zionist parties is said to be a nightmare scenario that will distance Israel from the West and from Jews in the Diaspora who mostly lean left.

I can understand Israelis and foreign observers who find the current crop of Ultra-Orthodox and Religious Zionist leaders – Yitzhak Goldknopf, Moshe Gafni, Arye Deri, Bezalel Smotrich, and Itamar Ben-Gvir – to be unpolished and threatening. They are likely to place a plethora of contentious policy initiatives on the government table, making for a rough and tumble period.

But none of these people were elected prime minister – Benjamin Netanyahu was – and while Netanyahu appropriately shares some of the nationalist and Jewish identity agenda advanced by his purported coalition partners, he is unlikely to allow Israel to be yanked off its traditional democratic-liberal and core-consensus Jewish anchors.

And if he does pull to the extremes, the political pendulum inevitably will swing back towards the center in a next Israeli election. That is the nature of politics in a healthy democracy, and Israel certainly remains a healthy and vibrant democracy.

Thus, I am less concerned about the direction of the emerging new government than I am about the hysterical reactions to the possible government by foreign and hard-left observers. Their fierce remarks unmask their true feelings – which are disdain for the very concept of a Jewish nation state.

They almost seem gleeful about the opportunity now provided to them to distance themselves finally, finally from Israel all-together.

Starting with the pompous “save Israel from itself” New York Times columnist Thomas Friedman and running all the way to Israeli political philosopher Prof. Asa Kasher, these people were super-quick to grab the opportunity to declare Israel a lost cause and essentially declare the end of their sympathy for it.

FOR DECADES, the maharishi of Mideast punditry Tom Friedman relentlessly has peddled a hackneyed, insidious symmetry between Israel and the Palestinians; evenhanded Pablum that borders on professional misconduct, even imbecility. His compulsion to balance and compare every Arab misdeed to an Israeli misdeed is practically neurotic.

Friedman’s fixation goes further. Anybody who “collaborates” (note the connotation!) in the building and strengthening of settlements in Judea and Samaria are “enemies of peace” and “enemies of America’s national interest,” no less, according to Friedman — including “feckless American Jewish leaders,” fundamentalist Christians and neoconservatives, along with Netanyahu and the “lunatic core of the Likud.”

In the wake of last week’s Israeli election, Friedman topped this hyperbole with a eulogy for the “Israel we once knew,” for the hora-dancing, socialist-loving, liberal-nirvana country that “is gone.” Friedman equates the surge of right-wing sentiment in Israel (which he refuses to understand stems from real security concerns) with Trumpian “white nationalism,” and determines that Israel has entered a “dark tunnel” from which there seems no return.

Friedman asserts that “a fundamental question will roil synagogues in America and across the globe: “Do I support this Israel or not support it?… This question also will stress those US diplomats who have reflexively defended Israel as a Jewish democracy that shares America’s values, and it will send friends of Israel in Congress fleeing from any reporter asking if America should continue sending billions of dollars in aid to such a religious-extremist-inspired government.”

Reading between these lines, you can hear Friedman’s elation at Israel’s assumed moral fall and the relief he feels from the need to any longer support Israel. He is thrilled at being able to pose the “fundamental question” of whether Israel is still a democracy that shares America’s values, and to enthusiastically insinuate that it isn’t.

All one can say in response to Friedman’s ugly auguries is ugh! At least now he has completely unmasked himself as a foe of Israel and the Jewish People.

PERHAPS EVEN WORSE than Friedman’s rant was the (Hebrew) Facebook screed posted this week by Prof. Asa Kasher. He smeared the religious nationalist and haredi camps as “morbid, malignant, rude and repulsive mutations” of Judaism and Jewish peoplehood.

He called them “unruly, wicked ways of life that [primarily] sanctify the land and control of its inhabitants with violence, using methods that have no justice, no compassion, no morals; and more than anything else, is idolatrous worship of the land, the nation, and its corrupt leadership.”

Kasher’s post was so incendiary that Facebook removed it for violating rules of decent conduct. But Kasher didn’t let up. He continued to expectorate that “a Jewish people with this face is not my Jewish people, and not the Jewish people among which I wish to be counted as a son.” As a result, he announced that he now prefers not to be called a Jew but rather only “a person of Jewish origin.”

He then went on to reject “invalid” calls for unity with the two camps he views as mutations. “The differences between me and the people of the mutations are not marginal and should not be ignored for the sake of a higher goal,” he wrote. “There is no true unity and there never will be.”

What makes Asa Kasher’s diatribe so disturbing is its source. Until now, Kasher had been considered one this country’s respected and reasonable thinkers, someone who authored the IDF’s code of ethics in warfare and who defended its targeted assassination policies in academic and legal forums worldwide. He is an Israel Prize laureate. Now it seems that Kasher has lost his bearings in a haze of hatred and self-hatred.

Addressing his “brothers on the left,” Smotrich said his camp was “given a mandate to promote what we believe is right and good for the State of Israel. We are positively going to fulfill this mandate. But you should know that your attempts at intimidation are baseless and unnecessary. No one is going to destroy democracy, turn Israel into Iran, harm someone’s individual rights, or force Israelis to change their personal lifestyle.”

My conclusion is that “Ben-Gvir-Phobia” (as opposed to reasonable concern about Ben-Gvir’s rise) is a disease, a purposefully blown-out-of-proportion fear of the right wing that serves as cover for people who apparently weren’t comfortable with staunch Zionist and real Jewish identity to begin with. It leads to off-the-rocker reactions like those of Friedman and Kasher, who seem only-too-happy to jettison their associations with Israel and Judaism.

We shouldn’t go there. Israel’s democratic and Jewish discourse is sound even as it tends towards the conservative side of the map, and Israel’s religious, defense, and diplomatic policies will not easily be hijacked by Ben-Gvir-ism. The radicals that truly worry me are those that seek to crash Israel’s diplomatic relations and Israel-Diaspora relations with false, apocalyptic prognostications of Israel’s descent into barbarism.

Perhaps the best advice is to ignore angry self-declared prophets like Friedman and Kasher. Perhaps I shouldn’t have written about them at all. I am certain that they do not represent mainstream opinion in either the American-Jewish or Israeli communities. The Israel they fabricate and scorn ain’t the real, responsible and realistic Israel I know.