Which policies will Yair Lapid choose to adopt during his time as PM? Here are my nine “landfills” — policy suggestions for the period in which Lapid fills-in for Bennett. 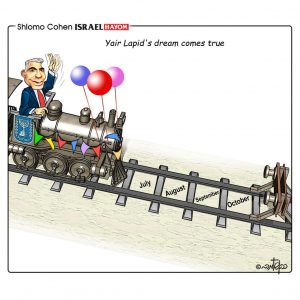 Lampooning Israel’s ongoing political quagmire, which has led us to a fifth election in three years, the comedy show Eretz Nehederet quipped: “The Chosen People have become the Choosing People (i.e., the Voting People), and there is little left that connects Israelis.”

(In Hebrew, to choose, to vote, and to connect sound the same: nivchar, bocher, and mechaber.)

And if that were not so sad, it would be funny.

Into this mess, steps newly minted Prime Minister Yair Lapid for a term that could last anywhere from five to fifteen months and beyond.

Only outgoing Prime Minister Naftali Bennett (who, in my view, deserves our gratitude!) was less likely to become prime minister than Lapid. And yet, here he is.

Basically, Lapid is on landfill duty, filling-in for his fallen colleague, Bennett, while simultaneously running for election. The question is what can and should Lapid do in the interim period of repeat-and-advance-nowhere elections that Israel sadly has fallen into? What responsible policies must he continue and advance?

Alas, the things that Lapid won’t do include ruling more emphatically in Area C. This means approving road and other infrastructure projects that will benefit both Jewish and Arab residents of this area, and dismantling illegal Bedouin and Palestinian settlements that purposefully impinge on strategic routes (like Khan al-Ahmar).

But the ultra-liberal Lapid doesn’t care deeply about these issues, and his predilection is to bow to American pressures in these and other matters.

So now is the time to re-assert absolute Israeli administration of the site, and to expand Jewish visiting privileges and even basic prayer rights at this most holy of places to the Jewish People.

But the ultra-liberal Lapid doesn’t care deeply about this issue, and he won’t want to upset the apple cart while running for election.

Lapid also won’t begin building in E-1 and expanding Maaleh Adumim eastwards too, which are best ways to solidify Israel’s long-term hold across the strategic arc from Jaffa to Jericho, anchoring Israel’s hold on the Jordan Valley.

In recent election campaigns, Binyamin Netanyahu said that he would move ahead with building 3,500 homes in E-1. Tenders were issued for 1,000 homes in Givat Hamatos, and projects in Atarot and Gilo were announced too. But in practice neither Netanyahu nor Bennett advanced these critical Zionist projects.

The ultra-liberal Lapid doesn’t care deeply about these projects, even though he swears fealty to a united and greater Jerusalem megalopolis.

So, what responsible policies might Lapid realistically adopt and advance?

First, he should squeeze Iran ever harder (and given that Bennett will still “hold the Iran file” in Lapid’s government, this is likely). Because the Biden administration is reengaging Iran on the weak nuclear accord crafted by President Obama, Israel has no choice but to continuously scuttle Iran’s military and terrorist plans on its own. More Fahrizadeh-style strikes on Iranian terrorist leaders and hits on key nuclear sites are necessary.

Second, he can continue to expand the Abrahamic circle of peace. Nothing will better solidify the fantastic new regional peace dynamic (which strengthens Israeli and Western interests, while weakening Iran, Russia, and the radicals among Palestinians) than a few more normalization accords between Israel and Arab/Islamic states. Niger, Oman, Indonesia, and Saudi Arabia should be steered next towards reconciliation with Israel.

And by the way, this will be good for Lapid’s election chances too.

Third, Lapid must continue to prepare Israel for war, the right way. Despite the Abrahamic peace dynamic, Israel must prepare for a broad range of war scenarios. This includes development of a credible Israeli capacity to strike Iranian nuclear targets; preparation for real war on three fronts against an Iranian-led coalition; and the ability to withstand intense missile wars.

Defensive systems (like the purported, new laser anti-missile system) don’t suffice. Israel must have ground forces capable of swift and crushing maneuver to attain decisive outcomes by taking the fight deep into enemy territory and breaking its will to fight.

Fourth, Lapid must brook no terror. (This is certainly true if he wants to win a November election.) Zero tolerance for Palestinian border rushes, booby traps on the fence, missile fire, incendiary kites, and the like. Lapid should make it clear that even one bus bomb, G-d forbid, or one round of Kassam rockets, will cost the Palestinians in tangible real estate and in concrete Israeli assistance of all types. When they want to, both Palestinian entities (nasty and corrupt as they are) are 100% capable of halting violence against Israel.

This also means targeting Hamas leaders if they fail to maintain the current lull; striking deep inside Syria the minute IRGC bases are identified; and knocking out more Iranian nuclear sites through subterfuge – hopefully with continued clear US backing for this “war between the wars.”

Fifth, Lapid must significantly boost the budget for rebuilding and completing the so-called security fence along the “seam line” — so that it might really have a chance of proving effective. Bennett began working on this, and Lapid should continue.

Sixth, Lapid should demand nothing less than overwhelming, sweeping, almost cosmic reform of the corrupt Palestinian Authority before even approaching a discussion of political “road maps” for the future. He certainly should transfer no more tax monies to the PA. And for the foreseeable future (until the Palestinians become peaceful Norwegians), Lapid must stay far away from the Palestinian state thing – especially if he wants to get properly elected Israeli prime minister.

Seventh, Lapid can act upon the tough stance he has led as foreign minister towards antagonistic international organizations, like the UN Human Rights Council and Amnesty International.

It would be refreshing and invigorating for Israel’s global diplomacy, I think, to expel hostile UN agencies from the prime Jerusalem real estate they occupy on Ammunition Hill and in Armon HaNetziv in Jerusalem – including the very-problematic United Nations Relief and Works Agency for Palestine Refugees in the Near East (UNRWA) and Office for the Coordination of Humanitarian Affairs (OCHA). It’s time to give these agencies the boot, and to end UNRWA educational programs in eastern Jerusalem schools too.

And here is a winning idea for Lapid: The enormous campus occupied by the UN high up on the “Hill of Evil Counsel” in Armon HaNetziv would make for magnificent embassy properties for several pro-Israel Western countries!

Eighth, stop pining for Yitzhak Rabin and Shimon Peres. You, Mr. Lapid, are not their successor, nor do you want to be tagged with their failed record of Oslo-era peacemaking. Your penchant for reminiscing about them in every meeting with American Jews or Mideast leaders and in interviews — is honorable and touching, but unhelpful. Deal instead with the fact that most Israelis see Netanyahu as a legitimate leader of Israel with a real record of diplomatic and security successes.

Ninth, thou shalt not hate. Be inclusive, not divisive. After all, that was the supposed mantra of the outgoing government. Settlers are not “propellers,” haredi Jews are not “parasites,” and the Right is not “fascist” or “anti-democratic.” Do not employ any Ehud Barak or Avigdor Lieberman type of vicious rhetoric.

Unfortunately, last week Lapid alleged that a Likud government will be “led by Smotrich and Ben-Gvir” (referring to two hard-right MKs of the Religious Zionism Party that likely would be allied with Likud). This no truer than Netanyahu’s charge that a Lapid government will be “subservient to the Arabs.”

It is obscene and boorish to portray Israeli society as bisected by two warring narratives: that of a moral, liberal, democratic, universalist Israeli Left, versus an immoral, illiberal, isolationist, hyper-nationalist Israeli Right. This is a false dichotomy, a fictitious account of Israeli society. It must not be abided as the basis for Lapid’s election campaign (or for Netanyahu’s).