Israel’s democratic and Jewish soul is not at risk

Beware false election narratives from both the left and right. Do not let radical electioneering disfigure a noble reality. Israel continues to be a free, enlightened, creative and exciting place. 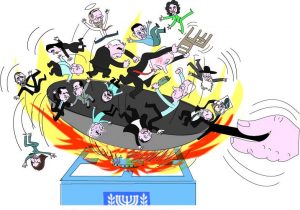 Israel’s next election battle is barely out of the gate, yet the negative campaigning already is in full swing.

The political left has launched an old and tired election campaign refrain: That Israel’s “democratic and Jewish soul” is at stake because the right-wing will drive Israel back to medieval times. The political right is pumping out the ugly message that the Bennett-Lapid “change coalition” sold Israel out to the Arabs and if re-elected will be the end of Zionism.

Both are false and dangerous narratives that damage Israel. Both these delegitimizing discourses must be avoided.

An example of the former discourse appears in an op-ed article published abroad this week by the esteemed writer Yossi Klein Halevy of the Hartman Institute. He goes overboard in angst about overwhelming dangers to Israel if a “terrifying” Israeli government is elected: “an anti-democratic coalition of ultra-nationalist and ultra-Orthodox parties, headed by former prime minister and Likud leader Benjamin Netanyahu.”

“A victory for the Netanyahu coalition would empower forces that despise democratic norms and minority rights,” Klein Halevy continues. He contrasts this with the outgoing Bennett-Lapid government, which “had a deeper mission to affirm Israel’s dual identity as a Jewish and democratic state.”

Well, I share Yossi Klein Halevy’s mourning for the outgoing government. I wish that it had lasted longer. It had significant achievements, not the least of which was lowering the tone of political rhetoric in this country and attempting a promising partnership with an Arab party. Moreover, I do not think that another narrow Netanyahu government in coalition mainly with Ultra-Orthodox parties will serve Israel best at this time, and I strongly dissent from Netanyahu’s polarizing rhetoric.

But it is just not true that the Bennett-Lapid government “had a deeper mission to affirm Israel’s dual identity as a Jewish and democratic state.” It is nice for Klein Halevy to describe it that way, and I am all in favor of such sentiment. But the government plainly was about latching onto whatever political coalition possible to wedge Netanyahu out of office, period.

Bringing in the Islamist Arab party Raam was not a choice of principle but of necessity. And this would have been unthinkable and politically impossible had Netanyahu not opened the door to this in his own desperate search for a coalition government – which was based on an unprecedented approach to Raam.

Moreover, all polls show that even if Netanyahu has a chance to form the next Israeli government, he will have to craft a coalition involving centrist parties that have a moderating influence. He might even have to rely on Raam! So, it is riotously alarmist to paint Israel’s future in very dark colors should Netanyahu form another government (“a coalition that would empower forces that despise democratic norms and minority rights”).

Such incautious talk only feeds into the delegitimization of Israel that is increasingly common discourse in liberal circles abroad. It also sets the stage for “wiser” actors to intervene “to save Israel despite itself” – which is another hackneyed and grievous direction in progressive discourse.

After all, if Israel is at an apocalyptic crossroads, and if Israel is pigheadedly making risky and wrong choices, and if its own behavior poses a “long-term threat to its existence” – as Peter Beinart, David Reminick, Ari Shavit, Daniel Sokatch, and others have argued in past – then either it will be driven into grave international isolation, or it must be rescued by global pressure from people “who know better.”

Beware such ostensible “saviors,” from whom I suspect we will hear plenty over the coming campaign months.

ON THE FLIP SIDE, it is important to reject the charge that the Bennett-Lapid government betrayed Zionism by embracing Mansour Abbas of Raam and allocating many billions of shekels to advancement of the Israeli Arab and Bedouin sectors.

On the contrary, this was the right thing to do. Long overdue. (And truth be told, the previous Netanyahu governments had moved in this direction with bigger-than-ever budgets for employment and education in the Israeli Arab sector, including in eastern Jerusalem.)

Furthermore, Mansour Abbas is an impressive and brave Israeli Arab leader who has made important pronouncements about recognizing Israel’s Jewish identity. One of the tragedies about the current government’s disintegration is that Abbas’ positive approach may get buried and lost.

Unfortunately, Raam might not even make it into the next Knesset, because it was not in government long enough to demonstrate real gains for the Israeli Arab sector and because its “pro-Israel” discourse may have been ahead of the times in the Israeli Arab community.

It also is important to reject Likud allegations that the Bennett-Lapid government weakened Israel in the defense and diplomatic arenas.

Another Likud government will not be “led by Smotrich and Ben-Gvir” – as Yair Lapid alleged this week (referring to two hard-right MKs of the Religious Zionism Party that likely would be allied with Likud), any more than another Bennett-Lapid government will be “subservient to the Arabs” – as Netanyahu charged this week.

These are false dichotomies, fictitious accounts of Israeli society. They must not be abided as the basis for our coming election campaign.

Instead, let’s have a worthy debate in Israel about important public policy matters, over which there is a continuum of respectable views that defy crude categorization as democratic or anti-democratic, Jewish or anti-Jewish, Zionist or anti-Zionist.

Israel continues to be a free, enlightened, creative, and exciting place. Do not let radical electioneering disfigure that noble reality.