Reel in the Saudis

Biden ought to move beyond his Trump traumas and Iran illusions to get behind the Abraham Accords, bringing Riyadh into the regional peace revolution. 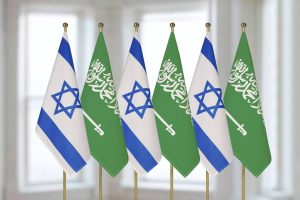 In 2017, I published an essay in this newspaper warning that Israel should not bear-hug the problematic Saudis, nor fall prey to over-enthusiastic fantasies about peace with Riyadh.

Saudi Crown Prince Mohammed bin Salman (MBS), I wrote, is not the answer to Israel’s prayers in facing-down Iran. And he will demand down-payments to the Palestinians as the up-front price for mere lukewarm Saudi openness to Israel.

I reminded readers that, for all its legendary wealth, Saudi Arabia is a failed state with tribal divisions, zealously-rigid religious leaders, and byzantine family oligarchic enmities – all of which could coalesce to thwart the social, religious, and diplomatic reforms that MBS is almost single-handedly seeking to implement.

Well, I was wrong about MBS and his new Saudi Arabia. Over the past two years, the “sand curtain” has fallen, leading to the “Abraham Accords” peace agreements between Israel and Gulf Arab states.

Just this week, the United Arab Emirates and Israel signed a free trade agreement expected to push the value of UAE-Israel non-oil bilateral trade beyond $10 billion within five years. There were numerous reports of growing Saudi-Israel business ties, and public acknowledgment of high-level Israeli visits (including the defense minister) to Riyadh in recent years.

Apparently, dozens of Israeli executives recently have been allowed to enter Saudi Arabia using their Israeli passports, instead of being required to use second passports from other countries, as had long been the practice. Meanwhile, a private-equity fund run by Jared Kushner, the son-in-law of former President Donald Trump who led negotiations on the Abraham Accords, has arranged a deal to invest millions of dollars from Saudi Arabia’s sovereign wealth fund in Israeli startups, according to The Wall Street Journal.

Last month, the Saudis hosted a multifaith conference on “Common Values Among the Followers of Religions,” in which Rabbi David Rosen and nine other Orthodox rabbis participated, and kosher food was served. (Rosen is the international director of interreligious affairs of the American Jewish Committee, based in Jerusalem. His Israeli identity was widely known and prominently acknowledged.)

Most amazing of all is that Israel and Bahrain now have a defense cooperation agreement whereby Israeli naval personnel are permanently stationed in Manama – something that literally gives Israel a forward base on Iran’s borders. No such thing was imaginable two years ago, and again, this would be unthinkable without Saudi say-so.

GIVEN THIS, one would think that the Biden administration would be doing everything possible to reel Saudi Arabia all the way into the Abraham Accords; to entice MBS into open partnership with Israel.

Unfortunately, this does not seem to be the case. Instead of embracing the Abraham Accords and investing in their expansion, the administration seems to be sitting on the sidelines of this historic transformation, at best. Sabotaging the Accords, at worst.

The administration has made it clear that its top interest is beseeching Iran for a renewed nuclear deal, not solidifying a new regional alliance against Iran with Israel and Saudi Arabia as its fulcrums.

As a result, Biden has paid only lip service to the Accords while doing little concrete to promote them. (For a while Biden’s aides even refused to use the moniker “Abraham Accords.”) The administration has not appointed a special envoy tasked with advancing Abraham Accord-type reconciliations between Arab/Islamic countries and Israel. This is something that should have been an early Biden administration move, with a high-profile appointment on the level of a Kushner.

Instead, the Biden administration rapidly announced a “recalibration” of US-Saudi relations (i.e., a downgrading of ties), and appointed a special envoy tasked with withdrawing US support for the Saudi battle against Iranian-backed Houthi forces in Yemen.

Washington also removed the Houthis from the State Department’s Foreign Terrorist Organization list, even as the Houthis were firing rockets at Saudi civilian and oil infrastructure. A terrible decision! This, too, relates to the administration’s helter-skelter rush into another bad deal with the Iranians.

Beating-up on Saudi Arabia (and Egypt) for their human rights records is a Biden administration sport, too – while being silent on Iran’s more egregious human rights violations. In fact, Biden has thus far refused to meet with or talk to MBS (whom the US blames for the killing of Jamal Khashoggi in the Saudi consulate in Istanbul).

At the same time, Biden has cozied-up to Qatar which sits securely in Iran’s regional camp, even extending non-NATO major ally status to Doha.

In sum, Biden administration behavior casts a pall over the Abraham Accords and engenders doubt that the “Abrahamic narrative” can grow beyond its current contours.

All this comes at the expense of so much important work that Israel and Saudi Arabia ought to be doing together with the US, like reinforcing Jordanian stability and improving the flow of oil to the West.

US policy must change. Despite “Trumpian residue” on the Abraham Accords and Palestinian dissatisfaction with the Abraham Accords dynamic – things that clearly bother Biden’s people – doubling-down on the Accords should be a priority US foreign policy goal, a “no brainer.”

In any case, kowtowing to Iranian preferences by distancing the US from Saudi Arabia (and to an extent from Israel, too) has not softened Teheran one bit. The US is no closer to signing a good accord with Iran than it was 18 months ago.

Expansion of the Abraham Accords to Saudi Arabia would have important side benefits too, such as signaling Palestinian leadership that the time to compromise with Israel has come. Perhaps MBS could help convince Palestinians to accept the Jewish People’s historic rights in Israel. Perhaps Riyadh can bring Palestinians to see Israel as a force for good, knowledge, prosperity, and stability in the Middle East – which it surely and demonstrably is – leading to an amicable settlement with Israel.

For this and so many other reasons, Biden administration officials and mainstream Democrats in Congress ought to move beyond their Trump traumas and Iran illusions to get behind the Abraham Accords, bringing Riyadh into the regional peace revolution.