When the going gets tough…

… the tough get going. When this country is under attack, Israel’s friends need to be more determined than ever to defend it. 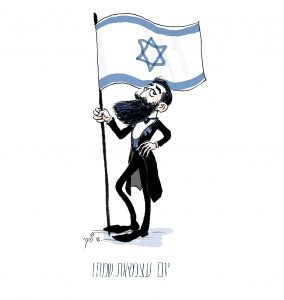 It is easy to be proud of Israel when it wins a European song festival or an Olympic medal; when it absorbs Jewish refugees from every corner of the globe; when it leads the world in coronavirus treatment and vaccination; when it develops life-saving drugs, breakthrough communication technologies, and agricultural innovations; and when it signs peace treaties with willing, moderate Arab countries.

It is harder to be proud of Israel and stand by Israel when it is under broadscale attack from the media, political sector, and politically correct “civil society” actors. This typically occurs when Israel is forced into armed confrontation with its sworn enemies; when Israel implements a controversial policy for reasons of national interest; or when Israel screws-up in some diplomatic matter or tactical operation.

It also is difficult when Israel decides to build more homes in the hotly disputed Judea and Samaria territories (the West Bank); or when Israeli policemen employ questionable levels of force to quell anti-Israel demonstrations in this country’s sovereign capital.

The question is: When difficult situations present themselves, do supporters of Israel head for the hills or hide-away sheepishly on the sidelines, or do they work hard to comprehend Israel’s predicaments and double-down in articulating perspectives that lead to better understanding of Israel?

Hopefully, people who identify with the grand goals of the modern State of Israel; who know in their bones that Israelis are sincere in their desire for peace and democracy; and who recognize that Israeli leaders have the toughest job in the world in often-unprecedented situations of moral dilemma – will give Israel the benefit of the doubt.

And thus, when Israel is under attack, they become more determined to speak-up for Israel. An old adage is appropriate: When the going gets tough, the tough get going.

Admittedly, it is hard to maintain that Israel holds the high moral ground when so many supposedly superior actors – like human rights groups and international agencies such as the UN Human Rights Council – regularly and frequently savage Israel. It is awkward to always be on the defensive, for Israel.

But in a world increasingly dominated by fake news, distortive and inflammatory social media, woke prisms, and extreme anti-Western and anti-Israeli discourse – standing-up and standing-out for Israel is more necessary than ever before.

IT IS WORTH keeping in mind that Israel finds itself, once again, in a unique situation; a strategic and political situation of great promise but also of some peril.

On the one hand, Israel’s strategic situation never has been better. It stands at the helm of a new regional strategic alliance for peace and against radical Islamic actors; an unprecedented coalition that includes key Sunni states like Egypt, the UAE, and (tacitly) the Saudis.

It has a strong military alliance with the US, necessary and reasonable working relations with Russia (whose air force controls the skies of adjacent Syria and whose surveillance radars now cover the entire airspace of Israel), and decent diplomatic ties with most Western countries (all of whom strongly desire business, technological, and cultural ties with Israel).

But because of Israel’s successes, and because the US seems to be backing away from its traditional allies in the Mideast, bad actors are in rearguard revolt more than ever before.

The Islamic Republic of Iran is on a hegemonic march to dominate the Middle East. Its ambitions include confronting Israel (and the West) with a nuclear bomb, the effective takeover of weak entities like Iraq, Syria, Jordan, the Palestinian Authority, and the Gaza Strip, and the subsequent surrounding (strangulation) of Israel with an array of accurate missiles and killer drones. Iran is funding and fueling (arming) several terrorist groups active in Palestinian areas.

The recalcitrant, rejectionist Palestinian Authority defiantly has decided not to board the “Abraham Accords” peace train, and instead is allowing itself to fade further into the armed-enemy-of-Israel camp. It instigates violence against Israel, especially in and around the Temple Mount, purposefully turning that holy site into ground zero for an Islamic world war against Israel.

This also has spurred a wave of terrorist violence against Israel from among Israeli Arabs; violence that ranges from extreme vandalism and cutthroat protection rackets to murderous riots with shooting and stabbing attacks.

In mixed cities like Lod and Acre, near civil war erupted last year. Some analysts feel that Israel is facing a second war of independence that will yet escalate and require all-encompassing warfare against Arab marauders from within.

So yes, Israeli troops and police aggressively have escalated their counter-terrorist operations. Sometimes video footage of these operations doesn’t go over politely on TV screens in comfortable North American or European salons. And sometimes the security forces go overboard with cringe-worthy violence against Arab non-combatants.

What can you do? When it comes to choosing between the terrorist threat and the “hasbara” threat (i.e., suffering Western criticism and losing the support of some observers from afar, because Israeli force is unpalatable to these observers), Israeli leaders have no choice but to give priority to dealing with the terrorist threat.

Obviously, it would be great to fashion policy that manages both challenges most effectively, but that is easier said than done. And so, I say that when Israeli security forces occasionally mismanage the delicate balancing task, they ought to be cut a little slack.

I am not burying my head in the sand or belittling the discomfort that good pro-Israel activists abroad sometimes feel when watching Israel in action. But it is important that they know this: Few Israelis will apologize for so-called “heavy-handed” Israeli troop and police tactics.

Not when Israelis are under attack and when dozens of other horrendous terrorist attacks narrowly have been thwarted by Israeli police and IDF troops over the past month.

It’s hard not to say: “Hasbara be dammed” – especially when the world automatically defaults to blaming Israel no matter what.

Shireen Abu Aqla is the classic case in point. Her death amid a firefight between Palestinian terrorists and Israeli counter-terror operatives was labeled ‘cold blooded assassination by Israel’ before you could blink.

As if the terrorists were not to blame for the entire situation. As if Al-Jazeera journalists were neutral, holy observers in this conflict. As if journalists who insert themselves into active war situations, alas, never get hurt. As if Israel was a priori the criminal party, facts and situational assessment be dammed.

Against such twisted, iniquitous, ugly degradation of Israel we must fight – with conviction in the essential justice of the Zionist cause and the resplendence of Israel.