Israel has good reason to fear that Abdullah and Biden are cooking-up an attempt to impose new pro-Arab “arrangements” on the Temple Mount, with Biden coming to Israel in late June to ride herd on this issue. Note: King Abdullah has no claim to “custodianship” over Muslim and Christian holy sites in Jerusalem.

POSTSCRIPT, May 14: Sure enough, Biden did the WRONG thing and yesterday “recognized the Hashemite Kingdom of Jordan’s crucial role as the custodian of Muslim holy places in Jerusalem.” As my article below makes clear, Jordan invented such “custodianship” out of thin air! 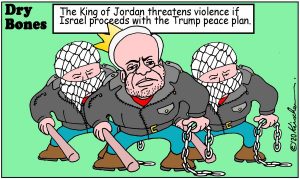 According to numerous media reports, the Hashemite Kingdom of Jordan wants Israel to relinquish any last vestiges of control over the Temple Mount in Jerusalem. Instead, the Jordanians are baselessly claiming exclusive “custodianship” over the holy site.

This week, Jordanian Foreign Minister Ayman Safadi brazenly declared that “Israel has no sovereignty over the holy sites in Jerusalem! It is a Muslim place of worship, and only the Jordanian Waqf has full authority over the management of the compound,” he avowed. And with additional chutzpa, he added “This is occupied Palestinian land.”

Two weeks ago, the overheated Jordanian Prime Minister, Bisher Khasawneh, saluted Palestinian rioters on the Temple Mount “who proudly stand like minarets, hurling their stones in a volley of clay at the Zionist sympathizers defiling the Al-Aqsa Mosque under the protection of the Israeli occupation government.”

All this, on the eve of today’s (Friday) meeting in the White House between Jordanian King Abdullah and US President Joe Biden, with the issue of Jerusalem expected to be one of the main topics of the meeting.

Israel has good reason to fear that Abdullah and Biden are cooking-up an attempt to impose new pro-Arab “arrangements” on the Temple Mount, with Biden coming to Israel in late June to ride herd on this issue.

Jordan claims that Israel is violating the “historic status quo” – which is a bad joke because the so-called “status quo” has been killed by the Wakf and radical Islamists who have tuned the Temple Mount into ground zero for battle against Israel.

It’s important to remember that Amman fiercely opposed the Trump Plan for regional peace because it specified “freedom of worship” (undefined) on the Temple Mount, and because the administration insinuated a role for Saudi Arabia in administrating the Al-Aqsa Mosque – alongside or perhaps instead of Jordan. For historic reasons, there is nothing that upsets the Hashemites more than the suggestion they might lose-out to the Saudis in safeguarding Al-Aqsa.

Israel never has recognized Jordanian “custodianship” over any holy sites in Jerusalem. In fact, the opposite is true, Jordan renounced claims to Jerusalem and the West Bank in 1988 (in favor of the Palestinians), and signed a peace treaty with Israel in 1994, whose 9th article specifies that “Each Party will provide freedom of access to places of religious and historical significance.”

So how did Jordan climb-up on its current high horse with claims of “custodianship” and denial of Israeli sovereignty on the Temple Mount? By exaggerating the rest of Article 9.

Article 9, Paragraph 2 of the Israel-Jordan Treaty of Peace says that: “In this regard (i.e., regarding freedom of access to places of religious and historical significance), in accordance with the Washington Declaration, Israel respects the present special role of the Hashemite Kingdom of Jordan in Muslim Holy shrines in Jerusalem.”

The Article adds that “When negotiations on the permanent status will take place, Israel will give high priority to the Jordanian historic role in these shrines.”

So there you have it. Recognition was afforded to Jordan’s “special role in Muslim Holy shrines in Jerusalem” – not “custodianship” over Muslim and Christian holy sites in Jerusalem, and not control of the Temple Mount Plaza, neither directly nor through the Wakf. (The latter organization purposefully was not mentioned in the Israel-Jordan peace treaty.)

Even Jordan’s purported “special role in Muslim Holy shrines in Jerusalem” was predicated on Paragraph 3 of Article 9, which says that “The Parties will act together to promote interfaith relations among the three monotheistic religions, with the aim of working towards religious understanding, moral commitment, freedom of religious worship, and tolerance and peace.”

I daresay that with its statements and actions mentioned above, and given the way the supposedly-Jordanian-controlled Wakf has behaved, Jordan is in deep default (complete violation) of this latter commitment.

In case anybody has forgotten, here is a reminder of Wakf and Islamic movement status quo violations. They have greatly restricted visitation rights to the holy mount for all non-Moslems (– only very few hours a week, and only through one Temple Mount gate). They have hijacked the pulpits in the mosque on the Mount to regularly preach hatred and violence against Israel.

They have allowed ISIS, Hamas, Islamic Movement and Turkish flags to fly on the mount in violation of all understandings, as well as blood-curdling banners with calls to annihilate Israel and the Jewish People.

They have attacked Jewish visitors to the Mount, Jewish worshipers at the Western Wall below the Mount, and Jewish worshippers on their way to the Western Wall. They have attacked Emiratis and Bahrainis praying in Al-Aqsa Mosque (because these countries signed Abraham Accord peace treaties). Palestinian terrorists even have smuggled machine guns onto the Temple Mount and killed police guarding the gates of the Mount. The terrorists launched their attack from within the Temple Mount and then fled into the shrines on the Mount.

Then there are the tens of thousands of boulders and rocks stockpiled by Arabs on the Mount under full view of Wakf officials, for periodic, planned “outbursts” of rock-throwing violence, including repeated attacks over the past month.

Perhaps worst of all, the Wakf has conducted vast, illegal construction projects on the Mount and beneath it, willfully destroying centuries of Jewish archaeological treasures.

Unfortunately, Western capitals have fallen easy prey to the chutzpadik Jordanian campaign to overstate its “rightful custodianship” (sic.) in Jerusalem, which amounts to an assault on Israel’s rights in Jerusalem.

For example, when then-Canadian foreign minister Marc Garneau visited Jordan last July, he “restated Canada’s recognition of Jordan’s custodianship over the Muslim and Christian Holy Sites in Jerusalem, and conveyed Canada’s appreciation of Jordan’s constructive efforts and recognition of the key role it plays towards a comprehensive, just and lasting peace for the Palestinian and Israeli peoples.”

Even Washington occasionally has slipped into its statements stuff about Jordanian “custodianship” in Jerusalem, even though it knows full well that there is no such thing in any Israel-Jordan or US-Jordan agreements.

Beware King Abdullah’s scheming in and around Jerusalem. The Hashemite kingdom may be an important partner for Israel in maintaining stability along Israel’s longest (eastern) border, and an ally in the fight against Iranian hegemonic ambitions. (And note: Therefore, Israel today provides almost all of Jordan’s water and energy needs.)

But Abdullah is proving to be a foe in the struggle over Jerusalem, willing to employ historical falsifications, radical rhetoric, and shameless diplomatic guile to undermine Israeli rights at the holiest place on earth to the Jewish People. And he takes on this task with hands that are not at all clean or trustworthy.