Other countries can legitimately disagree with policies promulgated in Jerusalem, but the leaders of this country must never allow others to treat Israel as dross…. Israel must not let Russia, Jordan, Palestinians, Israeli Arabs, the EU, and others treat it like a punching bag. 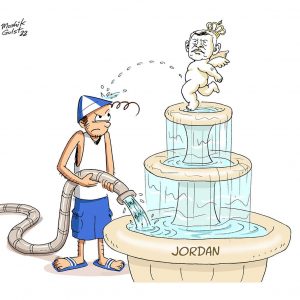 My Buby (grandmother) taught me that Jews should never be a “shmatte,” a dishrag; never allow others to treat Jews like dirt.

That truism certainly applies to the modern, sovereign state of the Jews, the State of Israel. Other countries can legitimately disagree with policies promulgated in Jerusalem, but the leaders of this country must never allow others to treat Israel as dross.

For example, I know that Israel has sensitive security interests relating to operations in Syria that need to be preserved when dealing with the Russian government.

But that doesn’t mean that Russian Foreign Minister Sergey Lavrov can poop on Israel, defame Jews everywhere, and defile Jewish history by shouting that “Hitler had Jewish blood” and that “the biggest antisemites are Jews themselves.”

Israel must strike back when such outrages are uttered. (Good for Prime Minister Bennett and Foreign Minister Lapid for doing so this week.)

I know that the Kingdom of Jordan plays an important role in securing Israel’s long eastern border, and that the kings of Jordan have been allies in Israel’s struggle against radical Islamic forces.

But that doesn’t mean that Jordanian Prime Minister Bisher Khasawneh can erupt in seditious salute to Palestinian rioters “who proudly stand like minarets, hurling their stones in a volley of clay at the Zionist sympathizers defiling the Al-Aqsa Mosque under the protection of the Israeli occupation government.”

Israel must strike back when such outrages are expressed. (Especially since the chutzpadik kingdom is so utterly dependent on Israel for its water, electricity, and even its security.)

I know that Palestinian Authority leader Mahmoud Abbas is the least bad Palestinian leader Israel is likely to deal with any time in the coming decade – even though his administration is corrupt, decrepit, and obstructionist. He allows a minimum of security coordination with Israel to persist.

But that doesn’t mean that Abbas can roil the waters and foment violence against Israel by repeating the canard that “Al Aqsa is in danger,” and “Zionists are conspiring to blow-up the mosques” on the Temple Mount. This is a blood libel that goes all the way back to the notorious pro-Nazi Arab leader Haj Amin al-Husseini in the 1940s. Abbas cannot get away with screeching about “filthy” Jewish feet that are “desecrating” Islamic and Christian holy sites in Jerusalem.

Nor can Abbas be allowed to continue with his despicable “pay-for-slay” policy – the monthly payments to terrorists in prison and the families of terrorists killed while carrying-out acts of terrorism against Israel. (The stipend rises with the terrorists’ prison sentences; they get paid more if they kill, rather than maim, their victims.)

Israel must strike back when such lies are voiced and hit back when such treacherous policies remain in place. (Especially since the insolent Abbas is so utterly dependent on Israel for his own survival. Did you know that Israel is still fundraising for the PA at international donor conferences!?)

I know that back in 1967 Israel ceded some administrative functions on the Temple Mount to the Jordanian and Palestinian-backed Islamic Trust known as the Wakf, that Israel has recognized a “special role” for Jordan on the Temple Mount; and that Israel Police must proceed with prudence when handling worshippers and rioters on the Mount.

But that doesn’t mean that Israel should allow radical Palestinian and Islamic actors to turn the Mount into a base of hostile operations against Israel, with police using kid gloves, if at all, against such violence.

It doesn’t mean that Israel should tolerate Wakf and Islamic movement attacks on Jewish visitors to the Mount and Jewish worshipers at the Western Wall below the Mount; or vast and illegal Wakf construction projects on the Mount and beneath it (willfully destroying centuries of Jewish archaeological treasures); or the defiant flying of ISIS, Hamas, and Turkish flags on the Temple Mount, etc.

Israel must strike back hard when such assaults are underway. (Especially since the lies and attacks on the Temple Mount, the holiest place on earth to Jews, are meant to undermine the core narrative of Jewish rootedness in the Land of Israel. This also is the reason that prayer for Jews on the Temple Mount must be facilitated soon.)

I know that the European Union is Israel’s largest trading partner and that some European leaders truly care about Israel’s prosperity and security.

But that doesn’t mean that the EU can be allowed to amplify big Palestinian lies by blabbering about Israel’s “unacceptable” actions, “excessive” force, and “violations of the status quo” on the Temple Mount. Neither should Israel tolerate shifty, supposedly balanced statements calling on “both sides” to de-escalate conflict.

Israel must strike back when it is treated with such disingenuousness. (Especially since most European countries have voted for Palestinian-sponsored resolutions at the UN that deny Jewish history in Jerusalem, and simultaneously they are pushing for a dangerous, sell-out accord with Iran – that will compound Israel’s security challenges a thousand times over.)

I know that it is an Israeli national priority to drive the better integration of Israeli Arabs and Bedouin in Israeli society – through economic stimulus programs, land claim resolution, and affirmative action plans.

Israel must strike back hard and re-take the country from the Arab and Bedouin economic cartels and criminal rackets that are eating away at national sovereignty and good government. (Especially since many Israeli Arab community leaders are begging the Israeli Police to aggressively crush these mafias, whose gun-supply grids fuel widespread domestic violence among Israeli Arabs.)

As the State of Israel approaches its 75th anniversary, it is time to get tough with Israel’s foes, its often-fickle friends, and its internal adversaries. Israel’s foreign and domestic policies should reflect self-respect and self-confidence, while being pursued, of course, with all due caution.

Pride and pragmatism should be the anchors of Israeli policy. But certainly, Israel should not tolerate anybody treating it like a punching bag.