Don’t be fooled: Biden will cut a bad nuclear deal with Iran

For the greater glory of the ghost of Obama, Washington will make every possible concession to Iran. 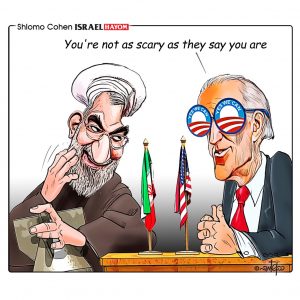 Two of Israel’s top diplomatic correspondents (Ariel Kahana and Barak Ravid) reported this week that the Iran deal once seen as inevitable is now a longshot. Sources in Prime Minister Bennett’s orbit think the chances of a US-Iran deal are “slim to none.”

Purportedly, this is because President Biden won’t give-in to Iran’s (clearly unjustified) demand that the Iranian Revolutionary Guard Corps and especially its elite “Qods” attack force be “delisted” (i.e., taken off the American list of Foreign Terrorist Organizations) and because of a series of other unreasonable Iranian demands.

“Surely,” they are saying in Jerusalem, even Biden’s security team finally must have realized that Iran will remain an implacable foe that can’t be coaxed into compliance with Western norms of peaceful relations.

Hurray! Israel has been “saved” by Iranian intransigence.

Consequently, Jerusalem is said to be “optimistic” that the Biden administration will revert to “Plan B,” which is renewed and enhanced pressure on the mullahs. This entails sanctions on Iran’s economy and sabotage of its military – all meant to force an end to Iranian bad behavior like building nuclear weapons and sowing terror across the region. This is what Israel has recommended to the Biden administration all along.

I say: Don’t be fooled by such “optimistic” reporting. I don’t believe that the Biden administration has changed course. No matter what, it remains hell-bent on concluding another soft nuclear deal with the ayatollahs of Iran.

Biden will find a way to explain, excuse, and justify even the most unreasonable, irresponsible, flimsy, and dangerous arrangement with Iran. The deal – a very bad deal from Israel’s perspective – indeed is coming, despite a momentary nadir in negotiations.

According to all accounts, the damn-it-all, sooner-or-later-to-be-signed nuclear deal with Iran is “shorter and weaker” than President Obama’s dreadful 2015 deal with the ayatollahs.

It will maintain Obama’s rotten sunset clauses; will whitewash all of Iran’s nuclear program violations to-date (like enriching uranium to the 60% level); allow Iran to keep its nuclear enrichment infrastructure and other military weaponization projects; will not guarantee “anytime and anywhere” inspection by the International Atomic Energy Agency of Iranian nuclear installations; and will not allow for the “snapback” of Western sanctions. It will further pave Iran’s path to a nuclear bomb in the coming years.

Biden also will not get additional negotiations towards a “longer and stronger” deal before the old/new deal expires – something that the Biden administrated had promised the Israeli and American publics when it set-out its goals.

Most chilling of all, the deal will grant Iran hundreds of billions of dollars in sanctions relief, allowing Tehran to rehabilitate its economy and continue funding its terrorist proxies and hegemonic aggressions.

Instead of reimposing maximum economic pressure and building a credible military threat against Iran, Biden will surrender to Iran. And then he will tell us that he has brought peace to the Mideast.

GIVEN THE CLEAR and present dangers posed by such American capitulation, why is President Biden going to sign-off on this? Why is his administration so locked-in to doing a deal, almost at any price, with the Iranians?

The stark answer is twofold: both political and practical.

Don’t underestimate the fervor involved in recouping Obama’s diplomatic “legacy” from the dustbin of history. For members of Biden’s national security team, almost all of whom served Obama loyally and lovingly, this is an unconditional crusade. Restoring the JCPOA means retroactive vindication for Obama. And ultimate, vehement repudiation of Trump.

In today’s hyper-partisan American political atmosphere, getting back to the JCPOA is no less than a sacred goal. It is the Holy Grail! Which is why I am sure that Biden is going for broke. He yet will do everything, including making the most wildly nonsensical concessions to Iran, to ensure this.

Unfortunately, the Iranians know this well, and thus they have Biden bent over the side of a barrel. They know that Biden eventually will give them their billions and let them keep their nuclear infrastructure too, all for the greater glory of the ghost of Obama.

Add to this calculation a lack of Democratic will. As a matter of foreign policy principle, the Democratic world is no longer truly willing to consider the use of military force, against Iran or any other foe, probably including Russia and China. It even is not willing to build a credible military threat against Iran, never mind crush Iran militarily with real strategic bombers.

Which presents America with a practical problem because five US presidents (including Biden) have sworn to stop Iran from becoming a nuclear military power.

Therefore, Biden and his cohort desperately want to believe that diplomacy can settle the matter. Or at least, that diplomacy can delay the Iranian bomb until the situation is some next administration’s problem. This is called kicking the can down the road. Hence, Biden is bound-and-determined, relentlessly driven to do a deal with Tehran.

Israel should not delude itself that anything but another very bad deal with Iran is coming down the pike. And thus, Israel must prepare itself for an inevitable full-scale military confrontation with Iran (and its proxies), with or without American cooperation.