Al-Jazeera accuses me of “wine-washing the occupation”

In the article below, Al-Jazeera accuses me of being “drunk on Zionism” and “wine-washing the occupation.” This is a badge of honor! I am very proud to be the first Israeli accused (as far as I know) of the crime of “wine-washing.” Moreover, I think I will adopt “Drunk on Zion” as the tagline for this website. Read on below, and enjoy.

And feel free to share this on social media sites, with my new hashtags: #Zionistwinewasher  #DrunkonZionism 🍷🤣

Israel is using its wine industry to distract from its other domestic pastimes like ethnic cleansing, apartheid and the periodic massacre of Palestinians.

Back in 2016, Washington Post emissary Anne-Marie O’Connor ventured to the illegal Israeli West Bank outpost of Havat Gilad to report on how “tourism is the new front in Israeli settlers’ battle for legitimacy”. Indeed, there were not many better ways for a major US newspaper to contribute to this battle than by dispatching a writer to sample “‘the good life’, with fine cabernets and artisanal cheese on the hilltops of the rugged, rural Bible land populated by the gun-toting children of Abraham”.

In the Zionist view, of course, the territory’s association with “Bible land” confers more-than-sufficient legitimacy upon its illegal usurpation from Palestinians. In Havat Gilad, O’Connor mustered such charming politico-touristic observations as “Holiday chalets are new facts on the ground” and “Wine tastings are a new weapon against a two-state solution” – with a proliferation of West Bank boutique wineries effectively constituting a wine-washing of occupation.

The journalist chose to conclude her report with a quote from Karni Eldad, co-author of a West Bank vacation guidebook, who insisted that the local panorama was about so much more than “hilltop youth burning a house” in the village of Duma – a reference, O’Connor explained, to the “young Jewish extremists who are the alleged perpetrators of a firebombing” in 2015 that “killed a Palestinian mother and father and their 18-month-old baby, and severely burned their 5-year-old boy”.

At that “same hilltop” that produced the alleged firebombers, Eldad emphasised, “there is a herd of goats that has unbelievable cheese”. Enough said.

Fast forward to the present, and wine-washing proceeds apace. A March 2022 post on the website of the New York-based media company VinePair details how the Israeli Ministry of Tourism is capitalising on Israel’s “booming wine scene” – which entails more than 300 wineries in the New Jersey-sized country and more than 50 in the vicinity of Jerusalem alone, “some of them built in areas where wine was made by settlers thousands of years ago”.

The Israeli wine industry “has ancient roots”, we are told, lest any opportunity be lost to drive into the ground Israel’s supposedly eternal and unalterable claim to this patch of earth. However, it was “only in the 1990s with the Golan Heights winery that Israeli wine could compete on an international scale”. These would be the same Golan Heights that Israel illegally seized from Syria, which again goes to underscore how good it can be for business when you just violently appropriate other people’s fertile land and other profitable stuff.

According to the Zionist narrative, Israeli “desert-blooming” techniques are to thank for the progressive fertility of select Levantine landscapes post-1948, when Israel officially invented itself on stolen Palestinian terrain. Despite there being “no such thing as a Palestinian people”, as former Israeli prime minister Golda Meir notoriously put it – and despite the alleged agricultural incompetence of the non-people, who preferred instead to inhabit a barren wasteland – Israel has to this day found it necessary to continuously uproot and destroy Palestinian olive and fruit trees, crops and orchards, not to mention Palestinians themselves. This would seem to suggest that the pre-1948 arrangement was hardly one of an Orientalist desert awaiting civilised conquest – and that Israeli machinations have been anything but, um, bloomy.

Now, the whole Israeli wine spectacle has laid the ground for ever more aneurysm-inducing propaganda to distract from other domestic pastimes like ethnic cleansing, apartheid and the periodic massacre of Palestinians. In a November 2021 Jerusalem Post intervention, David M. Weinberg opines that Israel’s “wine revolution is a sign of divine favor … an undeniable, stark indication of support from the Heavens” and a realisation of “biblical prophecies”.

The “Land of Israel has awakened”, Weinberg proclaims, “giving forth fruit to its indigenous people, the Jewish people, as it returns to and renews its ancient homeland” – now a “verdant agricultural world superpower”. He goes on to detect “biblical and Zionist echoes in every glass of good Israeli wine”, the consumption of which is a “deep profession of faith” and a “celebration of the People, Land, and God of Israel reunified”.

In the land of Palestine, it bears mentioning, wine has been made for millennia – although contemporary Palestinian winemaking operations are complicated by, inter alia, land and resource theft, prohibitions on labelling Palestinian wine as Palestinian, and Israeli desert-blooming endeavours like erecting massive walls in the middle of Palestinian vineyards.

Weinberg is not the only one drunk on Zionism. With Israel having recently reopened to international tourists regardless of COVID vaccination status, various popular travel sites have undertaken to highlight offerings for the wine-oriented traveller.

Then there is Adam S. Montefiore, who has “contributed to the advance of Israeli wines for 35 years” and boasts of being “referred to as ‘the ambassador of Israeli wines’ and ‘the English voice of Israeli wines’”. His regular appearances on the pages of the Jerusalem Post include a March 2022 submission bearing the title “Fly like a butterfly, sting like a bee” – leave it to an Israeli to appropriate the words of legendary pro-Palestinian boxer Muhammad Ali – and another one the same month titled “No room for small dreams”.

The latter headline, under which Montefiore chatters on about the unexpected success of Israel’s family-run Nachmani Winery, is itself appropriated from late Israeli president Shimon Peres’s book by the same name. Speaking of things vine-related, Peres is incidentally also the man who presided over Operation Grapes of Wrath, the bloody 1996 Israeli military assault on neighbouring Lebanon – not to be confused with the bloody Israeli military assaults on Lebanon in 1978, 1982, 1993, 2006, and so on.

Sharing a name with the John Steinbeck novel, Grapes of Wrath comprised the April 18, 1996, massacre of 106 civilians sheltering at a United Nations compound in the south Lebanese village of Qana. The late British journalist Robert Fisk visited the aftermath of the slaughter to find, as he later recalled, “legs and arms, babies without heads, old men’s heads without bodies”, and a girl who sat cradling a grey-haired corpse and crying: “My father, my father”.

As luck would have it, Qana is the very village where, back in the day, Jesus is rumoured to have miraculously turned water into wine. And as Israel’s current glorified vinicultural miracle continues to wine-wash all manner of atrocities, it is a wrathful harvest indeed.

The views expressed in this article are the author’s own and do not necessarily reflect Al Jazeera’s editorial stance.

Belen Fernandez is a contributing editor at Jacobin Magazine. She is the author of Checkpoint Zipolite: Quarantine in a Small Place (OR Books, 2021), Exile: Rejecting America and Finding the World (OR Books, 2019), Martyrs Never Die: Travels through South Lebanon (Warscapes, 2016), and The Imperial Messenger: Thomas Friedman at Work (Verso, 2011). She is a contributing editor at Jacobin Magazine, and has written for the New York Times, the London Review of Books blog, Current Affairs, and Middle East Eye, among numerous other publications.

Join me on the next (the fourth!) Kosher Travelers Food & Wine Tour of the Judean Hills, Galilee, and Golan, May 9-11, 2022. Sign-up now at https://koshertravelers.com/listings/the-ultimate-israel-food-and-wine-tour 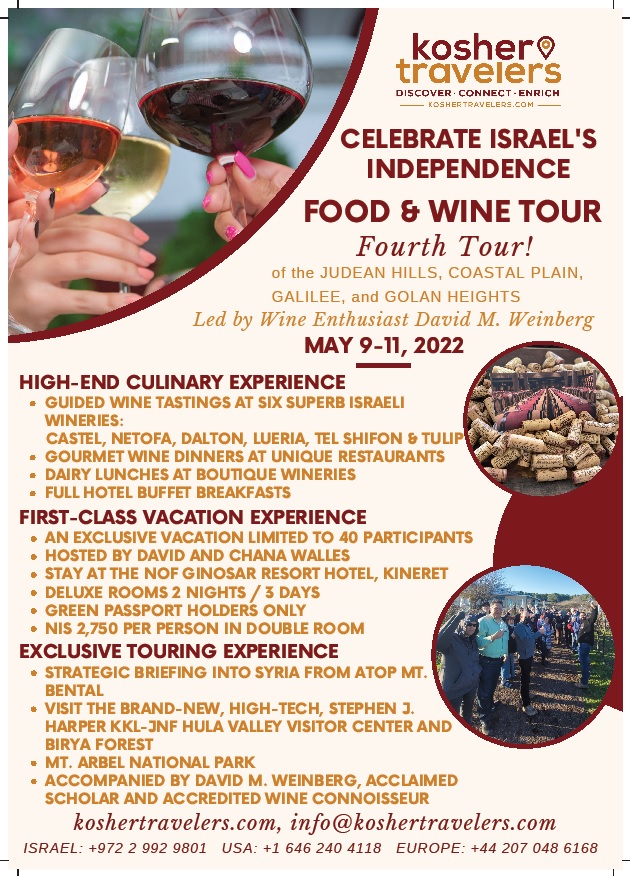