Who is afraid of the Abraham Accords?

Who’s afraid of the Abraham Accords? Only Iran and a motley assortment of “progressives” — because Israel is becoming the lynchpin of a new regional alliance that advances peace and security. 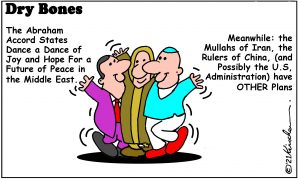 Two weeks ago, a smorgasbord of so-called “progressive” advocacy organizations in the US called upon Congress “to reject the dangerous Abraham Accords”; those accords being the umbrella framework that thus far has wrought peace treaties between Israel and the UAE, Bahrain, Sudan, and Morocco.

The US Presbyterian Church, Progressive Democrats of America, CAIR, Jewish Voice for Peace, IfNotNow, Jews for Racial and Economic Justice, and other fringe groups kvetched that “lasting peace comes from justice, not weapons deals.”

“America must embrace a foreign policy toward Palestine/Israel that is rooted in human rights, justice and equality, and to resoundingly reject any attempts to further the Trump administration’s ‘Abraham Accords,’ including through legislation like H.R. 2748/S. 1061, the Israel Relations Normalization Act of 2021.”

“While masquerading as ‘peace’ and ‘diplomacy’, the Abraham Accords and this legislation are in fact an endorsement of arms sales and political favors between the US and authoritarian regimes – including weapons sales to the UAE and the recognition of Morocco’s illegal annexation of Western Sahara – in exchange for the sidelining of Palestinian rights,” the statement said. “We must end support for Israel’s violations of Palestinian rights and its apartheid rule.”

The opposition to peace in the Middle East of these purportedly progressive groups, their opposition to dialogue and cooperation with Israel, and their support for continued boycotts against Israel – because the recalcitrant and violent Palestinians have been left lagging behind – tells you all you need to know about the nefariousness of these “woke” American groups.

It also is instructive as to new strategic architecture that is blessedly taking root in the Middle East.

This week, Israeli Prime Minister Naftali Bennett was received with royal honors in Manama by the King of Bahrain, and last week Israel signed an historic defense cooperation agreement with the kingdom that will see Israeli defense officials and naval personnel permanently stationed in Bahrain; something that literally gives Israel a forward base on Iran’s borders.

In short, the Abraham Accords have transformed the strategic architecture of the region, with Israel moving from a defensive stance against Iran and its proxies to an offensive posture that is buttressed by a network of alliances with key Arab countries.

You might even say (as Seth Frantzman has argued) that Israel is at the center of a new international security order, an emerging alliance structure that spans from the US through Europe to India, aimed at combating belligerent actors in the Middle East.

THE ABRAHAM ACCORD alliances are warm friendships too, backed a discourse of genuine tolerance and ideological moderation, and decorated with symbols of true acceptance – such as the playing of Israel’s national anthem, Hatikvah, in the palaces and on the official airwaves of Sunni states.

Indeed, the Institute for Monitoring Peace and Tolerance in School Education (IMPACT-se) has found that much of the old anti-Israel material in Emirati textbooks has been moderated. Passages that previously demonized Israel, presented anti-Semitic conspiracies, and blamed “the Zionist enemy” for seeking to “exterminate the Palestinian people” have been removed. Passages focusing on tolerance towards Jews have been inserted instead. Especially noteworthy is the removal of passages that presented the Palestinian issue as “the basis of conflicts in the Middle East.”

“Emirati textbooks are reflective of the assessment made by Crown Prince Mohamed bin Zayed over a decade ago that the West is a potential ally and not a colonial threat, that radicalism is categorically wrong and self-defeating, and that Emirati prosperity in a competitive global marketplace will be built on a tolerant and peace-loving workforce,” says IMPACT-se CEO Marcus Sheff. “The curriculum also teaches students to value the principle of respect for other cultures, and encourages curiosity and dialogue, including with Israel.”

Let’s not forget the manifest people-to-people ties that are developing between Israeli and Gulf societal groups, and the exploding trade ties.

The UAE-Israel Business Council has developed into a community of over 5,000 entrepreneurs, professionals, investors, companies, and government officials who regularly meet through an ever-expanding range of conferences, mixers, webinars, delegations, and in-person events. The Gulf-Israel Women’s Forum is the first association bringing together female leaders from across the Middle East. The Gulf-Israel Policy Forum brings together academics, policymakers, and cultural leaders from across the region.

In 2022, bilateral UAE-Israel trade in goods and services is expected to reach $2 billion, an increase of 50% over 2021, with significant growth in tourism, agriculture, investment, cleantech and professional services. Close to 500 Israeli companies have business dealings in the UAE, including 250 with a permanent presence or collaboration with a UAE partner.

Trade between Israel and the other Abraham Accords countries should jump this year to as much as $1 billion, with a strong uptick in trade with Egypt and Jordan, where the stigma of trading with Israel is gradually fading away – thanks to the Abraham Accords.

SO, IN CONTRADICTION to the sour and rejectionist remarks of the American “progressive” groups mentioned above, the Abraham Accords are not a Trump-tainted gimmick or a Netanyahu-stained end-run around the Palestinians. Rather, they are an authentic breakthrough for both peace and security in the Middle East; a transformation that evinces staying power and deepens by the day.

To assert that only Trumpian razzle-dazzle and arms deals were the basis for the Abraham Accords, as do the partisan grouches mentioned above, is a complete misread of Emirati, Bahraini and Moroccan purposes in pursuit of peace with Israel. The leaders of the countries want to redefine the self-identity and global image of Arab Moslems by blending tradition with enlightenment, anchored in an admirable discourse of religious moderation and broad-mindedness.

Affiliating with Israel fits perfectly into this agenda because this is exactly how they view Israel too – as a nation that successfully synthesizes strong ethnic and religious identity with modernity. Therefore, the Abraham Accords are deeply rooted in genuine ideological intentions (as well as urgent security realties) and are locked-in for the long term.

Alas, for the hard-left and anti-Israel mob it is hard to exult in the Abraham Accords. It means swallowing the fact Israel is demonstrably a force for good, knowledge, prosperity, and stability in the Middle East. After all, that is the reason the Gulf states and Morocco are bandwagoning with Israel!

It is even harder for these extremists to accept that, de facto, the Abraham Accords are a blunt refutation of the ongoing Palestinian campaign to deny and criminalize the Jewish People’s historic rights in Israel.

By referencing the Abrahamic common heritage of Moslems and Jews in the foundational document of the Abraham Accords, and repeatedly playing “Hatikvah” in their royal palaces, Arab countries implicitly are acknowledging that Jews are a Biblical people indigenous to the Land of Israel. This is a joyous revolution that overturns generations of Arab and Islamic ideological delegitimization of Israel.

It is truly tragic that the intransigent Palestinians and their backwards backers in America are unable to appreciate the gargantuan opportunities made possible by the Abraham Accords.

PrevPreviousArab Israelis: Opportunity or Threat?
NextSelling out to Iran is ghastlier than bowing to PutinNext