Published in The Jerusalem Post and Israel Hayom, February 11, 2022. 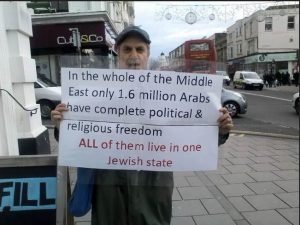 In recent years, I have been quite optimistic about the forward-looking integration of Israeli Arabs in broader Israeli society. So many positive polls and helpful government initiatives suggested that better Arab-Jewish relations were on the upswing.

But in the wake of last May’s violent Arab riots and two just-published, in-depth and ill-boding studies, there is ample reason to worry that the progress could prove ephemeral. It is up to Israel to act swiftly against Israeli Arabs radicals so that Israeli Arab moderates (the majority, I believe) can win the day.

Ostensibly, Israeli Arabs have gradually but inexorably moved to acceptance and even preference of life in the Jewish State of Israel. Recent polls suggest that 71% of Israeli Arabs feel that Israel is a good place to live; 68% prefer to live in Israel than in other countries; and 60% even says they feel Israel to be a home and a homeland. Ninety-three percent of Arab residents in eastern Jerusalem prefer to live under Israeli governance than that of the Palestinian Authority!

When asked whether they wanted to be transferred to an Arab government in the West Bank (as Avigdor Lieberman proposed in one of his transfer plans), Arabs of the “triangle” in northern Israel prefer by a 10-to-1 ratio to remain Israeli citizens.

And, of course, as anybody who studies at an Israeli university knows, as anybody who walks into an Israeli hospital or pharmacy knows, Israeli Arabs (including many women) increasingly fill professional positions in these important institutions.

(All these statistics and facts tell you exactly what Israeli Arabs think of the corrupt Palestinian Authority police state and neighboring dictatorial Arab states versus their opportunities in the State of Israel.)

Indeed, the previous (Likud) and the current (Yamina-Yesh Atid) Israeli governments have invested Israeli hundreds of millions of shekels to integrate Arabs into Israel’s burgeoning hi-tech and other profitable sectors. The previous government poured NIS 10 billion into infrastructure, education, and employment in Arab communities in 2016-2020. This year’s budget allocates NIS 29.5 billion ($9.2 billion) over five years, along with billions more in initiatives to fight crime and increase access to health care.

But Israeli Arabs, indeed all Israelis, are paying the price for minority community autonomy, anarchy, and lawlessness – and Israeli government fecklessness in the face of these challenges.

Arab behavior throughout the corona crisis, Arab behavior during the 2020 riots in many mixed cities, the continuing high crime rate among Israeli Arabs (led by powerful Israeli Arab mafia gangs and radical Islamic movements), the continuing aggressive sprawl of Bedouin across the Negev, and more – make it clear that Israel that can no longer afford the purposeful and self-destructive sectarianism of some bad Israeli Arab actors.

WRITING IN THE spring issue of Middle East Quarterly, noted historian Prof. Efraim Karsh warns that things are trending in the wrong direction; that there is growing rejection among Israeli Arabs of Israel’s Jewish nature and that they are systematically moving to subversion of state sovereignty and governability. He calls this “a clear and present danger to Israel’s domestic stability and national security, indeed to its very existence as a Jewish state.”

On the face of it, the participation of the Islamist Ra’am party in the new government coalition seems to point in the opposite direction. For what conceivably can be a better indication of sociopolitical integration than the inclusion of an Arab party in an Israeli government after a 45-year break? But Ra’am, Karsh avers, is an avowedly anti-Zionist party committed to the substitution of a Moslem theocracy for the State of Israel. For example, Ra’am has no qualms about threatening Israel with a religious war should Jews be allowed to formally pray on the Temple Mount, Judaism’s holiest site.

“Reluctant to acknowledge the May 2021 riots for what they are and what they portend, the Israeli media, the academic and intellectual elite, and most of the political establishment attributed this volcanic eruption to the supposed discrimination and marginalization of the Arab minority… Evoking the age-old Zionist hope that the vast economic gains attending the Jewish national revival would reconcile the Palestinian Arabs to the idea of Jewish statehood, this self-incriminatory diagnosis is not only totally misconceived but the inverse of the truth,” according to Karsh.

“If poverty and marginalization were indeed the culprits, why did Arab dissidence increase dramatically with the vast improvement in Arab standard of living in the 1970s and 1980s? Why did it escalate into an open uprising in October 2000— after a decade that saw government allocations to Arab municipalities grow by 550 percent and the number of Arab civil servants nearly treble? And why did it spiral into a far more violent insurrection in May 2021—after yet another decade of massive government investment in the Arab sector?”

Karsh notes that the latest riots were closely coordinated with Hamas, as evidenced among other things by their cessation as soon as the Gaza hostilities ended. Israeli Arabs now possess “the means and intent to produce large-scale terrorism that will disrupt the routine of life within the country, both of the civilians and of the security forces” – to the point that in a future war, the IDF would avoid moving forces and equipment through the Wadi Ara highway for fear that this central transport artery would be blocked by neighboring Arab towns and villages.

A SOMEWHAT LESS alarmist but equally disturbing study on Israeli Arabs was published this week by the Jerusalem Center for Public Affairs, led by Dr. Dore Gold. In this 200-page study, Brig. Gen. (res.) Yossi Kuperwasser argues that alongside a desire to benefit from integration economically and sociologically, there is a deep-rooted ideological consciousness among Israeli Arabs that rejects Zionism and the Jewish right to a homeland in Israel. He writes that the hard-core Islamist rejectionists have been making headway in radicalizing Israeli Arabs.

In a close study of Ra’am leader Mansour Abbas, Lt. Col. (res.) Jonathan D. Halevi of the JCPA finds that Abbas’ political pragmatism (evidenced by his partnership in the current government) has deep roots in Moslem Brotherhood ideology. This means that he is not a refreshing, long-term Israeli Arab ally for building the Jewish-democratic State of Israel.

Nadav Shragai tracks the resurgence of the “Nakba” (disaster) narrative and the demand for an Arab “right of return” in the fullest-imaginable magnitude – among Israeli Arabs. These demands have moved from refugee camp residents and descendants on the margins of Palestinian society into the mainstream, he finds.

Arab scholar Pinchas Inbari notes that Bedouin leaders are literally begging Israeli authorities to crack down on the radical Islamic preachers and Arab criminal gangs that have turned the Negev into the Wild West. The double-whammy of Bedouin poverty and societal lawlessness requires even more massive government investment and establishment of an Israeli “national guard” corps to rule effectively, he says.

In the end, hostile outside actors like the UN and Amnesty International capitalize on Israeli Arab rioting and Bedouin complaints to “prove” how discriminatory Israel is, warns General Kuperwasser. And the Palestinian Authority leverages Amnesty’s “apartheid” charge both to egg-on Israeli Arab radicals (thus fueling the forces of radicalization) and to advance Ramallah’s campaign to criminalize Israel in international legal institutions.

The bottom line: It is high time to impose more obligations and responsibilities on this country’s minority populations, while investing in their advancement too. Not to punish them, but to encourage their good citizenship and better integration, and to rule effectively. This will be a painful but long overdue, process. Get started now.

PrevPrevious‘Settler violence’ is isolated, Palestinian violence is daily
NextWho is afraid of the Abraham Accords?Next