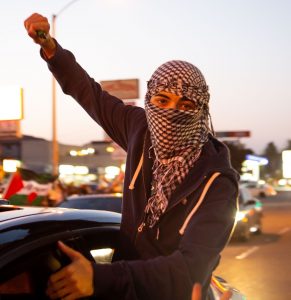 There has been a lot of kerfuffle lately about “settler violence” in Judea and Samaria, focusing on recent “settler rampages” in Huwara and Burin (south of Nablus) and attacks on Palestinians harvesting their olive crop.

The UN has an entire bureaucracy (the United Nations Office for the Coordination of Humanitarian Affairs, OCHA) devoted to cataloguing the “precipitous rise in settler violence.” It has a “Special Rapporteur on the Situation of Human Rights in the Palestinian Territory occupied since 1967” who harps on “settler violence” non-stop, as well. The UN says that in the first ten months of 2021 (latest statistics available) there were 410 attacks by settlers against Palestinians – 302 attacks against property and 108 against individuals.

“We urge the entire Israeli government to unite in strong condemnation against these acts, to work decisively to hold those responsible accountable, and to confront the growing threats posed by these extremists with the determination and seriousness that this grave situation requires,” they wrote. The violent incidents damage “Israel’s image and relations with the US government, American people, and American Jewry,” and Israeli democracy, the letter states.

These American Jewish groups are correct, of course, to expect Israeli security forces to do everything possible to protect non-violent Palestinians from violent Israelis, and to prosecute Jewish extremists in Judea and Samaria – whether they be less than a minyan, a few dozen, or hundreds of extremists. I am sure that 99.99% of Israelis feel the same.

As Bennett said to The Jerusalem Post last week, “In my view, this violence by Jews, which does not reflect the half million normative Israeli citizens in Judea and Samaria, is shameful, and whoever does it wants to dismantle Israeli statehood… I will not allow this to continue.” Indeed, in December he convened Israeli security chiefs and ordered them to use all the tools necessary to put an end to such violence.

Foreign Minister Lapid responded this week to the Jewish organizations, also assuring them that Israel is cracking down on violence against Palestinians. At the same time, Lapid warned that “we should not allow (reports of such violence) to be abused to tarnish the entire State of Israel or to be manipulated by those who seek to delegitimize the State of Israel.”

LAPID’S CAVEAT is in place not just because “settler violence” is not representative of most Israelis and most settlers. Lapid’s caveat is in place because the focus on isolated settler violence (yes, in the grand scheme of things we are speaking of isolated incidents!) obscures the far greater violence perpetrated in the West Bank every single day by extremist Palestinians against non-violent Israelis.

According to an important new study published this week – which unsurprisingly was ignored by the global media, by the UN, by “human rights” NGOs, and even by American Jewish organizations – over the past year there were over 4,000 rock and bomb throwing incidents in Judea and Samaria, perpetrated by Palestinian extremists and terrorists against Israeli Jews.

Worse still – according to the study authors, Lt. Col. (res.) Yaron Buskila and Lt. Col. (res.) Maurice Hirsch of “Habithonistim: Israel’s Defense and Security Forum” – is that the Israeli prosecution and courts have done much too little to deter and punish Palestinian perpetrators of violence.

In 95% of the rock and bomb throwing cases brought before Israeli civilian and military courts in 2019-2020, the sentences handed down against perpetrators were far below the maximum sentences possible in Israeli law. Some sentences were miniscule, amounting only to days of incarceration.

Buskila and Hirsch of Habithonistim warn that such laxity in prosecution and punishment of Palestinian attackers poses a real threat to Israeli security.

“These attacks are no longer just a tactical nuisance; they have become a strategic challenge for Israel. They are a street-level expression of a broader Palestinian and Islamist attack against Israel led by the Palestinian Authority and Hamas, and they provide tailwind to it.”

“These attacks, and the insufficient Israeli operational and legal response to them, sap the sense of personal security for Israeli civilians, and reinforce the sense of ‘successful jihad’ against Israel for Palestinian extremists.”

Col. Hirsch, who was head of IDF military prosecution in Judea and Samaria until 2016, adds that Palestinian terrorists are incentivized twice over to commit acts of violence: once by weak Israeli prosecution, and once again by the Palestinian Authority’s pay-for-slay program, which provides NIS 600 million a year in salaries for jailed terrorists and their families.

Col. (res.) Amir Avivi, CEO of Habithonistim, believes that the entire issue of “settler violence” has been blown out of proportion by ill-meaning NGOs and European governments, and this certainly this is true when compared to Palestinian attacks on Israelis. “Without meaning to diminish the ugliness of extremist attacks on Palestinians,” he says, “300 or so attacks a year against Palestinian property and 100 attacks against individuals pales in comparison to 4,000 Palestinian rock and bomb attacks a year aimed at killing Israeli civilians!”

“And 300 attacks on property and 100 attacks against individuals committed by a few extremists at the fringes of a half-million-person strong and peaceful community of Israelis who live over the Green Line calculates to a level of violence that is lower than the level of violence (by Israelis against Israelis) that afflicts greater Tel Aviv.”

GIVEN SUCH dangerous and escalating Palestinian violence, and given Israel’s weak response to such violence, one would expect to hear (but disappointedly cannot hear) a call from American Jewish organizations for an Israeli crackdown.

“We urge the entire Israeli government to unite and work decisively to hold those responsible accountable, and to confront the growing threats posed by these Palestinian extremists with the determination and seriousness that this grave situation requires” – they might have written in a public letter.

“We are deeply pained by the many violent incidents that literally threaten the lives of Jewish men, women, and children peacefully driving the roads of Biblical Israel on their way to work and school every day. Moreover, allowing the continuation and intensification of such violence damages the possibilities for peace between the majorities of Israelis and Palestinians who truly desire such peace” – they might have written in a public letter.

Is this too much to ask? How about a little more concern for the safety and lives of Israeli civilians caught in the slingshots and gunsights of Palestinian terrorists, not just concern for the wellbeing of Palestinian villagers targeted by a few Israeli extremists? (And yes, it bears repeating: Even one such extremist is too many!)

In this vein, it is not late for liberal American Jewish organizations to pen another, more loving public letter to Israeli leaders. They might also want to write (and write first) to the American government, insisting that Washington use its aid levers to force an end to Palestinian attacks; so that Palestinian leaders terminate financial support for, and glorification of, terrorist attacks on Israelis.