There is no diplomatic tsunami

The specter of Israel’s sequestration and boycott by the world is exaggerated, often purposefully so by the Israeli Left. This includes Foreign Minister Yair Lapid, who this week warned that Israel had better open a diplomatic dialogue with the Palestinians, otherwise the threat of Israel being designated an “apartheid state” will grow severe. You would think that BDS and lawfare are greater “threats” than, say, the Biden administration’s capitulation to Iran on the nuclear issue!

NOTE TO SUBSCRIBERS: Over the past month, a glitch has prevented the email distribution of my columns every Friday. The columns you missed are here:

Below is today’s new column: There is no diplomatic tsunami 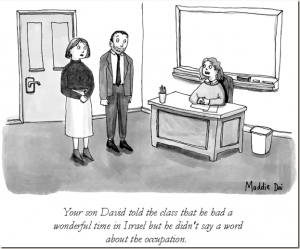 (January 7, 2022) Foreign Minister Yair Lapid this week warned that Israel had better open a diplomatic dialogue with, and make concessions to, the Palestinians, otherwise the threat of Israel being designated an “apartheid state” will grow severe.

Lapid was taking a page out of his predecessor’s playbook, former foreign minister and “minister for the promotion of the diplomatic process” Tzipi Livni. Her modus operandi back in 2013-2014 (when Israel’s foreign relations supposedly were “crashing”; when the international diplomatic noose purportedly was “tightening around Israel’s neck”) was to wail every day about Israel’s impending isolation because of the looming Western boycott of Israel.

The Boycott, Divestment and Sanctions (BDS) and “lawfare” movements were everywhere and overwhelming, according to Livni. Israel was about to be hit with unprecedented diplomatic, economic, and academic chill – unless, of course, Israel snapped quickly to Livni’s tune of withdrawal from the West Bank and conceded a state to the Palestinians.

Then-finance minister Yair Lapid chimed-in back then too with a shabbily concocted report that confirmed Livni’s premonitions. Lapid warned that the pocketbook of every Israeli was going to be hit hard by Western BDS activity unless Israel scurried to then-US Secretary of State John Kerry’s camp and hurried to cut a deal with the Palestinians.

In fact, the “threat” of a global boycott against Israel was so obsessively talked about those days that you might have thought it a greater threat than the growth of Iranian forces on Israel’s borders.

It turned out that this was manifest nonsense. The menace of BDS and lawfare were deliberately overstated and wildly overestimated. They were largely artificial threats manufactured by the Israeli Left and magnified a thousand times over by media repetition; unsubstantiated doom and gloom to scare the Israeli public into retreat and withdrawal.

This trick has been tried time and time again. In 2013, former prime ministers Ehud Barak and Ehud Olmert warned of a “diplomatic tsunami” that would befall Israel if the Palestinians went ahead and got their “statehood” approved by the United Nations General Assembly. In panic, they urged Israel to make radical diplomatic concessions to prevent the disaster.

Well, the Palestinians got their vote and their upgraded UN status, yet the sky did not fall-in on Israel.

Today, Lapid is attempting the same trick: Create a bogeyman (the threat of Israel being declared an “apartheid state” by the UN Human Rights Council or some other biased and irrelevant body) to frighten the Israeli public into adopting a fatalistic narrative and making unwarranted concessions to the Palestinians.

In fact, this “threat” is being so obsessively talked about that you would think it a greater threat than, say, the Biden administration’s capitulation to Iran on the nuclear issue.

Yediot Ahronot has been riding the boycott “threat” for years too, with obsessive coverage of the BDS phenomenon worldwide and a broad selection of commentary on how to tackle the “existential threat” to Israel.

The reasons for Yediot’s laser-like focus on the BDS issue are clear. Firstly, BDS is good business for Yediot. It sells lots of newspapers. Israelis are duly concerned about BDS attacks on Israel and Zionism. Secondly, Yediot’s take on the BDS phenomena is heavily colored by the paper’s anti-Netanyahu and left-wing agenda.

In parallel, politicians on the Israeli right-wing have at times reverted to such scare tactics as well. They and some right-wing activists in the world Jewish community increasingly seem happy to shrei gevalt, to cry boycott, because it provides evidence that antisemites who want to dismantle Israel are everywhere – as the right always has warned. To circle the wagons and rally the troops, the Right is wrongfully elevating BDS from nuisance to “existential threat.”

THERE ARE MANY REASONS why the nightmarish scenarios of BDS are inaccurate, including the weakness of the Arab world, the declining clout of Europe, the resilience of Israel’s reputation amongst democratic elites in North America, the robustness Israel’s structural ties to global technology and business hubs, and more.

In short, BDS is a problem but it remains a mosquito size movement, while Israel is a scientific, academic, business, and cultural juggernaut. Consequently, the specter of Israel’s sequestration and boycott by the world is overblown.

Indeed, an Israeli foreign ministry survey of several years ago showed that BDS receives scant attention in the Western media. BDS gets news coverage mainly in Jewish and pro-Israel media! Jews fret about it, then agonize, ponder, and pontificate – “perhaps Israel isn’t so moral after all?”

A focus on BDS and lawfare is incorrect and unwise for an additional reason: It perpetuates a skewed perspective on the changing Mideast. It prolongs the view that Palestinian-Israeli conflict is the crux of the region’s problems when that is no longer the case.

Specifically, the Abraham Accords give lie to the charge that Israel is the cause of Mideast turmoil and strife. Just the opposite is true: Many Arab nations now see Israel as an anchor of stability and prosperity for the region. Arab countries and Israel are partnered in a joint battle against the real cause of regional (and global) turmoil: Radical Islam of both the Shiite and Sunni variants.

Moreover, if the Emiratis, Bahrainis, and Moroccans are trading enthusiastically with Israel, and Jordan gets most of its water and electricity from Israel (as do the Palestinians), why should Westerners boycott Israel?!

In sum, BDS and lawfare are problems that can be contained. They are not a “great struggle,” nor a “war,” nor an “existential threat” – all hyperbolic terms that once again were rashly bandied about this week by Israeli leaders of left.

So, halt the hysterical handwringing about BDS. This only lends undeserved profile to a movement that thrives on such attention. It feeds the monster, saps Israeli and Jewish self-confidence, and creates self-fulfilling prophesies about Israel’s “isolation.”

Israel should be able to make its diplomatic-security decisions free of false threats; without having to mollify fidgety forecasters of doomsday.