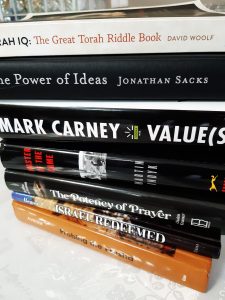 2034: A Novel of the Next World War by Admiral James Stavridis and Elliot Ackerman (Penguin) makes it clear how slippage into tactical nuclear war is eminently possible, through miscalculation, hubris, and ideological stridency. In this realistic, frightening novel, China and Iran defeat America in a tactical nuclear shoot-out. Tens of millions of people are incinerated in San Diego and Shanghai, and millions more die of radiation poisoning in wretched refugee camps. America sinks into depression and becomes dependent on international aid, while India and Russia take its place as global powerbrokers.

Antiquities by Cynthia Ozick (Knopf), who is the greatest American fiction novelist of the current era, is a window into the subtle antisemitism of New England just a generation or two ago. It is a tale marked by Ozick’s trademark passion for myth, memory, and illusion wrapped in soaring language, alongside penetrating critique of contemporary society and its attitudes to Jews.

Global Elites and National Citizens: The Attack of the Upper Classes on Israel’s Democracy, by Dr. Gadi Taub (Hebrew, Shibboleth: Sella Meir and Tikvah) is a fierce critique of what the author sees as post-nationalist and post-modernist attempts to denude Israel of its core ethnic, religious, and Zionist roots as the homeland of the Jewish People; hijacking legal, cultural and other systems to this end.

Israel Journey: Eight Days in One of the World’s Most Complex Countries, by Michael Bauer (self-published) is a travel guide that reads like a novel, written by one this country’s most sophisticated travel educators, as he leads young journalists through Israel while discussing its religion, history, geopolitics, economics, culture and more.

Israel Redeemed: Inspiration for the Jewish Festivals, by Rabbi Dov Begon (Urim), is a Religious Zionist publication par excellence, focusing on Yom Haatzmaut, Yom Yerushalayim, Yom HaZikaron, and more. Begon is the founder and long-time head of Machon Meir, a yeshiva for baalei teshuva in Jerusalem. He has mentored thousands of Israelis, and yet, believe it or not, no book of his speeches and writings has been published until now, in any language. (My brother, who teaches at Machon Meir, edited this book in honor of Rabbi Begon’s 80th birthday.)

Joseph: The Story of Dreams, by Rabbi Prof. Jonathan Grossman (Hebrew, Herzog/Tevunot and Yediot/Chemed) is the fourth and final book on Genesis by this most outstanding Biblical scholar. (Previous volumes were Bereisheet, Abraham, and Jacob.) Grossman’s intricate literary analysis pays careful attention to story structure and key words, and elucidates the family, moral, and theological dilemmas embedded in the Biblical account. Grossman also has just published a massive volume on the spiritual meaning of sacrifices, based on close textual analysis of Leviticus.

Master of the Game: Henry Kissinger and the Art of Middle East Diplomacy, by Amb. Martin Indyk (Knopf) is an important piece of historical scholarship where the author (Indyk) does teshuva, repentance. Based on extensive interviews with Kissinger and newly available archives relating to the 1973-75 US led peace negotiations, Indyk’s main takeaway is that Kissinger’s incremental approach to drawing Israel and Arab actors together is the better design, not the shoot-for-the-moon approach of the Clinton and Obama years – of which Indyk himself was a central figure.

Probing the Parasha, by Prof. Nathan Aviezer (Ktav) is the famous physics professor’s attempt to offer 85 novel pshat interpretations of the Torah; understandings that are based on the literal meaning of Biblical verses, and relating to matters like rainbows, dreams, love, sacrifices, war, miracles, alien gods, number counts, and talking donkeys. Aviezer’s three celebrated books on science and faith have been translated into nine languages and made into educational films.

Repentance for Life, the fifth book by Rabbi Steven Pruzansky (Kodesh) explores eighteen dimensions of teshuva, repentance, as it relates to happiness, suffering, peace, children, charity, free will, forgiveness, fear of sin, the World to Come, the hidden things in life, humility, the land of Israel, love of Jews, and other aspects of life. Pruzansky’s absolute mastery of both classic and modern Jewish sources is breathtaking, and he weaves them into powerful sermons.

The Potency of Prayer, by Rabbi Chaim Kramer (Breslov Institute) is a comprehensive explanation of the daily prayers based on the teachings of Rebbe Nachman of Breslov and his closest disciple, Reb Noson. It is a blend of straightforward commentary and Kabbalistic insights focusing on the structure, order, and meaning of set prayers; making the argument that prayer itself is the key to salvation “because G-d deeply desires us to turn to Him.” The author has penned dozens of previous books on Breslov teachings. (My wife edited this latest book).

The Power of Ideas: Words of Faith and Wisdom, by Jonathan Sacks (Hodder & Stoughton) is a posthumous collection of the former chief rabbi’s BBC radio addresses, House of Lords speeches, lectures, columns in The Times, and other newspaper articles from 2000-2018. Sacks had incisive comment on everything from antisemitism to religious animal slaughter, from criminal justice to natural disasters, and from royal weddings to parenthood. This wonderful volume demonstrates the timeless nature and continued relevance of Rabbi Sacks’ thought and teachings. 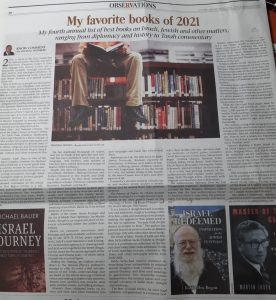 The Story of Israeli Politics, by Amit Segal (Hebrew, self-published) is a runaway best-seller that studies the key decision-making moments of Israeli prime ministers Ben-Gurion, Meir, Begin, Shamir, Peres, Rabin, Barak, Sharon, Olmert, Netanyahu, Bennett, and Eshkol (in that order). It is a fun and probing analysis of the undercurrents that explain Israeli politics from 1948 through today, illustrated with original caricatures by Amos Biderman.

The Authoritarian Moment: How the Left Weaponized America’s Institutions Against Dissent, by Ben Shapiro (HarperCollins) argues that the true authoritarian threat to America doesn’t come from the political right, but from the supposedly anti-fascist left. Shapiro warns that the “totalitarian left” (a.k.a. the “woke” world) is ascendant in nearly every area of American life and is aggressively insistent that everyone must conform to its values, demanding submission and conformity. He views such “cancel culture” as the greatest threat to liberty and freedom of thought.

To Repair a Broken World: The Life of Henrietta Szold, Founder of Hadassah, by Prof. Dvora Hacohen (Harvard) offers a peek into the precarious early years of the pre-state Yishuv in Palestine (– the book is worth reading for this alone!), and the epic yet anguished life of the founder of Hadassah Women’s Organization. Hacohen draws upon Szold’s voluminous personal diaries and extensive global correspondence (– she is the first scholar to have researched them) to reveal the pioneer leader’s aches, anxieties, and many hard-fought professional victories as well as her depressing personal world.

Torah IQ: The Great Torah Riddle Book, by David Woolf (self-published) offers more than 1,500 questions and answers on the weekly Torah readings, Jewish holidays and law, and other Torah trivia, appropriately arranged for different ages and levels of knowledge. The author, a long-time synagogue youth activities leader (and a close friend of mine), brings to the task an encyclopedic command of midrash, Talmud, and halacha, alongside wit, humor, and a knack for brainteasers. This is a book that you will want to bring to every Shabbat table!

Value(s): Building a Better World for All, by Mark Carney (jointly published by Penguin, HarperCollins, and PublicAffairs) is an extended call for leadership that will channel the value of the market back into the service of the values of humanity. One important chapter relates to the twin crises of health and economics wrought by Covid-19. This forward-looking manifesto was written by a deep scholar of economics and an experienced practitioner of politics who cares about moral values. Carney was governor of the Bank of Canada and of the Bank of England, and today is the UN Special Envoy on Climate Action and Finance.