If the police went after those who fire-bomb Israeli buses with the prosecutorial zeal applied to Nir Hefetz, the country would be a lot safer. 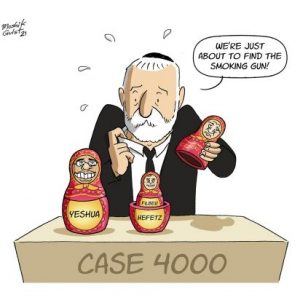 During the ongoing bribery and corruption trial of former Prime Minister Netanyahu, it has become clear that the prosecution’s star witness was near brow-beaten to death by the Israel Police. Nir Hefetz, an aide to former prime minister Benjamin Netanyahu, was pressured to testify against his boss by super-zealous investigators and prosecutors who used every muscular trick in their books to break Hefetz down.

I do not know whether this was justified or legal, nor whether this taints Hefetz’s testimony regarding Netanyahu. The Netanyahu trial is not my current focus. My interest here is only in police tactics and tenacity from a comparative perspective.

Hefetz was coerced by police into being a state witness by threats to expose a romance with woman who was not his wife, by placing him in a jail cell with crazed and murderous Arab criminals who were told that Hefetz worked for Netanyahu, by denying him needed medical attention as well as decent food and sleep, and by numerous other threats.

“Police psychological and physical threats to me reached monstrous proportions,” Hefetz testified, which is backed up by videos of his interrogations that were broadcast in court.

One interrogator warned Hefetz that “We’re going to bomb you in the coming days like you can’t imagine. We will undermine the foundations of your world and destroy your life. You have no idea how powerful we are. We’re not just the police. We are Lahav 433 (i.e., Israel’s version of the FBI). We have powers and methods of operation like the General Security Services (i.e., the Shin Bet, which spies on and interrogates Palestinian terrorists).”

“We have and will overturn every corner of your life. Every hidden and secret part of your life will be put on the table. There is a high likelihood that after we’re done with you, your kids will spurn you, and your wife too. They will not want to have anything to do with you. If you refuse to cooperate with our investigation, your family unit will be blown apart by what we have to expose.”

There is much more, but you get the picture. Police invested thousands of hours in investigating, intimidating, criminalizing, and bullying Nir Hefetz. When the police want a result, they know how to get it.

My demand of the Israel Police and Attorney General’s office: Get some grit, muster-up some muscle, put aside what I suspect is political bias, and focus intensively on combating much more concrete threats to Israeli sovereignty and society than the picadilloes of the Prime Minister’s Office.

HOW I WISH that the Israel Police would devote the same robust resolve, steadfastness, craftiness, and even brutality to fighting crime and Arab terror across this country.

If the police went after those who stone Israeli buses, fire-bomb Israeli cars, stab young mothers walking their kids to school in Jerusalem, block roads with burning tires in the Galilee and Negev, rampage through mixed Moslem-Jewish cities, vandalize public infrastructures, pinch electrical power and water from public grids, and steal weaponry from IDF bases – with anything resembling the toughness and prosecutorial zeal applied to Nir Hefetz, then the country would be a lot, lot safer.

Netanyahu might slither off the hook, but Israel would survive as a better, securer, sounder society.

If the police went after those who stone Israeli buses, fire-bomb Israeli cars, stab young mothers walking their kids to school in Jerusalem, block roads with burning tires in the Galilee and Negev, rampage through mixed Moslem-Jewish cities, vandalize public infrastructures, pinch electrical power and water from public grids, and steal weaponry from IDF bases – with anything resembling the toughness and prosecutorial zeal applied to Nir Hefetz, then the country would be a lot, lot safer.

Alas, Israel has mafias which are eating away at national sovereignty and good government. This includes economic cartels and criminal rackets that wrench Israel from its moorings as a just and free country.

For years, Israeli Arab community leaders have begged the Israeli Police to aggressively crush these criminal cartels (whose gun-supply grids fuel widespread domestic violence among Israeli Arabs), but the Israel Police has been afraid of confronting these gangs.

Or perhaps the police force is just distracted by “more important” investigations like those into Nir Hefetz’s sexual affairs and Benjamin Netanyahu’s champagne consumption habits and media manipulation techniques.

Just consider the ongoing series of criminal arsons in the Galilee over recent months in the Galilee. Read the shocking report published in August by the State Comptroller on anarchy in the Negev including the never-ending theft of arms and equipment from IDF bases in the south.

These are chronic illnesses that have festered for years, which undermine Israeli authority and make life hell for Jewish, Moslem, and Christian Israelis. Yet there is no national plan for dealing with such lawless mayhem. As mentioned, police officers are busy beating-up on Nir Hefetz and others like him.

Even when there is a comprehensive and munificently funded Israeli national plan for dealing with such problems – such as the multiple Israeli plans to settle Bedouin land claims in the Negev and halt the helter-skelter Bedouin sprawl over massive tracts of land in the south – these plans are scuttled by Arab criminal gangs and the radical Islamist organizations to which they often are connected.

Alas, no Israeli minister of internal security or police chief has had the guts to wage all-out war against the protection gangs and Islamist criminal-terrorist networks. Israeli government and police officials prefer to continue to try and “manage” the situation; to keep a lid on things without root-canal treatment. And to focus on easier-to-bully white-collar criminals like Nir Hefetz.

Another example of police malfeasance is its capitulation to gang-land Arab behavior on the Temple Mount in Jerusalem. The police always prefer to “maintain public order” on the Mount instead of acting determinedly against Arab assaults on Israel and on Jewish history. This has led Israel to ignore decades of outrageous and provocative Moslem moves on the mount; assaults which are escalating all the time.

Wakf and Islamic movement provocateurs have attacked Jewish visitors to the Mount and Jewish worshipers at the Western Wall below the Mount. The Wakf also has conducted vast and illegal construction projects on the Mount and beneath it, willfully destroying centuries of Jewish archaeological treasures. ISIS, Hamas, and Turkish flags are allowed to fly defiantly on the Temple Mount. The Wakf even has allowed Palestinian terrorists to smuggle guns onto the Mount, who have attacked police guarding the gates of the Mount and then fled into the shrines on the Mount under Wakf protection.

In short, radical Palestinian and Islamic actors have turned the Mount into a base of hostile operations against Israel, while the Israel Police uses kid gloves, if at all, against such violence.

Unsurprisingly, Israel’s restraint in all things related to the Temple Mount has not improved the situation. Just the opposite is true. In the face of Israeli hesitancy and timidity Israel’s enemies have ratcheted-up their attacks, and their propaganda assaults. Even the most cautious police actions on the Mount are now immediately termed “flagrant desecration of the holy Al Aqsa Mosque,” with the “holy mosque” now said to encompass the entire Temple Mount Plaza and “all its walls.”

Obviously, there are other reasons (societal, political, and diplomatic) for police caution when handling lawlessness among Israel’s minority communities, or Arab violence on the Temple Mount. My comparison to police behavior in handling Netanyahu and Hefetz (and Aryeh Deri and others) is not picture-perfect. And prosecuting criminals on all fronts is certainly necessary.

But my demand of the Israel Police and Attorney General’s office remains on target: Get some grit, muster-up some muscle, put aside what I suspect is political bias, and focus intensively on combating much more concrete threats to Israeli sovereignty and society than the picadilloes of the Prime Minister’s Office.