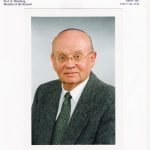 Today, 1 Tevet, is my father’s 15th yahrtzeit. Had he still been with us, I am certain that my father, Prof. Henry (Zvi Meir) Weinberg z”l, would have much to say about the current state of world Jewry and the assault of modern antisemitism against the Jewish People. Below are two articles about him that I have previously published, which give a sense of his views and incredible life story. Yehi zichro baruch.

My father, Prof. Henry Weinberg, warned decades ago of a snowballing assault on Israel as an “apartheid” and “illegal” state; and of enemy attempts to divide the Jewish People.

A personal story for Yom Hashoah: About a kvitel, a little prayer note, that connects five generations of my family; from my great-grandfather, Dov Beirish Weinberg of Krakow, to my eldest daughter, Ariella Rachel Weinberg of Jerusalem.