Jews are incontrovertibly native in Hebron and Jerusalem

Palestinians are stuck in a rejectionist, denialist time warp. Say “Happy Chanukah” to push back; to axiomatically acknowledge Jewish indigenous rights in Jerusalem, in Hebron, and everywhere else in the Land of Israel. 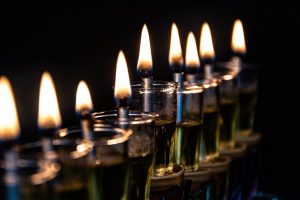 On the first night of Chanukah, President Isaac Herzog lit Chanukah candles in Maarat HaMachpela, the Cave of the Patriarchs in Hebron. “The historic connection of Jews to Hebron, to the tomb of the patriarch, to the heritage of the patriarchs and matriarchs is unquestionable. Recognition of this connection must be beyond all controversy,” he said.

Herzog went on to offer this message of peace: “Especially today, and especially here, in this holy space dedicated to all sons of Abraham, we have to continue dreaming of peace, between all faiths and creeds in this land, and to condemn any type of hatred or violence.”

But this was unacceptable to radical Palestinians. Hussein Al Sheikh, a top Palestinian official, called the visit a “political, moral and religious provocation.” Hamas threatened violence.

Herzog’s seemingly natural visit was an abomination to some radical leftist Israelis too. Breaking the Silence, a group of former Israeli soldiers who rabidly oppose Israel’s presence in Judea and Samaria (the West Bank), accused Herzog of “giving an official seal of approval to the obscene reality of occupation and the people perpetuating it.”

The Peace Now movement said: “The settlement in Hebron is the ugliest face of Israeli control over the territories. It is inconceivable that the president, who is supposed to be a unifying figure, would choose, of all places, to light a candle in a place that has become a stronghold of oppression and violence.” And Haaretz accused Herzog of playing politics, of “building his political base for a 2028 run as prime minister.”

These radicals play right into the ongoing “denialism” campaign of Mahmoud Abbas’ Palestinian Authority; to deny the Jewish and Zionist historic connection to the Land of Israel.

Last Wednesday, the United Nations General Assembly approved a PA-sponsored resolution 129-11 that disavowed Jewish ties to the Temple Mount and called it solely by its Moslem name, al-Haram al-Sharif. The text, referred to as the “Jerusalem resolution,” is part of a push by the Palestinian Authority to rebrand Judaism’s most holy site as an exclusively Islamic one. This jives with UNESCO’s adoption of nonsensical resolutions declaring Jerusalem an exclusively Moslem heritage city and criminalizing Israel’s custodianship of the holy city.

(Three years ago, all 28 EU countries voted for the Jerusalem resolution. This year, several of them changed their votes. Hungary and the Czech Republic opposed the resolution, while Austria, Bulgaria, Denmark, Germany, Lithuania, the Netherlands, Romania, Slovakia, and Slovenia abstained, as did the UK. Australia, Canada, the US, and a few others opposed the resolution.)

When the resolution was first passed, then-US Ambassador to Israel David Friedman responded by tweeting that “More than 2,000 years ago, Jewish patriots (Maccabees) captured Jerusalem, purified the Holy Temple and rededicated it as a house of Jewish worship. The UN can’t vote away the facts: Jerusalem is the ancient and modern capital of Israel. Happy Chanukah from this blessed city!”

This didn’t sit well with Ireland’s then-Foreign Minister Simon Coveney – a constant critic of Israel – whose Irish parliamentary colleagues have made it a crime to import or sell goods originating in settlements and eastern Jerusalem.

Coveney accused the US of being “provocative and biased,” and “unhelpful in creating the necessary environment of compromise” in the search for Israeli-Palestinian peace.

Coveney’s brand of perfidy makes it even more necessary that Israel re-assert its sovereign rights in Hebron, Jerusalem, and especially on the Temple Mount – which, after all, is where the Chanukah struggle was centered some 2,000 years ago.

Consider: Over the past ten years, and certainly since he rejected John Kerry’s 2014 peace initiative, Mahmoud Abbas’ Palestinian Authority has been on an outrageous path; an assault on the core identity of Jews and Israelis; an offensive to deny the most fundamental, basic building blocks of Jewish connection to Jerusalem and the Land of Israel.

Abbas initiated the shameful and spurious UNGA and UNESCO resolutions. He falsely accuses Israel of committing “violations” against Islamic and Christian holy sites, including the Al-Aqsa Mosque on the Temple Mount – when it is his Wakf (Moslem Religious Trust) that has turned Al-Aqsa into an armed fortress and turned every Jewish visit to Judaism’s holiest site into a skirmish.

It is Abbas’ Wakf that wantonly has dug-up and destroyed thousands of years of Jewish archeological treasures on the Temple Mount – and the world has stood by without protest. And the muftis he has appointed completely deny that any Jewish temple ever stood in Jerusalem.

Some Western leaders have swallowed every bit of Abbas’ bile about exclusive Arab rights in Jerusalem, while ignoring Palestinian denial of Christian history in Jerusalem.

What do you do in the face of such betrayal, and when confronted by UN condemnations of Israel, and only Israel, for obstruction of peace diplomacy? What do you do when the Big Lie is evident everywhere?

You act to introduce realism and truth-telling to the global and regional dynamic by reasserting the Jewish People’s profound historic and national rights in Jerusalem.

It doesn’t have to be that difficult. Jewish prayer can be cautiously and modestly facilitated in some symbolic way on the Temple Mount without threatening or overshadowing the two large Moslem structures there. It should be possible to arrange a time-sharing agreement for worshippers, like that in place at the Cave of the Patriarchs in Hebron, or to establish a small synagogue tucked away on the fringes of the vast, and mostly unused, Temple Mount plaza.

These initiatives will engender Palestinian (and American and European) resistance, but with both resoluteness and sensitivity Israel can succeed and overcome the opposition. The Bennett-Lapid government will enjoy widespread public backing for action to buttress Israel’s stake in its age-old and modern capital city.

Next Chanukah, the Israeli education, tourism, and religious affairs ministries should run a broadscale campaign to bring tens of thousands of Israeli visitors (if not worshippers) to the Temple Mount, for guided tours in the footsteps of the priestly loyal and militarily heroic Maccabees.