Giving thanks for Israel and its wonderful wines

The Israeli wine revolution is an undeniable, stark indication of support from the Heavens. This week, I enjoyed the wines of the Galilee and Golan, on a “Kosher Travelers” food and wine tour. 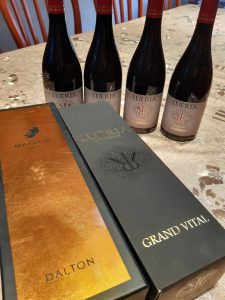 I am just back from a three-day Thanksgiving week food and wine tour of northern Israel. I truly give thanks to the Heavens for the unusually warm and bright late fall weather, the magnificent sunrises over the Sea of Galilee and the sunsets from atop the Golan, the sophisticated group of “Kosher Travelers” Anglo Israelis who participated, and the luscious wines of the Galilee and Golan.

To me, quality grape-growing and winemaking is more than simply another Israeli “start-up nation” agricultural innovation. Rather, the Israeli wine revolution is a sign of Divine favor; what Jewish tradition calls a siman muvhak – an undeniable, stark indication of support from the Heavens.

Consider the following: In the heyday of King Solomon’s reign in the 10th century BCE, it is said that “Judah and Israel dwelt safely, every man under his vine and under his fig tree, from Dan to Beersheba” (1Kings 5:5). Wine played a central role in Temple libations and celebrations, and in all community festivities. And in recent years, Israeli archaeologists have discovered hundreds of ancient wine presses and wine-storage amphorae from the First and Second Commonwealth periods.

After the destruction of the Second Temple in 70 CE, Jewish agriculture and viticulture in the Land of Israel went into decline, and in the seventh century the Muslim conquerors of the Holy Land ripped every grapevine out of the ground. This put an end to wine production for hundreds of years, while the Land of Israel lay desolate and neglected. Just 150 years ago, Mark Twain visited the Land of Israel and noted how utterly barren he found it.

Despite all this, modern Israel has become an internationally acclaimed wine center—just 151 years after Zeev Teperberg led the first Jewish grape harvest of modern times, and 131 years after Baron Edmond de Rothschild’s first harvest. How and why?

Some would start to answer this question by speaking of climate, soil conditions, well-trained grape growers, and creative winemakers – all of which are worthy topics. But I would prefer to look to the patriarch Jacob, who prophesied on his deathbed that, in the Land of Israel, wine would become so abundant that Judah “shall wash his garments in wine and his clothes in the blood of grapes” and “his eyes will be shot red with wine” (Genesis 49:11-12).

Centuries later, the prophet Ezekiel declared that in the days of redemption God would command the mountains of the Holy Land to “shoot forth your branches and yield your fruit to My people Israel; for they will soon come.”

It seems, then, that these biblical prophecies are coming true. Over the past century, the Land of Israel has awakened, giving forth fruit to its indigenous people, the Jewish People, as it returns to and renews its ancient homeland.

It is as if the Heavens have commanded the long dormant and deep-rooted vineyards of Israel to grow. It is as if the vineyards awoke from hibernation, stretched their roots and smiled, turning little dusty, nearly dead Israel into a verdant agricultural world superpower. This includes every fruit and vegetable from almond and apple to asparagus and avocado, and finest of all – grapes!

As the Talmudic sage Rabbi Abba taught (Sanhedrin 98a): Ein lecha keitz meguleh mizeh! “There is no greater revealed sign of redemption than the agricultural re-blooming of the Land of Israel!”

Many centuries later, the great halachist Rabbi Yoel Sirkis wrote mystically that the Shechina, the Divine Presence, enters the Jewish soul through the agricultural produce of the Land of Israel. (Bach on Tur Orach Chaim 208.)

In short, I am overwhelmed at the “redemption” involved in Israel’s modern wine revolution. For me, there are biblical and Zionist echoes in every glass of good Israeli wine, and drinking it is a deep profession of faith. It is a celebration of the People, Land, and God of Israel reunified. A true opportunity for thanksgiving.

ALLOW ME to highlight five wonderful wineries in northern Israel, all kosher.

The most pleasant discovery for me were the wines of Dalton. Under proprietor and CEO Alex Haruni and his young, brilliant winemaker Guy Eshel, Dalton has been transformed into high-quality winemaker.

Dalton’s “Wild One” crisp Chenin Blanc is crafted by using three different fermentation techniques. The Elkosh single-vineyard free-run Shiraz is soft and silky with medium tannins. The high-end Galilo and Matatia blended flagship wines are outstanding examples of the micro-climate and terroir of the Upper Galilee.

Dalton’s incredible “Anna” sweet dessert wine tastes like the finest, alcoholized pure Canadian maple syrup. (Grab a few bottles, if you can, of this limited-edition wine when it is re-released in the spring.) 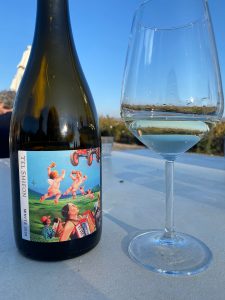 A newly kosher quality micro-producer I discovered was Tel Shifon estate winery on Kibbutz Ortal at the foot of Mt. Bental in the Golan. The wines are adorned with a whimsical painting of pioneer farmers playing accordions in the vineyards while winged babies and tractors fly in the skies. The Chardonnay-Sauvignon Blanc white blend, and the Rose made from Cab Franc, Cab Sauvignon, and Syrah that we tasted while walking through the adjacent vineyards were super smooth, firm, and fresh wines.

Gidi Sayada’s Lueria winery in Safsufa (just north of Meron) is a favorite of mine. The alcohol levels and oak influence are kept in check, allowing the fruit to dominate. Standout wines are the new Gewurztraminer (elegant), Roussane (crisp), and especially Barbera (fruity) varietals, and the single vineyard Syrah (long tannins and somewhat sweet). We drank the flagship Lueria Grand Vital (a chewy, round, and elegant blend of Cabernet, Merlot and Cab Franc) at my grandson’s brit milah last year. The 2018 vintage was just released. (Store for many years.)

Tal Pelter’s kosher Matar wines (from Kibbutz Ein Zivan on the Golan) are always excellent (although unfortunately the winery does not seem set-up to properly provide a good group-tasting experience). The Stratus is a peppery Shiraz (an excellent pairing for Shabbat cholent). The Cumulus is a splendid example of how close Israeli wines can come to the classic Bordeaux blend.

A visit to Tulip Winery in Kiryat Tivon, which involves the mentally handicapped adults of “Kfar Tikva” (the village of hope) in its operations, always is a special experience. I particularly enjoyed the Vintner’s Special Edition Chardonnay, a lightly oaked, exacting, and aromatic wine.

Like many Israeli wineries, Tulip is moving into making Mediterranean-style wines using varietals indigenous to the Rhone Valley in France and other southern grape-growing areas in Spain and Italy. I am an enthusiastic fan of this trend.

To further develop this wine-making style, Tulip created a boutique sub-label called MAIA (an acronym for Mediterranean Approach Israeli Art.) The MAIA red is superbly well-crafted, delicate, and satisfying blend of Carignan, Syrah, and Mourvedre (known as a CSM blend).

Ein lecha keitz meguleh mizeh! There is no greater revealed sign of redemption than these wonderful Israel wines.