The discourse about Israel in Dubai and Ramallah couldn’t be more different: cooperation versus confrontation, celebration versus demonization. 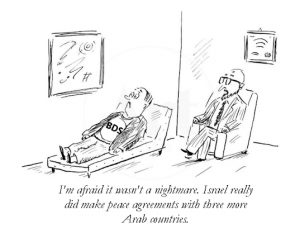 Also this month, Israel for the first time took part in a joint Red Sea naval drill together with the US, UAE, and Bahrain. The historic joint exercise, held under the auspices of the US Fifth Fleet (which is headquartered in Bahrain), occurred as Iran held a major war exercise near the Strait of Hormuz, a naval chokepoint through which passes some 20 percent of the world’s oil. Israeli navy officers met with their Bahraini, Emirati, and American counterparts onboard the same ships.

Concurrently, senior Israeli and the Emirati officials began negotiations on a free-trade agreement. Trade between Israel and the UAE already has exceeded $500 million, with venture capitalists from the Gulf from scouting-out joint investment opportunities in cybersecurity, fintech, aggrotech, food security, educational technology, and healthcare. Trade is expected to double this year and hit over $3 billion within three to five years. The two countries have signed 25 agreements in 15 sectors.

Moving beyond the Arabian Gulf, Israel and Jordan signed an agreement this week to enhance cooperation in the areas of energy and water; an agreement mediated US Special Envoy for Climate John Kerry, Emirati Climate Change Envoy Sultan Al Jaber, and “EcoPeace Middle East” activists. Israel will examine the construction of a designated desalination plant to export more water to Jordan at full price, and Jordan will consider building a new solar field in the desert in Jordan to export clean energy to Israel.

Finally, group of 15 Republican American Jewish leaders paid a visit to the Kingdom of Saudi Arabia to try to advance normalization between Riyadh and Jerusalem. They were received by top Saudi princes and officials.

This is the new Middle East blessedly created by the “Abraham Accords.” Unfortunately, it is not a “tale of two cities.” The peace dynamic runs from Jerusalem all the way to far away Dubai (and Manama and Rabat, etc.), but it does not extend from Jerusalem to nearby Ramallah.

RAMALLAH: The Palestinian Authority’s highest religious authority, Grand Mufti Muhammad Hussein, assured Palestinian Authority television viewers that the destruction of Israel, and the “liberation” of Jerusalem and “its return to Islam,” is only a matter of time. That same Grand Mufti issued a fatwa forbidding Muslims who come via the UAE to pray at the Al-Aqsa Mosque on the Temple Mount in Jerusalem.

Then Palestinian Authority TV broadcast a filler between programs which spoke of the fact that “history has never let the colonialist remain, and the occupiers have always left in the end. One day they [the Jews], too, will return to where they came from.”

A magazine published by Fatah’s youth movement and distributed in Palestinian Authority schools called Waed regularly demonizes Israel and incites to violence (according to Palestinian Media Watch report released this week). It gushes about “the giant Israeli murder machine” and “the Israeli monster,” and accuses Israel of behaving like Nazis. Palestinians have a “right to wage an armed struggle to take back its stolen homeland,” according to this official propaganda organ.

Archeological evidence of Jewish history in the Land of Israel is presented by Waed as Palestinian artifacts, such as a coin with ancient Hebrew script on it being called ancient Palestinian currency. Israelis are called “foreigners who came from all ends of the earth…who did not know Palestine and did not live in it – neither them nor their fathers and forefathers,” as well as “invading Jews.”

Thus, it is no surprise that PA President Mahmoud Abbas gives one rambling, semi-coherent speech after another where he calls Israel “brutal” and “colonial,” accuses it of “ethnic cleansing” and “extrajudicial executions,” and rages wildly about “racist gangs of settlers.” He libels Israel as possessing “a culture of racism, incitement and hatred, and rants dangerously about non-existent Israeli “aggression and provocations against the Holy Al-Aqsa Mosque and Christian sanctuaries in Jerusalem.”

He pledges fealty to the PA’s “pay-for-slay” policy, the monthly payments to terrorists in prison and the families of terrorists killed while carrying-out acts of terrorism against Israel. (The stipend rises with the terrorists’ prison sentences; they get paid more if they kill, rather than maim, their victims.)

He leaves no room for real negotiation while engaging in wholesale denial of Jewish national rights in the Holy Land, including the repeated introduction of international resolutions that explicitly dismiss Jewish history in Jerusalem and Zion.

In fact, PA-controlled newspapers and social media accounts regularly sermonize about transience and permanence, calling Israelis abiroun (transient) and Palestinians bakoun (those who remain). The message is clear: Eventually, Israel will be broken.

Abbas is obstructionist in every way, leading to his marginalization. He has betrayed everyone: Palestinians, who were supposed to enjoy democratic self-rule and good governance; Israel, which was supposed to get a peace partner; and the Arab world, which was to be freed of debilitating conflict with Israel in favor of mutually beneficial cooperation in security, economic, and humanitarian matters.

And yet, despite Abbas’ sabotage and obstructionism, the Bennett-Lapid government this week asked the international community to increase investment in the West Bank and even in Hamas-controlled Gaza – for the betterment of Palestinians and to help build stability for both Palestinians and Israelis.

At the Ad Hoc Liaison Committee for funding to the PA meeting in Oslo (how woefully fitting!), Israeli Regional Cooperation Minister Esawi Frej urged the Palestinian Authority to take advantage of economic benefits offered it through the Abraham Accords. He also presented several initiatives that could fill the PA coffers, including an electronic VAT system that would ease custom collections. This could save Ramallah NIS 100 million a year.

Alas, PA Prime Minister Mohammed Shtayyeh angrily rejected all such forms of cooperation with Israel, instead regurgitating libels against Israel; essentially vowing everlasting war against the “apartheid” Jewish state. Unlike Frej, he was incapable of talking coexistence, compromise, and cooperation.

As a result, Abbas and Shtayyeh are missing the opportunity of their lifetimes to lift Palestinians from the depths of impoverished self-pity and political retardation to the heights of enlightened self-rule and material advancement.

In short, the discourse about Israel in Dubai and Ramallah couldn’t be more different: cooperation versus confrontation, celebration versus demonization. I’m just saying. How very sad.