It is all about Iran

Biden is braying about Jerusalem, Palestinians, and settlements mainly to force Bennett into submission regarding Iran. He is signaling to Bennett: Shut-up about the nuclear deal and don’t you dare try to scuttle it, or else the US will make your life miserable on the Palestinian front. 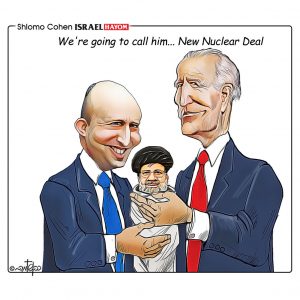 Last week, the Biden administration issued its harshest public rebuke yet of Jewish life in Judea and Samaria, expressing “deep concern” about Israeli plans to build some 3,000 “settlement units.”

“We strongly oppose the expansion of settlements, which is completely inconsistent with efforts to lower tensions and to ensure calm, and it damages the prospects for a two-state solution… We also view plans for the retroactive legalization of illegal outposts as unacceptable,” said the State Department spokesman.

That same US spokesman also sniffed that “We believe respect for human rights, fundamental freedoms, and a strong civil society are critically important for responsible and responsive governance,” implying Israel does not share that belief because it outlawed six Palestinian terrorist-backed NGOs.

Two weeks ago, while sitting opposite Israeli foreign minister Yair Lapid, Secretary of State Tony Blinken affirmed that the US intends to re-open a consulate in Jerusalem that deals with Palestinians – which essentially is an embassy to the Palestinian Authority. This consulate was closed by the Trump administration when it recognized Israel’s full sovereignty in Jerusalem and moved the US embassy from Tel Aviv to Jerusalem.

Why would the Biden administration start bullying Israel about these matters now? Why bark about Jerusalem, Palestinians, and settlements when even the most left-wing officials in the administration know that the obstinate and corrupt Palestinian Authority deserves absolutely no awards from Washington and that there is no realistic peace process in the offing?

What advantage does Washington gain by talking-up a plan to re-establish the former US mission to the Palestinians on Agron Street (in western Jerusalem!) when it knows that this is an ultimate diplomatic insult to Israel, and is a “red line” issue for Israelis across a broad left-right consensus?

Moreover, pushing this issue could bring down the Bennett-Lapid government, which replaced the Netanyahu governments that the administration was so happy to see go!

And why threaten to act with such diplomatic chutzpah when the Bennett-Lapid government has the clear ability under international law to block the re-opening of this unconventional US mission in Jerusalem?

Some analysts seek to explain these unfriendly moves by pointing to the fact that these positions are popular with extreme left, or “woke,” faction in US Democratic politics, which is growing in power. Or that these moves are part of the administration’s expected pushback against Trump-era shifts that knocked US policy off the holy grail of “balance” in Israeli-Palestinian affairs.

There may be some element of such motivations at play, but I think that these explanations are insufficient. After all, as mentioned above, even the administration officials most ideologically committed to the so-called “two state solution” know that the sclerotic Palestinian Authority currently deserves absolutely no prizes and that there is no realistic peace process in the offing. Which means that beating-up on Israel is superfluous.

IN MY VIEW, the explanation for the Biden administration’s escalation of tensions with Israel lies in a completely different realm. It is a function of the impending (and ruinous) Biden nuclear deal with Iran.

Biden is signaling to Bennett: Shut-up about the nuclear deal and don’t you dare try to scuttle it, or else the US will make your life miserable on the Palestinian front.

In other words, Biden is braying about Jerusalem, Palestinians, and settlements mainly to force Bennett into submission regarding Iran.

Make no mistake about it. Despite Iranian rhetoric about never again signing any deal with the “Great Satan” and Iranian attacks on US and other targets in the Gulf, the Biden administration is closer than ever to a new/old agreement with Iran.

Washington and the other P5+1 countries will once again sign-off on an accord that allows Iran’s nuclear enrichment infrastructure and other military weaponization projects to remain intact (although perhaps be somewhat slowed). They will drop all sanctions against Tehran.

Doing so and getting the Iran nuclear bomb “file” off its agenda and “out of the way” – in other words, kicking the can down the road – is a central goal of the current administration.

It is insistent on doing so, even though this essentially abandons Israel and its regional Arab allies to face Iran on their own, for two reasons. First, political revenge. Because President Trump savaged President Obama’s signature foreign policy “achievement,” the 2015 JCPOA nuclear agreement with Iran.

And thus, the Biden administration is not going to let Israeli or other critics get in its way. The best route to ensuring Israeli acquiescence to a Biden-Khamenei deal, in practice if not in declaration, is by threatening US distancing from Israel on Palestinian matters.

Unfortunately, this is a substantial threat. Israel wants and needs quiet on the Palestinian front for many reasons: to help broker emergence of younger, less radical, and less corrupt Palestinian leadership in the West Bank; to allow the Abraham Accords circle of peace to grow; to ensure that the revolutionary “Trump Plan” contours for an eventual Israeli-Palestinian settlement sink-in; and to expand its trade and scientific ties around the world.

The Bennett-Lapid government also needs quiet on the Palestinian front for its own basic political survival.

Alas, all this gives Biden significant leverage against Israel on the Iranian nuclear matter, which is truly the ultimate, mega-strategic, even existential, issue on the US-Israeli agenda.

Bennett and Lapid cannot capitulate to the Biden administration regarding Iran. If necessary, they must hack the heat on Palestinian issues and keep objecting to renewal of the JCPOA while preparing to tackle Iran directly.

They also cannot yield to US regarding the proposed consulate/embassy to the Palestinians in Jerusalem, nor the rightful outlawing of terrorist-supported NGOs, nor Israel’s inherent right to support Jewish life in Judea through “natural growth” in existing Israeli towns (a.k.a. “settlements”).

IN THIS CONTEXT, it is worth reiterating some basic realties about settlements that I’m sure Biden administration officials know (but are pleased to ignore for the moment, for the tactical reason described above).

First, Israeli settlements in Judea and Samaria neither explain Palestinian unwillingness to make peace with Israel, nor justify radical Islam’s jihad on Jerusalem. Similarly, freezing or rolling back some settlements will not bring peace with the Palestinians (– it certainly didn’t in Gaza), nor calm the convulsing Arab Middle East. Lambs will not lie down with lions no matter how times Washington, the EU, and the UN insentiently condemn “settlement units.”

Second, settlements haven’t scuttled any previous negotiating effort; Palestinian obduracy and extremism has. Prime Minister Netanyahu’s right-wing governments from 2009 until 2021 applied a restrictive approach to settlement building; much more restrictive than the previous governments of Ehud Olmert, Ariel Sharon, and Ehud Barak over the years 2000-2008.

Netanyahu even froze settlement construction all-together for ten months – the only Israeli leader ever to do so – yet the Palestinians spurned talks with Israel for most of that period, with no reciprocal concessions.

Third, most Israeli housing starts over the past decade have been in cities within settlement “blocks” that Israel intends keep under all circumstances – and “everybody knows” this! This includes Gush Etzion, Ariel-Elkana-Karnei Shomron, Maale Adumim, Beitar Ilit, and Modiin Ilit (Kiryat Sefer). In fact, the significant government-initiated building has been in the latter two Haredi cities; cities that are stably situated in Israel’s future.

Sooner or later, Israel unilaterally will extend its rule of law to Jewish communities in Judea and Samaria, solidifying the de facto territorial compromise that already is in place – and the world will learn to live with that.