A gripping biography of Henrietta Szold

A window into the precarious early years of the Jewish community in pre-Israel Palestine, and the epic yet anguished life of the founder of Hadassah. 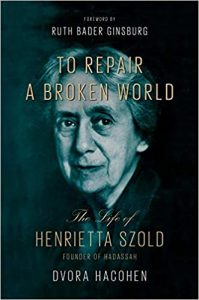 World War II was raging in Europe and the Red Army was advancing toward Berlin, but the front-page headlines in all Hebrew newspapers in pre-state Israel on February 14, 1945, and for several subsequent days were about the passing of Henrietta Szold.

Carrying her bier to burial were Chaim Weizmann, Yitzhak Ben-Zvi, and Judah Magnes. Attending were David Ben-Gurion, Sephardi Chief Rabbi Uziel, representatives of the British High Commissioner, Christian and Moslem officials, diplomats, and thousands of people from all walks of the Yishuv, ranging from university professors to kibbutz members, teachers and nurses, and hundreds of Youth Aliyah children. The largest funeral ever seen in Jerusalem at that time.

Szold lived a heroic life. Born in Baltimore in 1860 to Orthodox Hungarian Jewish immigrants, she was dismissed by many of her contemporaries as an overeducated and overachieving American Jewish woman, and she certainly was underappreciated. Despite this, she boldly founded Hadassah in 1912, the preeminent women’s Zionist organization.

In 1920, at age 60 when most people near retirement, she set off for Palestine, and vigorously took on the health and education portfolios for the Yishuv’s Jewish National Council. In 1933 she founded Youth Aliyah, the rescue and resettlement agency for Jewish children of the war years.

This scholarly and fascinating biography of Szold artfully crafted by Prof. Dvora Hacohen of Bar-Ilan University’s Modern Jewish History department is a window into Szold’s somewhat tormented soul; into her many unacknowledged accomplishments during her US years; and into the celebrity status she earned in Israel. (Did you know that Mother’s Day in Israel is celebrated on her birthday, and that Szold’s visage was on the Israeli five Lira banknote?)

Hacohen’s biography of Szold is simultaneously a window into the precarious early years of the Jewish community in pre-Israel Palestine – including its abject poverty, the many Arab riots it suffered, its internecine quarrels, its punishing suffering under the British, and more. (Living in Israel today, it is hard to believe how backward and deprived the Yishuv was just 100 years ago. The book is worth reading just for this vivid portrayal of the Yishuv’s travails!)

Hacohen draws upon Szold’s voluminous personal diaries and extensive global correspondence (– she is the first scholar to have researched them) to reveal the pioneer leader’s aches, anxieties, and many hard-fought professional victories, as well as her depressing personal world. She never married, which was a source of frustration throughout her life. In fact, Hacohen suggests that a shattering romantic rejection in 1909 was the catalyst that, after a significant period of depression, led Szold to “open a new chapter in her life,” founding Hadassah a few years later and beginning 30 years of constant travel to and from the US and Palestine.

Szold’s US achievements are even more impressive since in those years the role of women in public life, including Jewish communal life, was relegated to the “back of the bus.” She played the central role in development of the Jewish Publication Society of America (JPS) around the turn of the century and was part of the orbit of scholars at the Jewish Theological Seminary (JTS). But in both places, she was paid only a pittance and her name was omitted from many articles she wrote, edited, and translated (aside from an occasional “H.S.” in endnotes).

It was only in the pre-State Yishuv in Palestine that her indomitable drive for humanitarian and welfare work was finally recognized.

Hacohen’s book tells the stressful story of the first nurses and doctors that Hadassah sent to Jerusalem; of the well-baby clinics that Szold pioneered (“Tipat Chalav,” which dominate childcare in Israel through today); of the network of educational, agricultural, and health institutions she fundraised for and built during the decades leading up to 1948; and of the way that Szold navigated intractable problems between religious and secular Jews and between Jews and Arabs. She insisted on equal access for all, a principle that underlies the work of Hadassah medical centers in Israel ever since.

In her later years, despite health problems and chronic financial worries, Szold immersed herself in helping desperate German Jewish parents who wished to send their children out of Germany following the rise of Hitler. She crisscrossed the country to convince kibbutz leaders to house these children and help them adjust, while persuading reluctant British diplomats to allow into Palestine 30,000 unaccompanied children rescued from the clutches of the Nazis and horrors of the Holocaust. And she raised the funds for this, including transportation costs, thus founding the Youth Aliyah network.

It was during her research for a previous prize-winning book on Youth Aliyah that Prof. Hacohen was drawn to the story of Szold’s epic yet anguished life. “What I discovered,” writes Hacohen, “was the figure of Henrietta Szold in all its richness and depth, as well as the winding path she followed to the pinnacle of 21st century Jewish leadership.”

And yet, on her deathbed, Szold took a jaundiced view of her own leadership achievements. She told her close friend Judah Magnes (an extreme binationalist who was the first chancellor of the Hebrew University of Jerusalem) that “I lived a rich life, but not a happy life.” 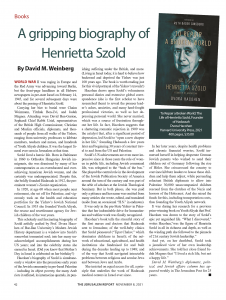