One of the great bioethicists of our time, Tendler showed how religion and science must be synthesized for the betterment of mankind. 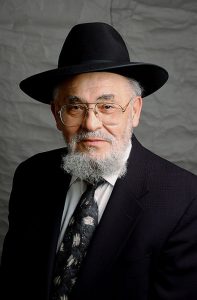 The late, great moral philosopher, Rabbi Dr. Lord Jonathan Sacks of Great Britain, famously argued that there is no conflict between religion and modern science because they are two separate (but equally essential) realms and neither negates the other.

Sacks: “They are as unlike as poetry and prose, or song and speech, or a portrait of a person and an MRI scan… Science takes things apart to see how they work. Religion puts things together to see what they mean. And we need them both, the way we need the two hemispheres of the brain.”

“Science sees the underlying order of the physical world. Religion hears the music beneath the noise. Science is the conquest of ignorance. Religion is the redemption of solitude.”

So according to Sacks, we need both religion and science, although they are worlds completely apart.

But there is another view: That science and religious faith converge. That they can be synthesized into a comprehensive worldview that teaches humility and awe. That harmonized, they provide a guide to ethical behavior in a world that has lost almost all moral anchors and where science is galloping forward into the unknown at breakneck speed.

In traditional Jewish circles, this synthesis is called the “Torah Umadda” approach (combining Jewish law and theology with science), and in this generation there was no better exemplar of that approach than Rabbi Dr. Moshe David Tendler, who passed away last week in New York at age 95. Every molecule and fiber of his being reflected an unbreakable bond between the religious and scientific realms.

Tendler was a professor of microbiology and Jewish medical ethics at Yeshiva University in NYC, a distinguished clinical cancer researcher, one of America’s leading bioethicists, and a president of the Association of Orthodox Jewish Scientists. He chaired the bioethical commission of the Rabbinical Council of America and the Medical Ethics Task Force of UJA-Federation of Greater New York.

Simultaneously, he was a yeshiva dean, a community rabbi in Monsey, NY for over five decades, and an unassailable expert in halacha (Jewish law). He wrote Medical Ethics: A Compendium of Jewish Moral, Ethical and Religious Principles, a book that long has become the standard Jewish text for hospitals and medical professionals, inside and outside the Jewish world.

Tendler also was the essential, accessible “Rabbi Doctor” pastoral guide for thousands of Jews in times of medical crisis. Every day, he fielded dozens of calls from around the world about complicated issues of Jewish law and medicine, especially issues relating to abortion, artificial insemination, contraception, end of life issues, organ transplantation, and the definition of death.

Tendler’s contributions to the world of medical halacha were magnified by the advisory and collaborative role he served with his father-in-law, the most prominent halachic decision-maker of the 20th century, Rabbi Moshe Feinstein OBM.

Tendler was Rabbi Feinstein’s interpreter, translator, and transmitter of medical knowledge. He played an indispensable and integral role in the medical halachic decisions rendered by “Rav Moshe,” especially his critical and perhaps ever most controversial decision, regarding brain death. With the encouragement of Tendler, Rabbi Feinstein accepted brain death as an acceptable religious definition of death, serving the purposes of organ transplantation.

However, none were as uniquely positioned to move the needle of the appreciation for science in the religious world and of the respect for religion among their fellow scientists – as was Rabbi Dr. Moshe D. Tendler. He empowered Jews everywhere to value the wonderful and complex interface between science and religion, and he demonstrated the value of this fusion for the non-Jewish world too.

Writing in the Tradition journal online this week, one of Tendler’s students told an anecdote about his mentor’s holistic approach to Torah and science. Dr. John Loike, Interim Director of Bioethics at New York Medical College and Professor of Biology at Touro College, relates that when Tendler first began teaching biology, he would have his students peer into their microscopes to view slides of a human cell, and ask them to describe what they observed.

One student would say that he saw the nucleus of the cell, another would comment on the lysosomes, and a third would describe the structure of the plasma membrane. Rabbi Dr. Tendler always was disappointed with these responses and remarked that the students were both poor scientists and deficient as “observant” Jews because they did not see the real picture.

Torah-educated students should have derived an important conclusion from viewing a human cell under a microscope, Tendler would say: The palpable sensation of encountering God as the creator of life. Just as the patriarch Abraham recognized God when he viewed the stars in the sky, we also should recognize that He created this world through our observation of the microscopic human cell and appreciate the divine beauty of biology.

Rabbi Dr. Tendler z”l is survived by eight children, many grandchildren and great-grandchildren, many disciples (doctors, scientists, and Torah scholars), and many published works that will remain classics for decades to come. May his memory spur in the future an even finer synthesis between science and religion.