For the moment, the Bennett-Lapid government seems to answer the desire of many Israelis for leadership that is neither radical left nor radical right, neither anti-religious nor obnoxiously religious-coercive, neither feeble nor fierce. And it has six real achievements so far. 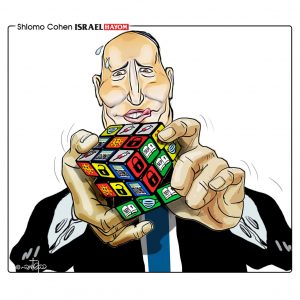 Readers of right-wing, national religious, and Ultra-Orthodox press are being told that the first 100 days of the Bennett-Lapid government have been a disaster, a catastrophe of historic and unforgivable proportions.

Funny, but I feel that the opposite is true. Prime Minister Naftali Bennett’s scorecard is shipshape; inevitably mixed, but assuredly positive. He leads a government that is about to pass a responsible budget (for the first time in four years), and which has brought some stability and sanity to Israeli politics for at least a short- to medium-term period.

And whatever this government’s contradictions and limitations, I sense that most of the Israeli public does not hanker for another government anchored by the belligerent Benjamin Netanyahu and backed by shrill yes-men in Likud and cantankerous Ultra-Orthodox partners.

In the following six categories, the Bennett government gets decent marks.

The new government has proven that there is life for Israel after Benjamin Netanyahu. Even Netanyahu is replaceable. Doomsday has not descended upon Israel following his departure from Balfour.

Of course, it was predictable that Israel’s enemies would act to test any new Israeli leader, which explains Hamas’ aggressions on the Gaza border and in the West Bank. But Bennett has demonstrated principled continuity in Israeli foreign and defense policy, which explains why Iran, the IRGC, and Hezbollah haven’t dared to escalate their ongoing confrontation with Israel.

There is life for Israel after Benjamin Netanyahu. Even Netanyahu is replaceable. Doomsday has not descended upon Israel following his departure from Balfour.

Moreover, Israel’s global diplomatic ties have not collapsed. Sure, Netanyahu deftly masterminded the expansion of Israel’s strategic ties to Russia, China, India, Gulf and African nations. He disproved and defied the political left’s warnings/threats of inevitable isolation and strangulating boycott because of stalemate with the Palestinians. But Bennett and Foreign Minister Yair Lapid have acted swiftly to step into Netanyahu’s big shoes and maintain this momentum, while improving Israel’s ties to Jordan, Egypt, and the US.

Neither Bennett nor Lapid has the finesse and gravitas of Netanyahu on the world stage. But Bennett’s mini-speech last month in President Biden’s Oval Office and his address this week in the UN General Assembly embarrassed nobody.

On the contrary: Bennett was occasionally eloquent, powered by conviction, unabashedly proud of his right-wing and religious roots, and both polite and defiant in appropriate measures and contexts.

I’ll also admit that I am pleased to see a prime minister of Israel wearing a kippa – Israel’s first openly religious/Orthodox head of government. To Biden, he quoted Isaiah 49:18 about the sons and daughters of the Jewish people coming back to rebuild their ancient and indigenous homeland. At the UN, Bennett spoke of “bringing the heritage of Torah to life in modern-day Israel,” and quoted a pithy Jewish saying (attributed to Rabbeinu Bachya and previous Lubavitcher rebbes) that “a little bit of light dispels much darkness.”

Bennett also has reignited a discourse of respect and appreciation in Israel-Diaspora relations, without backing away from his right-wing and religious principles.

From the get-go, pundits predicted that the new government would be a self-neutered, immobilized entity; powerless to make substantive policy changes. That may be true in some areas (like matters relating to Judea and Samaria – see below), but this was the known price of establishing such a diverse and broad government. And despite that, the government is about to pass an intelligent budget in Knesset.

The new budget is no mean feat. Netanyahu failed/refused to present a budget for a very long time, holding good governance hostage to his political dilemmas. The new budget as presented by Finance Minister Avigdor Lieberman is logical and responsible. It is not a socialist giveaway despite the Labor and Meretz components in the coalition, nor does it impose high new taxes as Netanyahu assuredly would have. It seeks to deregulate important sectors of the economy, while investing in healthcare, education, and defense as so desperately needed.

As for Likud’s slogans of delegitimization against the new government – that it relies for support on the anti-Zionist Islamists of the Raam Party and on a fringe faction with only six seats in Knesset (Bennett’s Yamina Party), meaning that Bennett has no right to be prime minister – well, this is poppycock.

It was Netanyahu who (wrongly or rightly) first proposed bringing Raam into government, as a Likud coalition partner. And if Bennett managed to reach the prime minister’s office with only six seats in parliament while Netanyahu couldn’t do so even though he held 30 seats – then perhaps Bennett should be credited with superior political wizardry, not chicanery.

Religious Affairs Minister Matan Kahana’s proposed restructuring of the kashrut and conversion systems, and the government’s proposed changes in military draft law relating to haredi yeshiva students (bringing the exemption age down to 21), are for the state religious bureaucracy’s own good as well as the healthy future of Orthodoxy and Ultra-Orthodoxy in this country.

It is not at all certain that all the proposed changes will be passed or implemented because the haredi-controlled Rabbinate unwisely has sworn to scuttle them, but I am hopeful that some adjustments will stick and that the principles they are based on (transparency, competition, moderation) will prevail over the long term.

And in the meantime, sitting in opposition for a while may do the haredi parties some good. A healthy dose of humble pie.

Only time will tell whether Bennett’s corona policy gambles have been wise: introducing a third coronavirus vaccination (booster shot) ahead of every other country in the world, and keeping the economy and schools open despite the tough fourth (Delta variant) wave of the pandemic. But you can’t deny that Bennett’s controversial decisions evince leadership.

Of one thing I am reasonably certain: Had Netanyahu still been in the prime minister’s office, he would have locked down all Israelis at home for the entire High Holiday period. This would have dealt death blows to many businesses; cost the government billions of shekels in support payments and lost tax income; and led to a renewed crisis between the broad public and the haredi and Arab sectors (which would have defied the lockdown and undermined its effectiveness, as they did last year).

Can you imagine? It’s been almost half a year, and most Israelis have no need to know the names of the prime minister’s wife or his kids, and none of them issue foul tweets against other politicians and against journalists.

There also is much less vitriol between government ministers despite the deep ideological chasms, say, between Raam and Yamina. In recent months, almost nobody is calling settlers “criminals,” haredi Jews “parasites,” Israeli Arabs “terrorists,” right-wingers “fascists,” and left-wingers “traitors.” Even Avigdor Lieberman and Nitzan Horowitz mostly have kept their demagoguery in check. Incitement against domestic political “enemies” is at an all-time low.

Indeed, bringing about a climate of relative internal political calm is perhaps the greatest contribution of this government. The coalition may be an incongruous creation stemming from force majeure. But the restraining of Israel’s raging political fevers after 32 months of furious campaigning is a good thing.

Bringing about a climate of relative internal political calm is perhaps the greatest contribution of this government.

Israel needs and is getting fetters on its political passions, which had gone wildly out of whack. National “unity,” however temporary and fragile, along with a change of leadership after 15 years, is necessary and worthwhile.

For the moment, this government seems to answer the desire of many Israelis for leadership that is neither radical left nor radical right, neither anti-religious nor obnoxiously religious-coercive, neither feeble nor fierce – except when dealing with Israel’s real enemies outside the country, towards whom Israel must remain uncompromising.

IF THERE ARE QUESTION MARKS hanging over this government’s conduct, they relate to the struggle against Iran and against hostile Palestinians.

Israel must show that blocking Iran’s hegemonic and nuclear ambitions was not just a pet project of Prime Minister Netanyahu but is a consensus Israeli national security and diplomatic priority.

Bennett talks the talk (at the UN: “Israel doesn’t have the privilege of tiring in the struggle against Iran. We will not allow Iran to acquire a nuclear weapon”), but whether he is prepared to act in defiance of American and world opinion and to actively sabotage a renewed JCPOA remains an open question.

Similarly, it is unclear whether this government can or will preserve what is left of Israel’s de facto sovereign control in Area C of Judea and Samaria, by dismantling illegal Bedouin and Palestinian settlements that purposefully impinge on strategic routes and by strengthening Israeli settlement in the Jerusalem envelope and other critical/consensus areas.

Bennett has made it clear that Mahmoud Abbas’ decrepit government is not a peace partner for Israel, and therefore a two-state diplomatic scenario is on hold. He purposefully and shrewdly downplays the salience of the Palestinian conflict with Israel (other than pointing to the genocidal intentions of Hamas and Islamic Jihad, which Israel will stymie).

But as world leaders like to say, “the status quo is not sustainable” – in the sense that Israel must advance its interests in Judea and Samaria and not just push back against Palestinian assaults in the territories and in international institutions.