The Abraham Accords are solid

On the first anniversary of the Accords, don’t be begrudging or doubtful about their future. 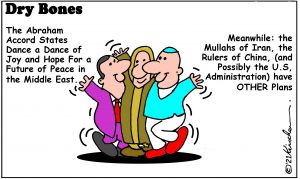 In commenting on this week’s first anniversary of the Abraham Accords, some “experts” have sought to pour cold water on the strategic advances wrought by the accords and to predict their unraveling.

The naysayers are wrong. I want to debunk three myths propagated by the doubters and explain why Israel’s ties with Gulf and African Arab countries are almost certain to prevail and prosper.

It is undeniable that Israeli ties to the United Arab Emirates and Bahrain (and to a degree with Morocco and Sudan too) have taken off at astounding speed. It is a lightening peace bonanza, a whirlwind of almost Biblical proportions.

Venture capitalists from Tel Aviv and Dubai, Abu Dhabi and Manama are scouting-out joint investment opportunities in cybersecurity, fintech, aggrotech, food security, educational technology, and healthcare. Trade between Israel and the UAE already has exceeded $500 million and is expected to double this year. The two countries have signed 25 agreements in 15 sectors.

Hundreds of Israelis in kippahs and Emiratis in long white robes and kanduras gathered in June at a Global Investment Forum in Dubai, co-sponsored by The Jerusalem Post and the Khaleej Times. These are the beginnings of real people-to-people engagement; something that Israel never has enjoyed with the publics in Egypt or Jordan.

Despite this, sourpuss pundits argue that UAE-Israel ties and the Abraham Accords writ large have changed little in the regional strategic picture. The accords failed to generate a broader, force multiplier, Israel-Sunni coalition against Iran, they say.

But this misses the point: The accords legitimized and formalized Israel-Sunni cooperation against Iran, as well as an entire range of economic, scientific, and cultural ties, and full diplomatic relations. The breakthroughs must not be minimized! Since last year, other significant Moslem countries have ramped-up their ties with Israel too, even if they haven’t gone public with the relationships.

Secondly, some grouches on the political left dismiss the Abraham Accords as a product of Trumpian razzle-dazzle that were finalized thanks only to billion-dollar arms deals and other diplomatic rewards. They predict that the accords will be short-lived and unravel at the first sign of real regional crisis.

This is a complete misread of Emirati, Bahraini and Moroccan purposes in pursuit of peace with Israel. The leaders of the countries want to redefine the self-identity and global image of Arab Moslems by blending tradition with enlightenment, anchored in an admirable discourse of religious moderation and broad-mindedness.

Affiliating with Israel fits perfectly into this agenda because this is exactly how they view Israel too – as a nation that successfully synthesizes strong ethnic and religious identity with modernity. Therefore, the Abraham Accords are deeply rooted in genuine ideological intentions and are locked-in for the long term.

“Hatred is not from God. It does not flow from logic. And hatred is not the future,” a very senior Emirati who is close to UAE Crown Prince Mohammed bin Zayed told me. “We are investing in Israel-Arab ties as a force-multiplier against hate, for the long term, for our own good as well as yours.”

To me, this sounds like a solid ideological and political basis for long-term peace with Israel, not a flash-in-the-pan arrangement that is dependent on additional American goodies nor a flimsy deal that will rapidly wash out.

THE THIRD GRIPE advanced by some observers is that the Abraham Accords cannot truly improve the strategic situation without peace between Israel and the Palestinians. And they predict that Sunni Arabs won’t deepen their ties to Israel unless and until real peace for the Palestinians is obtained.

This prediction is false. While there is no argument that an Israeli-Palestinian accord would be good for all parties, Gulf state and other Arab countries clearly are no longer beholden to the unreasonable, never-ending Palestinian struggle against Israel. In fact, they knew in advance of signing the Abraham Accords that the current Palestinian leadership is light-years away from being ready to compromise with Israel.

They knew in advance, and they know ever-more certainly one year later, that Mahmoud Abbas and his cronies have locked themselves into a doomsday loop of destruction – both commitment to Israel’s destruction and to the Palestinian People’s own obstinate self-destruction.

Note this too: By explicitly referencing the Abrahamic common heritage of Moslems and Jews in the foundational document of “The Abraham Accords”, Arab countries implicitly acknowledged that Jews are a Biblical people indigenous to the Land of Israel. This is a revolution; a blunt rejection of the ongoing Palestinian campaign to deny and criminalize the Jewish People’s historic rights in Israel.

In this context it is worth noting that the Abraham Accords passed their first stress test during the recent Israeli-Palestinian dust-up in Gaza and Jerusalem. While Gulf and Moroccan leaders issued harsh condemnations of Israel for its tough police response to Arab riots on the Temple Mount in Jerusalem, no Abraham Accord country did more than protest.

None withdrew their ambassadors from Israel, and none slowed the pace of developing economic ties. (Compare this with the Second Intifada in 2000, when Tunisia, Morocco, Oman, and Qatar dissolved their less-than-full diplomatic ties with Israel.)

Most notable of all, neither the UAE, Bahrain, Sudan, or Morocco truly criticized Israel for striking hard at Hamas in Gaza. In fact, they probably cheered this, quietly. Their mild press releases about the fighting resembled standard State Department calls for de-escalation and “restraint.” In sum, none of these Arab countries added to the diplomatic pressure on Israel in any substantive way.

THE REAL SHADOW hanging over the future of Abraham Accord-type peace treaties in the region, if there is one, comes from the incipient reconciliation between Washington and Tehran in the form a renewed nuclear deal.

If Washington goes soft on Iran’s nuclear program and dials-back its commitment to countering Iran’s regional hegemonic ambitions, it seems logical that Gulf countries will seek to further strengthen their security and diplomatic ties with Israel. Israel will remain actively engaged in a long-term shadow war and in an increasingly public war against Iran’s designs. And Israel quietly but determinedly will help protect its Gulf allies from Iranian machinations too.

But if the US takes itself out of the frontline against Iran, it also is possible that Gulf countries reluctantly will move in the other direction and bandwagon with Iran. At the very least, they may hedge their bets by minimizing open ties to Israel and the US. To a certain extent, the latter process may be underway already. For the first time in many years, the Saudis and Emiratis recently held direct and public talks with Iranian leaders.

Then there is the question of Israeli leadership. Former Prime Minister Binyamin Netanyahu personally played a key role in cultivating relations between Israel and the UAE and Bahrain, as well as unofficial ties with Saudi Arabia. The leaders of those countries knew Netanyahu well enough to talk to him about key defense and intelligence issues. They knew that his commitment to aggressively countering Iran was absolute.

Lapid has made statements supporting the JCPOA. Gantz demurred from Netanyahu’s comments about countering Iran even if the US decides to back away from confrontation. It is unclear whether Bennett will make Abraham Accord partnerships a priority. Of course, he should do so, and work to gain the confidence of Gulf leaders.