The real threats of modern antisemitism

Partisanship, “progressive” politics, legal pretexts, anti-Israel sentiment, and community divisions hamper the effort to combat surging Jew hatred. Worst of all, the surging Jew-hatred seems to have sapped the confidence of American Jews, which is, perhaps, the greatest threat of all. 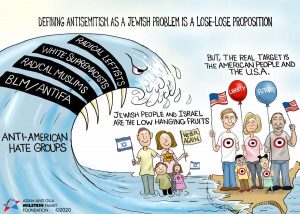 Jews gathered this week to fight antisemitism in two locations, and the very different results are telling.

In Jerusalem, several hundred NGO representatives convened for the tenth Global Forum for Combating Antisemitism, under the auspices this year of the Israeli ministries of foreign and diaspora affairs. The discussion of strategies to turn back the current tsunami of blended antisemitic and anti-Zionist expression were deep and fruitful.

In Washington DC, one hundred American Jewish organizations cooperated to organize a rally near the Capital against the same tsunami, with meager results. Only 3,000 people participated in the “No Fear” demonstration, which amounts to about 30 Jews (and non-Jews) per organization. Some hard-left American Jewish groups refused to participate all-together, because they reject the overriding message that Jewish identity and support for Israel are inseparable.

Alas, partisanship, “progressive” politics, legal pretexts, anti-Israel sentiment, and community divisions hamper the effort to combat surging Jew hatred. Worst of all, the surging Jew-hatred seems to have sapped the confidence of American Jews, which is, perhaps, the greatest threat of all.

These disturbing trends have been analyzed in a series of recent, important intellectual articles, as follows:

* False equation: The British columnist Melanie Phillip notes that even when condemning antisemitism, politicians and intellectuals feel the compunction to condemn “Islamophobia” and “all forms of racism” at the same time and in the same sentence. This politically correct refusal to acknowledge the uniqueness of antisemitism (and the overwhelming preponderance of antisemitism, above and beyond all other hatreds including anti-Moslem hatred) demonstrates precisely that Jew-hatred.

* Mainstreaming: Writing on Bari Weiss’s blog, Peter Savodnik reviews just who is speaking out against antisemitism and who is staying silent. While Michigan Democratic congresswoman Rashida Tlaib and some her “Squad” colleagues are using their notoriety to bring antisemitic policies and rhetoric into the mainstream, many news outlets are far too obsessed with the novelty of their identity or enamored by their “progressive” politics to care, he writes.

Even when Tlaib and Ilhan Omar regurgitate the “dual loyalty” charge against pro-Israel Senators – a classic antisemitic trope – the national Democratic leadership has found it hard to condemn them outright or explicitly, without wrapping rejection of the slur in the bland blanket of rejecting “all racist” language.

This is because the American left has stumbled into the bottomless rage of identity politics. “They have embraced the new racial-gender taxonomy, which reimagines thousands of years of Jewish history into a wokified diorama. Today, the conflict can only be seen through this flattening prism, with Israel playing the role of the white, colonial settler and the Palestinian that of the settler’s dark-skinned, indigenous victim.

“So now we are confronted with the spectacle of members of Congress droning-on on the House floor about how the Israeli army is somehow guilty of systemic racism and superimposing complicated ideas concocted by a French philosopher they’ve never read onto a conflict they barely comprehend.”

“Even worse, by squeezing the Israeli-Palestinian conflict into the Procrustean Bed of left-wing identitarianism, the new progressives have alienated the Jew, who, for the most part, remains attached to the Jewish State, from the American body politic. By transforming the Jewish State into a force for evil, they have forced the Jew to defend that attachment. They have created a space separating the Jew from America, and, in that space, they have legitimized violence against the Jew for defending the indefensible: Israel’s supposed apartheid, colonialism, white supremacy, ethnic cleansing, and genocide.”

* Critical Race Theory. Writing in Sapir journal, Pamela Paresky discovers that denial of antisemitism is at the core of the woke movement. Jews are “hyper-white” and therefore cannot be victims, period.

Students on campus are indoctrinated that being white, heterosexual, cisgender, middle class, and able-bodied are all associated with privilege, oppression, and domination. Only belonging to an opposing category grants you “marginalized identity” in which case you are, definitionally and proudly, oppressed.

“This reflects the nature of antisemitism: No matter the grievance or the identity of the aggrieved, Jews are held responsible. Critical race theory does not merely make it easy to demonize Jews using the language of social justice; it makes it difficult not to.”

The next jump “forward” is the Israeli-Palestinian conflict. Palestinians, unlike racist, “transnational” Zionists, do not have an army. Whatever Palestinians do in their struggle for their liberation and rights is necessary. Therefore, labeling their actions “terrorism” is the white, colonialist, imperialist propaganda of an illegitimate, apartheid country.

* Academic abdication: Writing for the Institute for the Study of Global Antisemitism and Policy (ISGAP), Prof. Sylvia Barack Fishman warns that the effect of this on campus is that a generation of young American Jews run away from Israel.

“Many of them are susceptible to the argument that Jews are ‘privileged’ and that anti-Semitism is not ‘in the same category’ as racism, sexism, and other ills. They distance themselves from the sins of white privilege not only by declaring themselves to be ‘allies’ of ‘minoritized’ non-white populations but also by condemning other, less ‘woke’ Jews. In its most extreme guises, it is as if Jews who wish to distance themselves are saying to anti-Semites: ‘Don’t hate me – I’m not that kind of a Jew’.”

* Proxy fights: In the Israel Affairs Journal, Prof. Martin Kramer convincingly argues that the movement among American academics to boycott Israel is not really aimed at Israel but rather at pro-Israel and staunchly Jewish professors. By making support for Israel verboten, the boycotting of Israel serves the aim of pushing Jewish academics out of shrinking disciplines, where Jews are belied to be over-represented.

“The debate over Israel and the Palestinians is mostly a proxy fight for the real fight. That is how diehard supporters of the Palestinians find academic allies who have no professional interest in Palestine, in fields like American studies or English literature.” This also seems to be true in fields like Jewish studies – in academic programs founded by Jewish philanthropists! – where you must be a critic of Israel to get tenure and gain academic respectability.

* Loss of American Jewish moral confidence: Finally, the most crushingly convincing recent article is by Prof. Ruth Wisse, also in Mosaic. She does a “threat assessment” for American Jewry, considering everything from Hamas-style gangs pursuing and attacking Jews in New York and Los Angeles; campus intimidation as described above; prominence of the “Squad” in Congress; and American rabbinical students “in tears” over Israel’s forcible removal of Palestinians from their homes, and scholars of Jewish studies and Israel studies who “share the pain of Gazans.”

She reaches the conclusion that none of these samples of anti-Semitism is the greatest threat to America and the Jews. Rather, the clear and present danger is loss of American Jewish moral confidence.

“Only wicked regimes organize their politics against the Jews, making Jewish resilience the touchstone of political hopefulness. If prospective Jewish leaders and teachers cannot withstand the malice, malevolence, and murderous cruelty of the [antisemitic and anti-Zionist] evildoers, they do much more than expose their fellow Jews to hurt. They let down America, the best chance that democracy ever had.”

The author was founding coordinator of the Israeli government’s Global Forum Against Antisemitism, under the leadership of Natan Sharansky in the Prime Minister’s Office, 2003-2005. This article reflects his personal views.