Bennett must beware Biden’s bearhug as the president tries to bunt the Iran nuclear problem to somebody else’s “watch.” 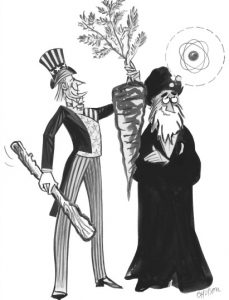 US President Joe Biden met with outgoing Israeli President Reuven Rivlin at the White House on Monday. Biden sought to assure Israel that he would not tolerate a nuclear Iran.

“What I can say to you is that Iran will never get a nuclear weapon on my watch,” Biden said. Rivlin responded that he was “very much satisfied” by Biden’s statement, and later let it be known that he was confident Biden was in Israel’s corner on this matter.

Well, not so fast. Biden’s statement is not as comforting as jolly President Rivlin seems to think. Biden’s “watch” does not last very long. Moreover, halting Iran from declaring nuclear bomb capacity over the next four or eight years while allowing Tehran to continue nuclear weapons R&D and to grow militarily stronger in every way – does not quite solve the problem.

It sounds like Biden is just kicking the can down the road, postponing the problem until somebody else is “on watch” as president – which is exactly what President Obama did. Both Obama and Biden tacked this way because the US does not want to do what is truly necessary to stop the Iranians – strike their military-nuclear complex with crushing force.

Remember: Once upon a time, Obama swore that his policy was prevention of an Iranian bomb. But in his second term he moved towards containment of an Iranian bomb. He backed away entirely from his commitment to stop Iran from gaining the capability to produce nuclear weapons.

Obama’s 2015 nuclear deal with Iran (the JCPOA: Joint Comprehensive Plan of Action) essentially left Iran several turns of the screwdriver away from “completing the fuel cycle” of enrichment for nuclear bomb manufacture. Since then, Iran has violated every aspect of the nuclear accord and arrived at one turn away of the screwdriver from the full fuel cycle.

Moreover, important aspects of JCPOA begin “sunsetting” (expiring) in just several years. In fact, that will be just a few months after Biden leaves office in 2028 (if he serves two terms). Then, Iran will be able to bore full-speed-ahead with its nuclear weaponry efforts without any international restrictions. A legal path to the bomb.

Nevertheless, Biden’s appears dead set on reengaging Iran through the flimsy JCPOA. Alas, this is nothing more than taking a rain check on confrontation with Iran until the matter becomes somebody else’s problem. A problem on somebody else’s “watch.”

Biden seems set to lift America’s most powerful economic sanctions against Iran. Then, with America’s leverage severely degraded and the mullahs strengthened by hundreds of billions of dollars in sanctions relief, “America and its European allies” supposedly are to get Tehran onboard for a “comprehensive new strategy” that does not involve building nuclear weapons. And then, America magically will negotiate a “follow-on agreement” to the JCPOA that ends Iran’s building of ICBM’s and its regional terrorist activities.

Sure thing! As if Ayatollahs Khamenei, Rouhani and Raisi will conclude with the US any follow-on agreements to abandon their 40-year effort to export the Islamic revolution, build a nuclear bomb, and dismantle Iran’s missile industry!

As if “America’s allies” (meaning, I guess, craven Europeans and contrary Russians) will not rush into business again with Iranians. Instead, these “allies” surely will cooperate with the US in pressuring Iran to adopt a “comprehensive new strategy” that does not involve attacking Israel, terrorizing the region, or building nuclear warheads. But of course!

ALAS, ONLY THOSE who believe in the tooth fairy and flying reindeer could base defense and diplomatic policy on these assumptions.

It makes no sense to move from a policy of maximum pressure on Iran to maximum concessions, and then believe the US will have leverage to negotiate a “longer, stronger, broader” deal that covers Iran’s ballistic missiles, overseas terrorism, human rights violations, etc. Tehran will have no incentive to relent if the Biden administration lifts primary and secondary sanctions, terror designations, and so on.

As Mark Dubowitz of the Foundation for the Defense of Democracies has written, “Iran will simply take the patient pathway to nuclear weapons, while immunizing its economy against the use of sanctions in the future and building up its regional dominance. Therefore, containment of Iran (through all forms of pressure) is the right policy. Billions of dollars should not be transferred to Iran for a short, weak, and narrow (renewed) nuclear deal.”

If there is nevertheless to be another deal with Iran, Biden should be pressing the Iranians to relent on five key issues: 1. A complete end to its nuclear military program, including all uranium enrichment and plutonium production – with no sunset, ever. 2. A truly intrusive international inspections regime; not the jokingly weak-to-non-existent regime stipulated in the JCPOA. 3. An end to Iran’s ballistic missile development program. 4. A retreat from the forward bases in Syria that Iran is building to challenge Israel. 5. Cessation of Iranian financing of Hamas and Hezbollah military capabilities.

Biden ought to support Israel’s ongoing “war between the wars” effort against Iranian terrorist and nuclear targets in Syria and Iraq, and in Iran itself; provide Israel with certain bunker-penetrating ordnance; and openly encourage closer military cooperation between Israel and Gulf states.

These measures would lend energy and urgency to efforts to bring Iran to heel. Short of this, a deal with Iran will be perilous and unsustainable. Iran will have no reason to change its behavior.

A renewed spirit of US-Israel cooperation with Democratic leaders in Washington is a wonderful and worthy thing. If Iran declines to re-enter the JCPOA, the US and Israel will be able to partner anew on Iran policy. But in the meantime, beware Biden’s bearhug. It can be debilitating and eviscerating. On the one issue most critical to Israel’s long-term security and safety, Jerusalem cannot relent.