The lamb and the lion

How to defend Israel: Do not claim victimhood or deny Israel’s power. After all, Israel is fighting Islamic jihadism just like the West. 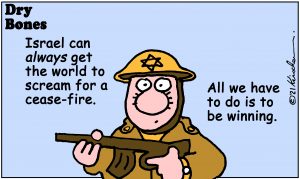 In recent weeks, every pro-Israel Jew and gentile worldwide has been challenged to justify Israel’s defensive war against Hamas in Gaza and Israel’s response to radical Islamic insurrection in Jerusalem.

Knowing how to counter the swell of anti-Israel global opinion (and indeed of attendant antisemitic activity everywhere) first requires an understanding of the challenge. There are several insidious narratives at play that undermine Israel.

The first is the “psychological asymmetry” employed by Hamas as a strategic weapon against Israel. The Palestinians exploit civilians to meet strategic goals, by placing them in danger or condemning them to unending refugee life. The ensuing misery gnaws away at the conscience of well-meaning observers around the world, and they find it hard to justify the “imbalance” in suffering between Palestinians and Israel.

To this can be added the soft bigotry of low expectations by the West of the Palestinians, which excuses Yihye Sinwar and Mahmoud Abbas of any responsibility for their people’s predicament. Layer onto this the bigotry of impossible standards expected of Israel, such as the demand that Israel fight jihadism with one-and-one-half hands tied behind its back.

Israel’s “over-dog” position and its frequent recourse to military action to defend itself is then magnified and manipulated by malign actors to skewer the Jewish state.

Then there is plain old Western naivete and do-goodism, which makes people reluctant to accept the fact that much of the Palestinian national movement has not abandoned its goal of annihilating Israel, and of replacing it with a Palestinian state “from the river to the sea” or with an Islamic Caliphate.

Then there is the radical progressivism which is increasingly dominant in Western political discourse. This makes people uncomfortable with the use of force by nation states in almost all cases, and susceptible to the false and facetious arguments of the “woke” world, for whom Jews and Israelis are “white” and Zionism is a movement of “white supremacy” while Arabs are victimized “people of color.” The distortions of this specious worldview do nothing for the sake of true understanding or peace in the Mideast.

Then there is a growing proclivity to take refuge in a false, manufactured dichotomy between “good old Judaism” and “bad new Zionism.”

In this view, ancient Jewish faith is something to be admired and commemorated, but modern-day Jewish nationalism as expressed in the powerful State of Israel is a sin.

Without realizing or admitting it, people who think like this are deeply antisemitic in effect. The Jew they (claim to) like and (very belatedly) admire is a weak, cerebral Jew; a Diaspora Jew whose Talmudic literature is all-of-a-sudden filled with wisdom, and whose art and poetry is unexpectedly so very 21st century cultural. The Jew one can meet in a museum display case.

But then there is the Jew they love to hate; the mighty and brawny Zionist Jew that wields the most formidable army in the Middle East and whose economy is just too damn flourishing. The Jew who is just too robust, potent, and proud. The nationalist Jew reclaiming his/her ancient homeland – who needs to be cut down to size.

CLEARLY, SOME NEW approaches in “hasbara” are called for.

This begins with recapturing a sense of outrage about anti-Zionist and anti-Jewish sentiment. After 2,000 years of demonization and persecution, Jews and Zionists in the 21st century no longer have bear body blows on a regular basis. We are no longer powerless. It is time to re-engage in the fight for Israel with passion and conviction, not apologetics or apprehension.

Second, Israel and its fans need not claim victimhood to win the argument. In any case, this does not wash. The recounting of Arab atrocities, no matter how egregious, is a hard sell because Israel is not seen as the underdog. Alas, people out there don’t care how many dunams of fine Israeli agriculture have been burned by Palestinian incendiary kites, how many Israeli women and children have been murdered by Hamas suicide bombers, or how many missiles Iran is giving Hamas to fire into Israel; especially when compared to the destruction wrought by the IDF in Gaza.

Instead, advocates for Israel ought to own-up to Israel’s strength. Admit to it and articulate how that strength is rightfully and wisely being used to fight Iran and Islamic jihadism – a challenge that the West faces too. After all, Israel is fighting the people that celebrated Bin Laden’s attacks on New York, Washington, Paris and elsewhere.

Remember David Ben-Gurion’s famous adage about the messianic era when the lion will lie down with the lamb, as per Isaiah? “That will be great,” said Ben-Gurion, “as long as Israel is the lion.”

So never apologize for Israel’s use of “disproportionate” force. Instead, articulate the reasons why Israel must be the “lion” and use overwhelming force to deter enemies and defend its homeland, and do not be shy about this. Agonize a bit over the need to be a ferocious military power, if you must, but never ask for forgiveness. When fighting against the genocidal Hamas and other enemies of Western civilization, Israel need not pull its punches just to win a nice guy award.

Third, history matters. Israel’s War of Independence and the Six Day War were not instances of Israeli aggression, but defensive wars. Settlements are not colonialist outposts, but expressions of the Jewish right of return to ancestral lands. Israel placed three full-scale peace proposals on the table over the past 15 years involving Palestinian independence and almost-complete West Bank dominion, but Palestinians rejected all offers and prefer to fight on.

This history needs to be restated because it is not widely known, and it goes to the core of Israel’s case.

Fourth, always emphasize that Israel seeks conflict resolution, not jihad. That Israel desires compromise, not annihilation of the enemy. That Israel wishes to live at peace with its neighbors, unlike the jihadists who wish to conquer Arabic and Islamic nations from Tunisia to Indonesia and European nations beyond, too. If the Emiratis and Bahrainis can understand this, so should Western liberals.

Fifth, it is not enough to explain Israel’s security dilemmas or revisit Israel’s diplomatic generosity towards the Palestinians. What is needed is a much more basic restatement of Israel’s cause and purpose: Israel as a grand historic reunion of people and land; as the Jewish People’s contribution to science, technology, arts and culture in the modern world; and Israel as a reliable anchor for democracy in a dangerous part of the world. Israel wins when you speak about justice and the Jewish nation.

I have found that forthright talk has salutary impact. Without being nasty or unfeeling regarding Israel’s adversaries, one can convey a deep sense of sincerity by clarifying Israeli red lines and articulating core Zionist commitments. People are forced to respect that, even if they may not impute to Israel spectacular charity. Better shock-and-awe than shrink-and-whimper.

Grudgingly, even liberals can come to see that Israel has a point; a perspective that might be tough and gruff but also might be reasonable under the circumstances.