The soft bigotry of low expectations of the Palestinians, and the hard bigotry of impossible demands on Israel. 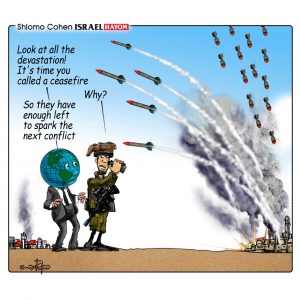 In a piece of punditry penned in 2014 but prophetically applicable to this week, the late, great columnist Charles Krauthammer wrote:

“To deliberately wage war so that your own people can be telegenically killed is indeed moral and tactical insanity. But it rests on a very rational premise: Given the Orwellian state of the world’s treatment of Israel, fueled by a mix of classic anti-Semitism, near-total historical ignorance, and reflexive sympathy for the ostensible Third World underdog – eruptions featuring Palestinian casualties ultimately undermine support for Israel’s legitimacy and right to self-defense.”

“In a world of such Kafkaesque ethical inversions, the depravity of Hamas begins to make sense. The whole point is to draw Israeli counter-fire; to produce dead Palestinians for international television.”

Krauthammer’s wisdom puts a mirror up against the painful criticism of Israel this week from Western leaders who should know better; and worse still, from self-styled “Jewish leaders” who first instinct is to savage Israel and save their own delicate souls.

It is maddening to see these people succumb with equanimity to Hamas’ genocidal agenda and obviously criminal conduct. By acquiescing in Hamas’ exploitation of its own people’s blood in service of Palestinian rejectionism, they distance the day that peace might be possible.

It is frustrating that democratic leaders profess to be concerned for Palestinian rights yet ignore Hamas’ murderous intentions against Israel. They disregard Hamas’ anti-Semitic discourse and its record of Islamist oppression and human rights abuse. They overlook its total backing by Iran. They take little heed of its path of kidnappings, rockets, border-breaching battles, and terror attack tunnels – with paid Palestinians as calculated cannon fodder.

They also seem to discount the Hamas-instigated attacks on Israeli Jews in Jerusalem and throughout Israel, including lynching, rioting, terrorizing women and children, and burning synagogues.

It is exasperating that otherwise good people pretend that these assaults on Israel’s sovereignty and security have anything to do with legitimate demands for humanitarian aid, or with a dispute over 10 homes in Sheikh Jarrah in Jerusalem, or with a two-state solution. Nonsense!

Hamas has repeatedly blown up the civilian and humanitarian supply infrastructures that Israel has facilitated for Gaza, and spent hundreds of millions of dollars in aid on military infrastructures instead. Israel unilaterally withdrew from Gaza 16 years ago, and still Hamas has since launched five wars against Israel.

How is it that foreign ministers and foreign correspondents fail to note that Hamas rejected US, UN, EU, and Russian offers of billions of dollars of aid to the people of Gaza in 2006 and 2014 if only Hamas were to demilitarize, end terrorism against Israel, and recognize Israel through acceptance of previous Palestinian agreements with Israel?

How is it that they fail to credit Israel with trying to mollify Hamas by facilitating hundreds of millions of dollars of Qatari cash for Hamas in Gaza over the past four years? (Alas, this seems to have been a failed strategy).

Instead, they complain that Israel is restricting supply convoys into Gaza during the current fighting and worry aloud that Hamas will not get the same kid gloves treatment after the fighting ends (including the provision of cement and other building materials, which have been poured in the military “metro” underground complex, instead of civilian reconstruction).

How is it that they barely acknowledge that Hamas has fired over 4,000 rockets (four thousand!) into Israeli cities over the past ten days, and only Israel’s rigorous civil defense and extensive and expensive anti-missile defense systems have prevented very heavy loss of life?

Instead, they call the Israeli-Palestinian death toll “disproportionate,” suggesting that not enough Israelis have been killed to justify Israel’s military counterstrikes on Hamas. How many Israelis must die for the sake of immoral symmetry and ersatz Western scruples?

How is it that they ignore the fact that at least 600 Hamas rockets fired from Gaza have fallen inside Gaza, and likely are responsible for many Palestinian civilian deaths? How do they discount the fact that many of the Palestinian dead are clearly identified Hamas and Islamic Jihad military personnel – by admission of the terrorists themselves?

It also is galling that Western do-gooders seem to view Palestinian “Days of Rage,” “Nakba Day” riots, and missile barrage eruptions as expected behavior. As if the Palestinians can’t help themselves from throwing a tantrum. As if responsible and reasonable behavior – such as negotiation, democratic and peaceful discourse, and normative state-building – cannot be demanded of the Palestinians.

This is the soft bigotry of low expectations of the Palestinians, which is the counterpart of hard bigotry of impossible demands on Israel.

I sense that this stems from reluctance to internalize the fact that, despite Israel’s Oslo Accord concessions and multiple peace offers ever since, much of the Palestinian national movement has not changed its goal of annihilating Israel and replacing it with a Palestinian state “from the river to the sea” or an Islamic Caliphate.

It is infuriating that “progressive” public figures have expropriated the Palestinian-Israeli conflict for their own “woke” battles. In their attempts to turn everything into “identity politics,” Jews and Israelis have been bizarrely cast as “white” and Zionism as a movement of “white supremacy” or “apartheid,” while Arabs robotically are cast as victimized “people of color.”

As Einat Wilf (writing in the new online journal, Sapir) has shown, the woke are projecting their domestic animosities and dictatorial thought patterns onto our battles with the purpose of aggrandizing themselves, and by the wayside demonizing Israel. The distortions of reality that emerge from this worldview do nothing for the sake of true understanding or peace in the Mideast.

One result of this perfidious approach to Arab-Israeli affairs is a frightening upsurge in hard-core antisemitic expression and activity all over the Western world. Demonstrators are yelling not just “Free Palestine,” but “Screw the Jews and rape their daughters.” After all, according to woke dogma, supporters of Israel are ipso facto “white supremacists,” and such people need to be “cancelled” or worse.

Then there is a new narrative of delegitimization, advanced by The New York Times and others, whereby Israeli Jews who live in mixed Jewish-Arab cities like Lod or Jaffa are “settlers,” a term heretofore applied only to those “dangerous colonizers” of Judea and Samaria. How dare Zionists settle so provocatively in pre-1967 Israel, within the Green Line!

Most of all, it is so sad that Israel is once again being placed in the position where it must cause suffering in self-defense; where it must destroy arms factories and terror attack tunnels built by Hamas, even though they are (purposefully, of course) situated in civilian areas.

PrevPreviousThe imperative of winning
NextThe lamb and the lionNext