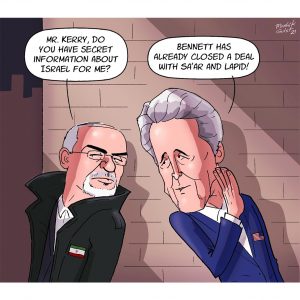 We were hit this week with revelations that former US Secretary of State John Kerry shared intelligence about Israel’s anti-Iran covert operations with Iranian Foreign Minister Javad Zarif.

According to audiotapes of an oral history project conducted in Iran last year that were obtained by the UK-based Iran International news channel and then published by The New York Times, Zarif says that Kerry informed him about “at least” 200 Israeli strikes against Iranian targets in Syria. “You did not know?” the interviewer asks twice. To which Zarif responded, “No, no,” on both occasions.

Unfortunately, this report about Kerry divulging security secrets to Zarif is downright believable. Whether or not Zarif is telling the truth, and whether this happened before Israel’s strikes were public knowledge (which would make Kerry’s actions treasonous) or only afterwards – the story stinks. It is plausible, alas, because deviousness characterizes Kerry and he has been willing to curry favor with adversaries to prove his own mighty wisdom, while punishing Israel.

When he first became Secretary of State, the view from Jerusalem was that John Kerry was a naïve nice guy. His ardent enthusiasm for basically impossible peace talks between Israel and the corrupt, extremist Palestinian Authority was viewed as stop-gap diplomacy or a fool’s errand.

But in a 2013 television interview to Israeli and Palestinian television reporters a different Kerry appeared: nasty, threatening, one-sided, blind to the malfeasance and unreliability of Palestinian leaders, and dangerously oblique to the explosive situation he himself was creating.

He warned about the “coming isolation” of Israel and of a third intifada unless Israel quickly allowed the emergence of a “whole Palestine” and ended its “perpetual military occupation” of Judea and Samaria. This was not just unfriendly pressure. Kerry basically laid out the Obama administration’s acceptance of the campaign to delegitimize and isolate Israel. He was trading treacherously in ugly self-fulfilling prophecy, giving Palestinians an excuse for violence and for renewal of their lawfare against Israel in international forums.

Instead, Kerry chose to launch a full-bore attack on Netanyahu, and on all Israelis who (in Kerry’s words) pigheadedly “feel safe today” and “feel they’re doing pretty well economically.” He laid out the consequences for Israel of disobeying America (– no safety and no prosperity); but laid out no similar consequences for the Palestinians if they remain intransigent.

In fact, Kerry and his boss then-US President Barack Obama were responsible for shaping the broader inflammatory context that spawned the 2014 wave of Palestinian terror against Israel. Essentially, they encouraged Palestinian leader Mahmoud Abbas in the latter’s campaign of brazen lies, violent confrontation, and diplomatic assault against Israel.

Kerry callously remarked that he “wasn’t going to get into assigning blame for the cycle of violence” in the region, and that “both sides” were posing “challenges” to the two-state solution. He then cravenly suggested that there was justification for Palestinian attacks, explaining that “You have this violence because there’s a frustration that is growing among Palestinians who don’t see any diplomatic movement.”

Kerry had no critical comment when Abbas suggested that “filthy Israeli feet” were “desecrating” the mosques on the Temple Mount or when Abbas denied the Temples of ancient Israel as a historical fact.

In 2014, Kerry returned to the “oy-vey-Israel-is-going-to-be-boycotted” theme, once again feigning concern for Israel’s Jewish and democratic character, and then threatening its economic prosperity.

“Absolutely to a certainty, I promise you 100 percent, today’s status quo cannot be maintained. It is not sustainable. It is illusionary,” Kerry warned apocalyptically. “You see for Israel there is an increasing delegitimization campaign that has been building up. People are very sensitive to it, there is talk of boycott and other kinds of things.”

By contrast, Kerry never once publicly warned Palestinian leadership that this was their last chance for a Palestinian state. He never warned Abbas that the PA would forfeit its international largess and “economic prosperity” if he (Abbas) did not “demonstrate leadership” by accepting Kerry’s proposals.

And in the end, Kerry blamed Netanyahu and Israeli settlements for scuttling his heroic efforts at peacemaking. Right down to his dying hours in office, he screamed bloody murder about Judea and Samaria, insolently referencing a non-existent “massive and illegal” Israeli construction surge in the biblical cradle of Jewish civilization.

To cap it all off, Kerry arrogantly added that “there will be no advanced and separate peace with the Arab world without the Palestinian process and Palestinian peace. Everybody needs to understand that. That is the hard reality.”

“I’ve heard several prominent politicians in Israel sometimes saying, well, the Arab world is in a different place now, we just have to reach out to them, and we can work some things with the Arab world, and we’ll deal (later) with the Palestinians. No, no, no and no,” concluded Kerry with his usual pompous self-assuredness.

When he was (thankfully!) out of office, Kerry warned that the Middle East would “explode” if the Trump administration moved the US embassy to Jerusalem. Then he warned that Trump’s assassination of IRGC leader Qassem Soleimani would cause “an absolute explosion throughout the region,” too.

Kerry was wrong on all counts: that rejecting his peace proposals would lead to Israel’s international isolation; that Abbas was ready for peace while Netanyahu wasn’t; that no Arab country would make peace with Israel before establishment of a Palestinian state; that the Mideast would “explode” if a US embassy was opened in Jerusalem; and that “outright war” would result from the strike on terrorist mastermind Soleimani.

But this has not chilled Kerry’s ridiculous self-regard as a moral oracle and political prophet.

KERRY’S BADLY BROKEN diplomatic compass and his pretentiousness also played a role in selling Obama’s nuclear deal with Iran (the JCPOA). “There is no better deal with Iran,” Kerry swore in 2015, after being bamboozled by his negotiating counterpart, Javad Zarif. “The deal has eliminated the threat of an Iran with a nuclear weapon,” he ostentatiously declared. Like Obama, he then libelously tarred opponents of the deal, such as Netanyahu, as “warmongers.”

Later, Kerry went on an international campaign to drum-up big business for the mullahs of Tehran. He crisscrossed America and Europe in his official government jet to persuade the CEOs of Fortune 500 companies to invest in Iran; to make sure that Iran got its “peace” dividends, aside from the billion of dollars in Iranian assets that Obama released to the coffers of the regime.

Once out of office, Kerry was caught colluding with Zarif again. In a series of meetings in 2018, Kerry advised Zarif to wait-out Trump and hope for more pliant Democrats to be elected in 2020.

And then arrives the new story, suggesting that years ago Kerry tipped-off the Iranians about covert Israeli operations. Again, this may not be true. But one must ask: What other secrets, American or Israeli, might Kerry have spilled to the Iranians?

Worse still, this week’s revelation fits a pattern of Obama administration callousness, and now Biden administration coldness, towards Israel. It comes in the context of growing tensions between Washington and Jerusalem over (supposedly Israeli) sabotage of the Iranian nuclear program and strikes on IRGC targets in Syria and the Red Sea; strikes that seem to have been ‘outed’ by the administration.

One must ask: How much further will Biden appointees go to undercut Israel’s diplomatic and military efforts against Iran? Out of pique with Israel, might the Biden administration (in which John Kerry serves as climate envoy with cabinet rank, and Kerry’s proteges oversee Iran policy) ‘punish’ Israel for its resolute stance against Tehran by withholding diplomatic support for Israel on other fronts? Might the administration apply linkage between Iran policy and, for example, US support for Israel at the ICC and other international forums (where Israel is under attack)?