Can J Street stoop any lower?

The organization has become an anti-Israel mutant, lobbying to restrict US military aid to Israel and moving towards a “confederated state” to replace Israel. 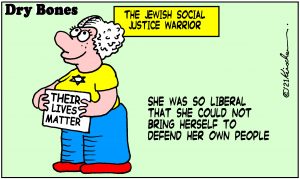 First in sorrow, then in anger, for years I have tracked J Street’s malignant metamorphosis from a “pro-Israel and pro-peace” organization into an anti-Israel mutant.

At its founding a dozen years ago, “pro-Israel and pro-peace” was taken to mean partnering with the mainstream Israeli political left to build support in Washington for a two-state solution between Israel and the Palestinians. Fair enough.

But since then, J Street has spent its time and money besmirching Israel; lobbying for Mahmoud Abbas; smearing AIPAC and Birthright and other truly pro-Israel organizations; pumping for President Obama’s dangerous deal with Iran (and supporting its renewal); and backing political candidates for whom BDS is a badge of honor and antisemitism is part of their repertoire.

To this shameful list can now be added: Lobbying to restrict US military aid to Israel, and possibly moving towards advocacy of a “confederated state” to replace Israel all-together.

The organization’s descent into anti-Israel iniquity started when it supported the evil Goldstone Report (the UN’s hatchet job on Israel following the 2009 war with Hamas), advocated open diplomatic talks with Hamas but not military action against it, and then endorsed the Palestinian Authority’s drive for unilateral recognition of statehood at the UN.

J Street also began wrapping its confrontation with Israel in pious spiritual claptrap. Its leaders earnestly broadcast their “profound Jewish and spiritual identities,” to besmirch the mainstream Jewish community and engender a distancing in US-Israel relations.

Peter Beinart launched his notorious book, The Crisis of Zionism, at the 2012 J Street conference too, promoting a “progressive vision of American interests and liberal Jewish values.” We all know where Beinart ended up: Openly calling for the dissolution of Israel. (Judging from this year’s J Street conference, the organization may not be far behind Beinart. Read on below).

In 2012, J Street became a shill for President Obama’s Iran policies. It started a campaign to “Stand up to those beating the drums of war against Iran,” meaning those nefarious, radical Israelis led by Prime Minister Netanyahu, and his knee-jerk, incautious, ra-ra cabal of American Jewish supporters – like the 13,000 American Jews who attended that year’s AIPAC conference and lobbied for restrictions that would permanently end Iran’s nuclear bomb program.

“It is not as if we’re seeing Iran develop a specific plan for the elimination of the Jewish people,” soothed J Street president and founder Jeremy Ben-Ami. Consequently, his pro-peace angels marched on Washington “to stand up to those who talk loosely about war with Iran” and to support Obama’s spineless policy regarding Iran.

In 2017, J Street launched its “StopDemolitionsBuildPeace” campaign, designed to “challenge our communities to wake up to the omission and erasure of Palestinian perspectives and narratives, which create the environment that make it easy to ignore demolitions, settlement expansion and occupation.”

In 2018, younger J Street-yites (sounds like “Trotskyites”), newly organized under the rubric J Street U, hosted teach-ins and sleep-ins on university campuses and marched on Israeli embassies to protest Israeli policy in Judea and Samaria. (Of course, J Street calls Judea and Samaria by its UN moniker, the OPT – “Occupied Palestinian Territories”).

Birthright – one of the American Jewish community’s most successful initiatives, a lifeline in the difficult struggle to keep young American Jews Jewish and to give them some Zionist foundations – was for J Street a source of “omission and erasure.” Its trips to Israel, wailed J Street, “omit Palestinian narratives in their programming and erase Palestinians and the occupation from our collective consciousness,” and “perpetuate the attitudes and politics that help make demolitions and occupation possible.” Such trips “might lead our communities to feel no compulsion to speak out on behalf of Palestinian rights.”

In 2019, J Street ramped-up its anti-Israel campaigning with a new initiative to condition US military aid to Israel on an end to Israeli home building in Judea and Samaria, and more generally on “an end to the occupation.”

“As Israel receives that $3.8 billion in US foreign aid, what is it being used for?!” roared Ben-Ami at the conference opening. “For too long, American taxpayers and lawmakers have been asked to provide military assistance to Israel without questioning whether the material acquired with that aid was being used as a blank check to further Israeli policies and actions that the US opposes, including the entrenchment of the occupation.”

Sure enough, throughout the 2020 election year, J Street activists ambushed Democratic presidential and congressional candidates at campaign events, posing the new J Street litmus test, that candidates outright condemn Israel’s “occupation” of the West Bank and declare they would consider withholding aid from Israel to get it to change its policies.

This was a shocking, contemptible new low for J Street: actively campaigning to cut US military aid to Israel. Even the most-unfriendly-to-Israel and pro-Palestinian president of the US, Barack Obama, did not seek to harm Israel’s security by cutting military aid to Israel. (In fact, he signed a ten-year military aid deal with Israel). Moreover, the J Street initiative rests on baseless libel. The State and Defense departments always have ensured that American security assistance to Israel is used only for legitimate self-defense and internal security.

Alas, J Street started getting results. Several Democratic presidential candidates cozied-up to J Street’s foul formula, including Bernie Sanders, Elizabeth Warren, and Pete Buttigieg. They said they were open to cutting or conditioning US military aid to Israel as a way of forcing Israel to bend to their will.

At this week’s 2021 virtual J Street national conference, J Street announced its support for a new House bill (introduced by Rep. Betty McCollum and some 20 other Democrats including the “Squad” – Reps. Alexandria Ocasio-Cortez, Rashida Tlaib, Ayanna Pressley and Ilhan Omar) specifying various actions Israel may not finance with US taxpayer funding, while also calling for additional oversight of how aid is distributed.

J Street’s endorsement and inclusion of the bill in its advocacy work gives the legislation backing that McCollum’s previous attacks on Israel lacked. Haaretz celebrated this moment, calling it a “victory lap” for J Street, and “a notable moment for drawing criticism of Israeli policy out of the fringes and into mainstream conversation.”

A sign of where J Street may yet stoop in its radical opposition to Israel was the conference session on “creative paths toward a two-state solution” which focused on Israeli-Palestinian “confederation.” You can argue that “confederation” is just a twist on the two-state concept. But I view this as an insidious slide away from support for the sovereign Jewish state of Israel towards the nihilistic one-state “solution” now advocated by Beinart and other post-Zionist propagandists.

The most inflammatory talk at the conference was given by Senator Elizabeth Warren who reiterated her call to condition US aid to Israel, and then implored Israel’s opposition parties to unite and oust Prime Minister Netanyahu so that the US could facilitate the creation of a Palestinian state. (Talk about blatant foreign interference in Israeli politics!)

Warren then repeated the blood libel about supposed Israeli “apartheid” in denying or blocking corona vaccinations to Palestinians. “Jewish settlers in the West Bank are receiving vaccinations, while few Palestinians have any access to life-saving shots,” she fumed.

No J Street leaders reproached Warren for such defamation of Israel. The slander slid smoothly down J Street throats and spread widely across J Street frequencies. It probably would have been met with roaring applause had J Street-yites been physically present in the room with Warren.