The hard Left in the US and Israel is revving-up its engines in support of a soft nuclear deal with Iran, mainly by attacking Netanyahu. 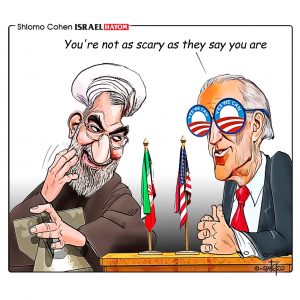 It is not too early to discern the “echo chamber” messaging in support of a repeat nuclear deal with Iran. This messaging must be debunked now and emphatically so, before it grows predominant – in Washington and Tel Aviv.

Indeed, the hard ideological Left in the US and Israel is revving-up its engines in support of a soft deal with Iran, mainly by attacking Netanyahu. Their emerging arguments are these: 1. There is no military way to block Iran from building a nuclear bomb. 2. Nevertheless, Israel’s prime minister is sabotaging President Biden’s diplomatic negotiations with Iran to force the US into war with Iran. 3. He is doing this partially/mainly for his own narrow political purposes, to manufacture a security crisis that serves him at the polls.

Each of these arguments is wrong, and not just wrong but perversely so; meaning that the people making these arguments must be considered propagandists who have an axe to grind in this debate because they purposefully, knowingly are making outrageous and unsubstantiated statements.

After last week’s American “outing” of a supposedly Israeli commando strike on an Islamic Revolutionary Guard Corps intelligence ship in the Red Sea, there was an avalanche of “expert” punditry in the US accusing Israel of causing trouble while nuclear peace talks with Iran were underway. The crescendo of criticism grew after somebody blew up the Natanz nuclear facility, and Iran responded by announcing its intention to begin enriching uranium to 60% purity – which is very close to bomb-grade material.

The junior Democratic Senator from Connecticut, Chris Murphy, immediately tweeted “It should go without saying that there is no viable military path to divorcing Iran from a nuclear weapon. Only a diplomatic path. And now, the diplomatic road is more difficult.”

Trita Parsi, who is perhaps Iran’s top Washington lobbyist, tweeted that “Given Israel’s aggression against Iran, the next Iranian President – particularly a conservative one – will feel compelled to strike back against Israel to dispel any notion in the West that Iran’s restraint has been due to desperation or lack of options. Iran’s retaliation will then either spark a larger conflict or at a minimum further undermine prospects for talks, blocking the outcome Israel fears the most: A US-Iran deal that reduces their tensions and paves the way for the US to shift its focus away from the Mideast. As Bibi’s supporters in DC have made clear, Israel is clearly willing to boldly undermine Biden if he seeks to advance the interest of the United States. Biden’s failure to exact a cost on Bibi for undermining him is precisely why Bibi will continue to do it.”

Parsi and other shills for Iran went on to further argue that none of the assassinations of Iranian nuclear scientists imputed to Israel, and none of the cyberattacks (like Stuxnet) and sabotage strikes attributed to Israel and the US, have succeeded in changing the trajectory of the Iranian nuclear program or altering its timeline in a significant way.

There are many fallacies embedded in these statements, the core of which is the fake trinity that Iran cannot be stopped militarily; that Iran can be “bought” with cash concessions (the ending of sanctions) to the point that it will forever foreswear nuclear weapons development; and that Iranian aggression (including its stated desire to destroy Israel and its hegemonic advances across the Middle East) aren’t the core problem, but rather that “Israeli aggression” is.

The additional speciousness in Murphy and Parsi’s arguments is as follows:

1. If you oppose military solutions to Iran’s illegal nuclear program, you should support clandestine solutions that leave no casualties. If you oppose even that (like the sabotage of Natanz), then basically you support Iran’s nuclear program. As Haviv Gur tweeted this week, “Just be honest about it. Tell us why Khamenei should have a nuke program.”

2. It is simply false that sabotage and sanctions have not effectively prevented Iran from attaining a nuclear bomb. As Maj. Gen. (res.) Giora Eiland this week told Israel Radio, in 2001 IDF Military Intelligence thought Iran would have nuclear weapons within four years. Twenty years later, it still doesn’t – and not because the Iranians haven’t tried. Moreover, the Trump administration’s “maximum pressure” policy essentially has wiped out Iran’s foreign exchange reserves, which plunged to $4 billion in 2020 from $123 billion in 2018, according to the International Monetary Fund. This this has forced Iran to massively cut back financial support of Hezbollah and other Shiite militias across the region, and probably slow its nuclear program too, according to IDF Military Intelligence.

3. Therefore, it makes no sense to move from a policy of maximum pressure on Iran to maximum concessions, and then believe the US will have leverage to negotiate a “longer, stronger, broader” deal that covers Iran’s ballistic missiles, overseas terrorism, human rights violations, etc. Tehran will have no incentive to relent if the Biden administration lifts all primary and secondary sanctions, all terror designations, and so on.

As Mark Dubowitz of the Foundation for the Defense of Democracies wrote this week, “Iran will simply take the patient pathway to nuclear weapons, while immunizing its economy against the use of sanctions in the future and building up its regional dominance. Therefore, containment of Iran (through all forms of pressure) is the right policy. Billions of dollars should not be transferred to Iran for a short, weak, and narrow nuclear deal. Mass slaughter, nuclear blackmail, and terrorism shouldn’t be rewarded.”

ON TOP OF THIS, the Israeli Left is now chiming in with the insinuation that Netanyahu is exacerbating the long-simmering conflict with Iran, specifically now, to bring about political change or at the very least to prevent his rivals from forming a government.

If a sharp military crisis doesn’t (again) bring Benny Gantz into government with Netanyahu, perhaps it will be enough to persuade Bezalel Smotrich’s party to join a Netanyahu-led government that relies on support from the Islamists of the United Arab List. Friction with the American government might also appeal to Smotrich’s party, Haaretz’s defense analyst has suggested.

In a similar vein, Amos Yadlin, a former chief of IDF Military Intelligence who was the Labor Party’s candidate for defense minister two elections ago, has accused Netanyahu of approving attacks on Iran “without the necessary legal authority.”

“Sensitive operations, with diplomatic and security significance that include the potential for escalation, require government approval,” Yadlin wrote in a series of tweets. “The cabinet can authorize the [security] cabinet to decide, and the cabinet [can authorize] the prime minister and defense minister. All these processes did not happen.”

And in case his readers were not impressed by such legal nitpicking, Yadlin added the calumny that “It is doubtful whether we are not witnessing a political timing that influences the initiation of a security crisis with the goal of making it easier for Netanyahu to form another government under his leadership.”

Such smears are contemptible. Every security and intelligence official I know who has worked closely with Netanyahu, including some who have become fierce public critics of him today, avows that Netanyahu takes his responsibility to protect Israel with the utmost seriousness. Netanyahu believes with every bone in his body that cutting Iran down to size is his ultimate strategic task. He does not play politics on this issue, not versus the president of the United States nor the Israeli voting public.

The spurious allegations, fibs, slanders, and canards that already are being applied to the campaign to sell another sell-out accord with Iran repulse me.

PrevPreviousTemporal yardsticks of measurement do not apply to Israel
NextCan J Street stoop any lower?Next