Wine: A drink for all occasions (Purim) 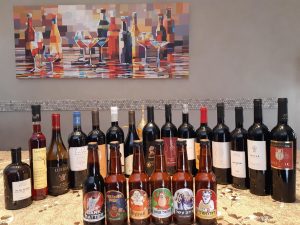 Israel’s premier wine critic, Daniel Rogov, used to say that when you open a bottle of wine, you open 5,000 years of culture and history. That is certainly true in this country, where drinking local wines can be a deep profession of faith; a celebration of the magnificent fruit that the Lord has re-bequeathed the indigenous people of the Land of Israel after 2,000 years of desolation and Jewish dispersion.

(Rogov, the hard-working food and wine critic for Haaretz, almost singlehandedly drove Israeli wines and kosher wines in general to international attention. No-one has come close to replacing Rogov as the grand guru of Israeli wine since he died ten years ago. Let this article serve as tribute to him.)

What follows is a guide to superb Israeli wines for Purim and Pesach, each of which I have been privileged to taste recently. Any of the bottles will do a fine job of erasing the memory of Israel’s enemies on Purim (a holiday that combines several of my passions: politics, history, faith, and wine); and celebrating Jewish freedom on Pesach.

Castel. The ‘C’ Blanc du Castel 2019 (an oaked Chardonnay) is velvety masterpiece, round and filling. Winemaker Eli Ben-Zaken calls it the “most red” of white wines, which pairs well with chicken and fish, as well as dairy foods. “If I had to take only one wine with me to a desert island, this would be it,” he says.

Drimia. Ela’d Movshovitz’s winery based in Susia draws on vineyards planted 900 meters above sea level in the Yatir forest. His flagship wine, Drimia Sfar (Cabernet Sauvignon, Petit Verdot), is delicious, especially if you can find the 2014 vintage.

Flam. Golan Flam’s elegant hand in winemaking shows beautifully in his Cabernet Sauvignon Reserve 2018, crafted from Galilee grapes. For Passover seder, we drank the Flam Noble 2012, the winery’s world-class flagship wine, to mark the birth of a granddaughter that very day.

Hayotzer. Philippe Lichtenstein’s Hayotzer Lyrica GSM 2016 (Grenache, Syrah, Mourvedre) brings the nose and palate of Provence to the hills of Jerusalem. The Lyrica Syrah is a powerful yet caressing wine.

Lueria. Gidi Sayada’s winery in Safsufa is a favorite of mine. The alcohol levels and oak influence are kept in check, allowing the fruit to dominate. Standout wines are the Lueria Rosso (Sangiovese and Barbera), Shiraz (deep, peppery, and pairs perfectly with Shabbat cholent). We drank the flagship Lueria Grand Vital (a chewy, round, and elegant blend of Cabernet, Merlot and Cab Franc) at my grandson’s brit milah in July.

Netofa. Pierre Miodownick’s renowned wines are made from varietals native to Spain, Portugal, and the Rhone Valley in southern France, which he started planting in the southern Galilee in 2006. His just-released Tel Qasser Moursyr 2018 is a medium-body Mourvedre (with a small bit of Syrah). This refined wine is exhilarating; easy drinking that gets better by the hour.

Oryah. I am a boundless fan of Ya’acov Oryah’s artisanal wines and the romantic names he has given each of them. I love his Eye of the Storm 2017 (a GSM blend), Spirals of Smoke 2016 (GSM+), Iberian Dreams (Rioja-style blend of Tempranillo, Grenache, and Carignan), and SOB 2017 (the Special Oryah Blend of five varietals). Just released is his Old Musketeer 2008, a dessert wine barreled for 12 years (made from late harvested Muscat of Alexandria blended with some Chardonnay). An absolute treat.

Shiloh. Amichai Lourie’s winery won the most medals of any Israeli winery in the 2020 Decanter World Wine Awards, with two gold medals for its Secret Reserve Cabernet Sauvignon and its Mosaic Exclusive Edition (2017). The Shiloh Secret Reserve Shiraz 2017 is rich and spicy – another excellent wine to pair with Shabbat cholent.

Teperberg. The Essence Cabernet Sauvignon 2017 by Teperberg is a terrific example of quality Israeli winemaking, with grapes drawn from the Galilee and Samarian mountains. The winery’s youngest winemaker, American immigrant Dani Friedenberg, has now produced his own unique wines under the Teperberg label: a Grenache and a Ramato of Pinot Gris 2019. The Ramato is well structured, fresh, and light. Quite unique, and available only from the winery.

Yatir. We drank the Yatir Forest 2016, this winery’s famous top blend (Cabernet, Petit Verdot and Malbec) for the simchat habat of yet another new granddaughter on Succot. We drank the new Yatir Creek White 2016 (Viognier and Chenin Blanc) at an anniversary picnic just recently. It drinks beautifully alongside cheese and chocolate, and is currently my favorite white wine.

Mayacamas. Moving beyond Israel to California, it is thrilling to note that the authoritative Wine Spectator magazine listed Mayacamas Vineyards Cabernet Sauvignon Mount Veeder 2016 as No. 4 (!) on its list of the “Top 100 Most Exciting Wines of 2020,” scored at 96 points. This is an energetic Cabernet built on acidity and minerality alongside tannins and fruit, and it should age wonderfully for two decades. Kudos to Jay Schottenstein for making this historic Napa Valley winery kosher.

I recently directed a Tu BiShvat wine tasting program for World Mizrachi TV. Five of the winemakers and the wines mentioned above are featured in the sleek, fun, and educational video. Watch here. Purim Sameach!