A wholesale changeover in Washington’s foreign policy elites is underway; a substitution of mindsets that worries Israel. Here is a survey of recent deep-think journal articles that map the shift. 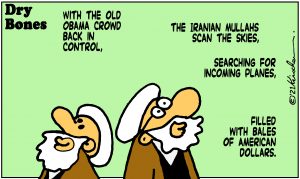 [4]The replacement of US President Trump with President Joe Biden is much more than a changing of the guard in the White House. It marks a wholesale changeover in Washington’s foreign policy elites, a substitution of mindsets. Recent deep-think journal articles map the shift.

A good place to start is the May 2020 article [5] in Foreign Affairs by Daniel Benaim and Jake Sullivan on “America’s Opportunity in the Middle East.” Sullivan was an early negotiator of the controversial 2015 nuclear deal with Iran (the JCPOA) and is now President Biden’s national security advisor.

Sullivan made it clear that the US ought to “immediately reestablish nuclear diplomacy with Iran and salvage what it can from the 2015 nuclear deal,” and only after that get into “regional negotiations” to tackle Iran’s hegemonic troublemaking and terrorism. “It is a recipe for failure to hold the opportunity to constrain Iran’s nuclear enrichment hostage to maximalist regional demands – as when US Secretary of State Mike Pompeo called for getting ‘every last Iranian boot’ out of Syria. There may be a way to thread the needle, through a phased approach that delivers nuclear progress up front and creates space to address regional challenges over time.”

This indeed is the approach that President Biden seems to be taking, even though it probably will free Iran of Western sanctions up front, and fritter-away whatever leverage Washington has on Iran for “addressing regional challenges over time.” For this reason, Israel passionately opposes this approach to dealing with Iran.

In a similar vein, Rob Malley signed-off on a January 2021 report [6] by the International Crisis Group (of which he was President and CEO) with 19 “conflict-prevention tips” for the Biden administration. Just before he became President Biden’s chief Iran envoy, Malley and his colleagues urged the US “to initiate a process of fully reversing Trump-era sanctions… and support Iran’s International Monetary Fund loan request as a sign of good-will – while Iran brings its nuclear program back into full compliance.”

“It may be tempting to link rejoining the JCPOA to other issues, but that could put the whole deal at jeopardy. The objective should be a clean re-entry. Other issues, such as regional de-escalation and Iran’s ballistic missile development, are critical, but best pursued subsequent to, not as a condition of, full restoration of the existing agreement.”

Again, this runs directly counter to Israel’s view of how to handle Iran and the JCPOA. To understand just how disastrous a “clean-return” to the JCPOA would be read Dr. Uzi Rubin’s recent piece [7] of JISS scholarship. He warns that if the US administration “bows to the Iranian nation” (as Ayatollah Khamenei has demanded) by rushing back into Obama’s nuclear deal with no substantial correction of its many weaknesses, the Ayatollahs will justifiably regard this as a historic victory. “Iranian prestige and standing in the region will be enhanced immensely, and Iranian coffers will overflow with income from oil exports and renewal of international trade. This Iranian victory also will discourage Arab states from further normalizing their relations with Israel.”

Martin Peretz reminds us in a pungent essay [8] in Tablet Magazine that the policies Ron Malley has promoted and facilitated over 20 years are consistently in the service of rapprochement with the Palestine Liberation Organization, Hamas, and Iran – which are held up by institutional progressives as the marquee victims of Western interventionism in the Middle East. He notes that Malley’s allies in Washington (like Peter Beinart, who no longer believes in Jewish statehood) venerate Malley for his “capacity to do something Beltway militarists find deeply threatening: See beyond America’s self-congratulatory self-conception and grasp how the US and its allies look to their victims.” Ugh.

Yossi Klein Halevi nevertheless seeks a path forward for Israel and its new Gulf allies in dealing with the new Democratic administration. In a paper [9] published for an Emirati think tank, he calls for an Israeli-Gulf state initiative “aligning with the moderate majority within the Democratic Party,” to present a strategically credible and united front on Iran.

“In place of the Obama administration’s dangerous illusion of an Iranian-imposed regional stability, a new force for regional stability has emerged – the Abraham Accord alliances. This gives Israel a strategic advantage it lacked in the first round of the struggle to prevent the Iran deal. A joint Arab-Israeli case against a return to the JCPOA in its previous form (or cosmetically modified) will carry substantial strategic and moral weight. This is an advantage that must be maximized.”

Writing [10] in Commentary Magazine Bret Stephens begs President Biden not to mess up the Abraham Accords. He reminds readers that Obama’s policies succeeded in infuriating or betraying nearly all of America’s traditional allies in the region while winning no new friends; whereas the logic contained in the Abraham Accords offers Biden one shot at success across a range of traditional Democratic foreign-policy objectives. These include reducing the scale of US Mideast commitments by growing Israel-Arab alliances and promoting regional integration; advancing normalization of Arab ties with Israel to fight Islamic radicalism and Palestinian rejectionism; and countering Iranian aggression.

He also warns Biden against “overworking” the Israeli-Palestinian issue. “The infatuation so many US policymakers have with Palestinian statehood has disserved American interests in myriad ways; as well as harming Israeli, Arab, and even Palestinian interests.”

Picking up on obsessions with “peace-processing” the Palestinian-Israeli conflict, Shany Mor and Michael Doran write in a pair of brilliant Mosaic Magazine essays [11] that America’s foreign policy establishment has, in the name of peace, only incentivized conflict in the Middle East.

The peace-processing “guild” (which Trump’s team upended) “remains wedded to a fuzzy-headed and unchanging conventional wisdom, characterized by epistemic closure, that has proven remarkably resistant to sober-minded reappraisals” (such as the Trump peace plan).

This guild sanctimoniously seeks to rescue a “morally fallen Israel” (a country compromised by its own hard-fought victories) by forcing a peace deal that will see Israelis in pain. Thus, Israeli withdrawals and “sacrifices” for peace are the only way to ritually purify Israel from its sins, and thereby expiate America of its responsibility for crimes against progressivism and against an “equitable” balance of power in the region. When speaking of Israel, “you need to furrow your brow like a parent who is more disappointed than angry, and assert that Israel’s policies will not achieve their goals but rather backfire on Israel.”

Mor calls this a “return to the dark days of daylight” (referring to Obama’s drive to open up “daylight,” or distance, between America and Israel). Doran calls this “saving Israel in spite of herself,” and he locates the source of this predilection in neo-theological Protestant missionary impulses that run deep among American elites.

How I wish that the new administration would harken to the wise words of Jim Jeffrey, a veteran American diplomat who served in seven administrations, most recently as Special Representative for Syria Engagement and Special Envoy to the Global Coalition to Defeat ISIS. Writing [12] in Foreign Affairs, Jeffrey argues that Biden does not need a new Middle East policy, because the Trump Administration, for all its peccadilloes, “got the region right.”

“Trump made it clear that he would work primarily through partners on the ground. Therefore, he supported Israeli and Turkish military actions against Iran and Russia in Syria and relied primarily on the Gulf states, Jordan, Iraq, and Israel to stand up to Tehran. The US would in turn complement these efforts militarily when necessary, selling weapons, targeting terrorists, or punishing Syrian President Bashar al-Assad’s use of chemical weapons. (While) the administration was generally cautious about using military power… when it did decide to act, US forces effectively targeted Assad, terrorist groups, Russian mercenaries, and Iranian-backed militias.”

“In exchange for carrying this extra burden, the Trump administration largely ignored the domestic behavior of important partners, including Egypt, Turkey, and even Saudi Arabia. The administration also made clear that it would openly back Israel when it came to Palestinian issues, overturning long-standing US and international policies on arms transfers, the Golan Heights, Jerusalem, and Western Sahara. Those policies produced the historic Abraham Accords between Israel and several Arab states.”