My third annual list of best books on Israeli and Jewish matters, ranging from diplomacy and history to Torah commentary. 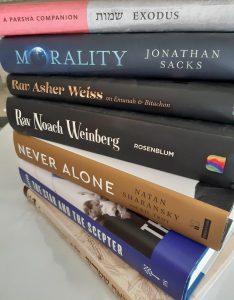 I enjoy sharing books with others, which was the genesis of this annual list of best books on Israeli and Jewish matters.

My third annual list with books from 2020 is below. It includes quite a few outstanding books of modern Torah commentary.

Morality: Restoring the Common Good in Divided Times, by Rabbi Lord Dr. Jonathan Sacks (Hodder & Stoughton). The passing of Rabbi Sacks in November at age 72 ends this great man’s magnificent publishing career, leaving his devoted acolytes bereft. Fortunately, Sacks managed to publish this important book earlier in the year, and it is well worth reading. It encapsulates one of his main teachings, that the rebuilding of faith communities is necessary for the health of the democratic, liberal world.

Judaism Straight Up: Why Real Religion Endures, by Prof. Moshe Koppel (Maggid). This fascinating book contrasts “traditional” religious life with the “woke” identity of today’s “progressives,” through interplay between two fictional characters, Shimen (an indomitable hassid) and Heidi (a cosmopolitan Princeton graduate), and their offspring. The author’s point is that cosmopolitan sensibilities are delightful, but do not relay any real identity to the next generation. A balance between freedom and loyalty, universalism and particularism, and creativity and commitment must exist for any religion or society to organically endure, especially for a minority people, the Jews.

The Coronavirus Pandemic: Historical, Medical, and Halachic Perspectives, by Rabbi Prof. Avraham Steinberg MD and Ari Ciment MD (Mosaica). Rabbi Dr. Steinberg is a genuine polymath, one of foremost medical ethicists in the world. Here he deals with dilemmas such as the triage of corona patients and rationing of ventilators. How far should doctors endanger themselves to treat patients? Can one inform authorities about a neighbor who is violating a social-­distancing rules? Co-author Dr. Ciment shares critical care front-line experiences about medical challenges of the current crisis.

Never Alone: Prison, Politics, and My People, by Natan Sharansky and Prof. Gil Troy (PublicAffairs). Can Sharansky inspire beyond his heroism in facing down the KGB? Well, the Israeli political tales in this new memoir indeed are gripping and inspiring, all meant to emphasize Natan’s undying belief in the power of Jewish community and global Jewish solidarity. And there are stories here about Jewish world politics that Natan never told before.

ISRESILIENCE: What Israelis Can Teach the World, by Michael Dickson and Dr. Naomi Baum (Gefen). What makes it possible for Israelis to compartmentalize pain and move forward with joy, grace, determination, and creativity? This delightful book answers the question through a dozen profiles of Israelis who do inspirational things despite adversity, proving that Israel indeed is a “plucky little country” with a generations-old Jewish spirit.

The Star and The Scepter: A Diplomatic History of Israel, by Dr. Emmanuel Navon (JPS). This is the first and only book I know on Israel’s foreign policy that provides a wide historical perspective going back to antiquity. Starting with the Hebrew Bible, the author argues that one cannot grasp Israel’s interactions with the world today without understanding how Judaism’s founding document has shaped the Jewish psyche, blending faith (the “star”) with pragmatism and hard power (the “scepter”).

From Trump to Biden: The Way Forward for U.S. National Security, by David Adesnik and John Hannah (Foundation for the Defense of Democracies). This clear-eyed monograph suggests what Trump policies and achievements should be preserved by President Biden, especially regarding China, Iran, and the Abraham Accords. “There are lessons to be learned from the outgoing administration. We cannot simply dismiss four years of policymaking because Trump’s legacy is indelibly stained (by the Capitol riot of January 6).”

The Taming of the Jew, by Tuvia Tenenbom (Gefen). This abrasive yet astute author has given us yet another of his revealing travelogues, this time through the UK, where he discovers Israel and Jew haters under every shrub. Like in Catch the Jew and other previous books, Tenenbom is hilariously coarse, even embarrassing. But he does manage to peel away the polite veneer from some truly ugly anti-Semites.

Jabotinsky: A Life, by Hillel Halkin (Yale). Halkin masterfully explicates Jabotinsky’s political thought – as both a territorial maximalist and a principled believer in democracy – by drawing the cultural and intellectual landscape in which he developed. An empathetic presentation of this right-wing leader, the first of its type in English in several decades.

Exodus: A Parsha Companion, by Rabbi David Fohrman (Maggid and AlephBeta). Like his previous books on Genesis and the Scroll of Esther, this very creative teacher detects textual patterns and subterranean themes that seem to leap off the pages once pointed out. Fohrman’s writing style is chatty and casual, almost as if he were in the room coaxing you to delve deeper. But rest assured, the content is creative and profound. The parallel videos on his website are works of art.

Rav Asher Weiss on Emunah & Bitachon (Mosaica). Rabbi Weiss of Jerusalem is a hassidic and halachic Torah luminary revered and consulted by almost all factions of the Orthodox world. He has bravely tried to lead the haredi world into strict compliance with coronavirus safeguards. This book collects his many sharp novellas, lectures, and letters about trust in G-d, righteous faith, and the nature of Divine Providence.

The Crowns on the Letters: Essays on the Aggada and the Lives of the Sages, by Rabbi Ari Kahn (Ktav). Kahn is one of the finest expositors in English of Torah and Jewish mysticism. Here he offers immensely learned interpretations of Talmudic tales about Hillel and Shammai, Akiva and Shimon bar Yochai, Resh Lakish and Rabbi Yochanan, and of themes in Jewish thought like messianism, repentance and the uniqueness of Israel.

Rav Noah Weinberg: Torah Revolutionary, by Yonosan Rosenblum (Mosaica). This is a simultaneously admiring and critical biography of late founder of Yeshivat Aish HaTorah. It details Rav Noah’s idiosyncratic and often controversial approach to Jewish outreach (kiruv, or chazara beteshuva), his impact on the Jewish world in combating assimilation, and the ways in which his disciples have moved on and beyond him. Chock-a-block full of pithy stories and life-wise witticisms.

Navoah Shearecha (Enter Thy Gates): Theology and Philosophy, History and People, by Rabbi Chaim Yeshayahu Hadari (Hebrew: Pri Hadar, two volumes). A posthumous collection of essays by the prolific Yeshivat Hakotel dean – on the Sabbath, holidays, Jerusalem, education, politics and diplomacy, contemporary religious leaders, his own life and that of students. Another ten volumes are planned!