US President-elect Joe Biden ought not jettison the outgoing administration’s Mideast achievements – successful policies that made the US and Israel safer and stronger! – because of Trump’s turpitude. 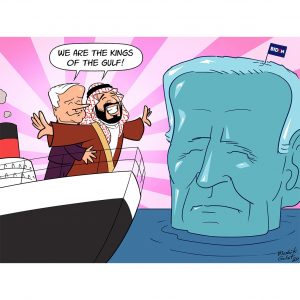 It is easy and almost natural to throw out the baby with soiled bathwater. But it is a mistake to do so.

What I mean is that it would be a colossal mistake for the incoming American administration to throw out the Trump administration’s Middle East policies – successful policies that made the US and Israel safer and stronger! – because of outgoing President Donald Trump’s vulgarity and improbity.

Indeed, distinguishing between a politician and his policies is hard. It takes political maturity and self-restraint to do so. Most presidents fail at this. But President-elect Joe Biden must make every effort to avoid falling into this trap – despite the poisonous partisan climate in Washington created first by President Obama and his adversaries, and appreciably amplified by Trump and his adversaries.

For the benefit of Mr. Biden, and for the benefit of Israelis too (who owe a debt of gratitude to Trump), here is a summary of the Trump administration’s Mideast policy innovations and accomplishments. Biden should be building upon these valuable advances, not bulldozing them.

* Insisting on historical truths: The Trump team did a great service to the cause of long-term Israeli-Palestinian and Israeli-Arab peace by insisting and acting on basic historical truths that long have been distorted by “peace-process professionals” and the so-called “international consensus.”

Trump moved the US embassy from Tel Aviv to Jerusalem, recognizing that Jerusalem has been the capital of the Jewish People for thousands of years and of the modern State of Israel since its founding. It also was affirmation that Jerusalem must never again be divided.

Furthermore, the “Pompeo Doctrine” made it clear that Jews are not interlopers or “illegal settlers” in Judea and Samaria, but rather indigenous to the Land of Israel.

Trump’s acceptance of Israeli sovereignty on the Golan Heights also was overdue recognition of basic strategic and historic realities; a move that again serves to purify Mideast discourse from calcified and unrealistic expectations that deny Israel secure borders.

It did so by treating Palestinians as responsible adults, with no free pass regarding the type of governments they establish. It did so by cutting corrupt Palestinian sinecures like funding for UNRWA (which also keeps alive the destructive Palestinian expectation of refugee return to Israel), and funding for the Palestinian Authority (which pays terrorists and their families for slaying Israelis, and which glorifies terrorism in its schools and media). It closed the PLO office in Washington DC (which was a source of venomous propaganda against Israel). It blocked UN and ICC moves against Israel.

Most importantly, the Trump Mideast peace plan of last year dismissed the ossified and unrealistic formula of the past 25 years for an Israeli-Palestinian endgame, which was based on maximal Palestinian demands alongside minimal regard for Israeli security needs and national-historic claims.

I believe that despite UN, EU, and all other attempts to ignore the Trump outline for the future, its basic parameters will prevail over the long-term (including eventual application of Israeli sovereignty over strategic sections of Judea and Samaria).

The plan is a serious and detailed effort to answer basic needs on both sides – Israeli security and rights, Palestinian prosperity and freedom – without reverting to massive human dislocation or risking radical Islamist victory. It is hardnosed and pragmatic, and it jibes with a broad Israeli consensus.

* Pushing-back against Iranian hegemony: Trump decided that the US would brook no more American charity for Iranian lies, including Iran’s ludicrously vague commitments under the JCPOA agreement negotiated by President Obama and the P5+1. Trump withdrew America from the sloppy and dangerous deal, making the point that its early “sunsets” deemed the entire enterprise hollow.

Trump decided to exact a price from the Iranian regime and its terrorist militias for fomenting violence across the region, for developing ballistic missiles, and for illicit nuclear bomb development. The administration struck at Iranian terrorist leaders and supported Israel’s ongoing defensive strikes against Iranian military posts in Syria and elsewhere.

The Trump administration put Iran on the defensive, as opposed to the Obama administration which funded (through sanction relief) gargantuan growth in Tehran’s regional subversion and terrorism.

Overall, Trump made it clear that the US would resist radical Islam and partner with its natural allies in the region – Israel and many Gulf countries plus Egypt – in this regard. This was important pushback against the impression left by the Obama administration that America’s interest may be to strengthen alliances with radical Islamic forces in the Mideast like the Moslem Brotherhood and the Shiite ayatollahs of Iran.

* Facilitating the Abraham Accords: All the above, especially the firm hand shown to Palestinians and Iran over four years, laid the foundation for the lightning-quick cluster of normalization treaties in 2020 between Israel and the UAE, Bahrain, Sudan, and Morocco – with the tacit approval of Saudi Arabia.

The “Abrahamic narrative” of regional reconciliation with Israel, based on the sharing of a common Biblical heritage (alongside shared commitment to stability and prosperity), will prove to be the administration’s ultimate foreign policy legacy.

History will properly credit the Trump administration with a Mideast strategy that brought about the beginning of the end of the Arab-Israel conflict. Scholars of diplomacy ultimately will acknowledge that the administration helped birth a dynamic that makes the Middle East and the entire Western world, and of course Israel, a brighter and more secure place to live.

And note: The Trump administration helped generate genuine, warm peace between Israelis and Arabs without causing Second Intifada-style Palestinian terrorist attacks. Remember that more than 1,000 Israelis were slaughtered as a direct consequence of the problematic Oslo Accords.

Some might nevertheless question whether in retrospect all these undeniable foreign policy and defense gains were worth the price of tolerating a president who has been uncouth throughout and who increasingly undermined basic democratic norms.

But this is beside the point. To my friends and colleagues on the left who are revolted by all things Trump, I say: Jeer the man if you must, but do not fritter away the rewards he won for America and its true allies.

Build on Trump’s triumphs (even you cannot stomach giving him public credit for such) and crest them with your own signature touch. Do not jettison the outgoing administration’s strategic wisdom and authentic achievements just because of Trump’s turpitude.

PrevPreviousA Crystal Ball on 2021
NextFourteen favorite books of 2020Next