Defend the Temple Mount for Jews and Moslems alike

The Emiratis and Bahrainis are paying the price for Israeli government malfeasance in handling Har HaBayit, the Temple Mount. The Wakf has been allowed to run wild, turning the holy site a base of hostile operations against Israelis, and now also against anybody who makes peace with Israel. 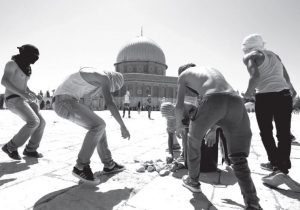 Prime Minister Netanyahu is likely to visit the United Arab Emirates and Bahrain later this month, following the signing several months ago of peace accords with these two Gulf countries. Surely, he will be warmly welcomed.

But ask yourselves: Why are there no plans in the works for a visit to Israel by the Crown Prince of Abu Dhabi, Mohammed bin Zayed, or the King of Bahrain, Hamad Al Khalifa? Wouldn’t they be warmly welcomed here too?

Indeed, these brave Arab leaders undoubtedly would be feted in Israel, both in the business orbits of Tel Aviv and the national halls of power in Jerusalem.

But there is an island of extra-territorial land in Jerusalem, very central to a visit of any major Arab leader, where the Gulf monarchs will not be welcomed. Just the opposite is true. They will be attacked. The imams at this site will rally against them, even exhorting the masses to riot in protest of the visiting monarchs.

I am certain that the embarrassment and trouble that a senior Emirati or Bahraini visit to this site would cause is one of the major reasons that no such visit is currently being planned.

I am referring, of course, to the Temple Mount, which formally is under Israeli administration and diplomatically under Jordanian patronage, but in reality is controlled and dominated by the Palestinian Authority through the radical Islamic trust called the Wakf.

The Palestinians and their Wakf are furious about the new peace treaties signed by these Gulf states and Israel, and have made it clear that Emiratis and Bahrainis are not welcome to pray in Al-Aqsa Mosque on the al-Haram Al-Sharif.

As if the Palestinians own this site and have the right to deny prayer there to any Moslem that does not dance to their tune. As if the Wakf has the right to decide who sanctifies and who “desecrates” Al-Aqsa by their political perspective. As if the Palestinian Authority has the prerogative to order the stoning of Arab pilgrims at the site or their shaming by throwing shoes and blood-curdling epithets at them.

Alas, this is exactly what happened recently when Emirati and Bahraini delegations ascended the Temple Mount to pray there. The visitors were forced to enter the compound under Israeli police protection as Wakf ruffians chanted slogans denouncing them as “Zionist stormtroopers and settlers” who were “violating the sanctity” of the mosques.

Shadi Mtour, a Fatah leader in eastern Jerusalem, told reporters that “any (Arab) delegation visiting Jerusalem through the gates of the occupation is not welcome.” Other Palestinians demanded that the “contaminated carpets” where the Gulfies prayed be replaced.

Last Friday, Bahraini visitors to Israel led by Sheikh Khalid bin Ahmed al-Khalifa, a representative of the Bahraini monarch, prayed at al-Aqsa without stating their nationality out of fear that they would be thrown out of the site. “If we had told them where we were from, they would have prevented us from going up,” al-Khalifa told IDF Radio.

Al-Khalifa, who heads the King Hamad Global Center for Peaceful Coexistence, was furious. “Al Aqsa is not just for the Palestinians. It belongs to the entire Muslim world. It is inconceivable that they tell someone, ‘You normalized with Israel: You won’t pray in Jerusalem.’ This is a new form of (Palestinian) terror.”

Nevertheless, the Palestinian Authority mufti of Jerusalem, Sheikh Mohammed Hussein, issued a fatwa (Islamic ruling) banning Muslims from praying at al-Aqsa Mosque within the framework of normalization agreements between Israel and Arab countries.

Wakf and Islamic movement provocateurs regularly attack Jewish visitors to the Mount. They even have attacked Jewish worshippers at the Western Wall below the Mount.

They have restricted visitation rights to the holy Mount for all non-Moslems; have hijacked the pulpits in the mosque on the Mount to preach hatred and violence against Israel; have purveyed a canard about the Al-Aqsa mosque being under attack from Israel in order to rile up the Palestinian public and broader Islamic world; and have conducted vast and illegal construction projects on the Mount and underneath it, willfully destroying centuries of Jewish archaeological treasures.

In fact, Palestinian leader Mahmoud Abbas continues to roil the waters and foment violence against Israel by repeating the canard that “Al-Aqsa is in danger.” He continues to stoke a broad-scale campaign against the authenticity of Israel’s historic rights in Jerusalem.

In September 2015 he screeched about “filthy” Jewish feet that were “desecrating” holy Islamic and Christian holy sites in Jerusalem. “Al-Aqsa is ours and so is the Church of the Holy Sepulcher,” he bellowed. “They (the Jews) have no right to desecrate them with their filthy feet. We won’t allow them to do so and we will do whatever we can to defend Jerusalem.”

Abbas then fulminated about (false) Jewish threats to the mosques on the Mount, and praised the mourabitoun (Islamic gangs posted on the Mount to accost non-Moslem visitors). “Each drop of blood that was spilled in Jerusalem is pure blood as long as it’s for the sake of Allah. Every shahid (martyr) will be in heaven and every wounded person will be rewarded, by Allah’s will.”

It should be noted that Abbas revs-up tensions around the Temple Mount every summer, in advance of his appearances at the UN General Assembly; a cynical and desperate ploy aimed at gaining global attention. His ambassadors have repeatedly brought resolutions to international forums such as UNESCO that deny Jewish history and rights in Jerusalem and Hebron.

I PLACE THE ultimate responsibility, and blame, for the deteriorating situation in and around the Temple Mount on the Israeli government.

Jerusalem always prefers to “quiet” things down and “restore calm.” It chooses to maintain a situation whereby the Palestinians exercise exclusive religious and national rights on the Mount and have rigged the site as a base of attack, while Jews have only limited visitation rights on Har HaBayit and are forbidden from praying there.

Now the Emiratis and Bahrainis are paying the price too for that Israeli government malfeasance.

The Netanyahu-Gantz government would enjoy widespread public backing for action to parry Palestinian and Islamic incitement in Jerusalem and to solidify Israel’s rights on Har HaBayit. Pan-Arab rights too. Only a forward-looking and affirmative Israeli stance can create a new situation of just compromise on the Temple Mount.