The ‘Sand Curtain’ has fallen

The Sand Curtain between Israel and the Arab world has fallen, like the Iron Curtain 30 years ago, but some of the world has difficulty rejoicing in the breakthrough. The Left assiduously is poking holes in the Abraham Accords and making sourpuss faces whenever the Roadrunner-fast advances in Gulf-Israel ties are mentioned…

The speed with which Israeli ties to the United Arab Emirates and Bahrain have taken off, and the genuine warmth experienced by every Israeli business delegation and tourist group in these countries, is astounding. It is a lightening peace bonanza, a whirlwind of almost Biblical proportions.

The American, Israeli, and Bahraini foreign ministers embraced each other in Jerusalem this week like they were old friends. High-level American diplomatic efforts could soon bring Morocco, Niger, Oman, and Saudi Arabia to the party too.

Three Emirati and three Israeli airlines will be operating daily flights to Dubai and Abu Dhabi by March. (Israir alone has sold 2,000 tickets for the coming month). The Emirati flights from Ben-Gurion Airport will be timed to connect with Emirates flights from the Gulf to the Far East, giving Israelis new routes to China, Japan, Thailand and more.

Venture capitalists from Tel Aviv and Dubai are scouting-out joint investment opportunities in cybersecurity, fintech, aggrotech, food security, educational technology, and healthcare. Bilateral business chambers have been established, including a Jewish-Moslem women’s business council and a youth council. As one Emirati investment house executive enthused to The New York Times, “It’s like falling in love!”

Academics from the Emirates and Israel are participating in each other’s conferences. Israel’s two main strategic think tanks, the Institute for National Security Studies and the Jerusalem Institute for Strategy and Security, each have signed research partnerships with leading Emirati institutes. Tourist packages for Israelis and for Jews everywhere to the Gulf are sprouting like mushrooms, and the Emirati tourists to Israel are coming soon too. These are the beginnings of real people-to-people engagement; something that Israel has never enjoyed with the publics in Egypt or Jordan.

The “Sand Curtain,” like the Iron Curtain 30 years ago, has fallen.

It is impossible to deny that this fantastic new Mideast dynamic strengthens Israeli and Western strategic interests, while weakening Iran, Turkey, Russia, China, and the radicals among Palestinians.

It is further impossible to ignore that a dazzling new religious reconciliation discourse has been triggered by the “Abraham Accords”; a discourse that accords religious legitimacy to Arab peace with Israel.

By explicitly referencing the Abrahamic common heritage of Moslems and Jews in the foundational document of this revolution (deliberately named the “Abraham Accords”), the peace accords implicitly acknowledge that Jews are a Biblical people indigenous to the Land of Israel. This is a blunt rejection of the ongoing Palestinian campaign to deny and criminalize the Jewish People’s historic rights in Israel.

UNFORTUNATELY, some around the world remain begrudging in their embrace of these blessed developments.

For the extreme left, it is hard to swallow that the fact that Israel is demonstrably a force for good, knowledge, prosperity, and stability in the Middle East. After all, that is the reason the UAE and Bahrain are bandwagoning around Israel!

Second, the left is reluctant to give credit to Donald Trump or Binyamin Netanyahu for anything, even when the result is obviously so beneficial.

Third, the left and center-left, including the incoming Biden administration, wishes to reinstate the disastrously weak JCPOA deal with Iran; a deal that Israel and its Gulf partners were, and remain, adamantly opposed to.

In fact, a common front against the hegemonic designs of Iran is the glue that underlies Israel-Gulf relations. As a result, the Biden administration and its European partners are going to face stiff opposition from Gulf and Israeli leaders if/when Biden & Co. broach another softie deal with Iran.

Fourth, some are uncomfortable with the renewed “religious” discourse about Biblical patrimony and rights, as described above. To leftist ears, this smacks of Evangelical Christian and right-wing Orthodox Jewish standpoints. The only type of “rights” they are comfortable with are the liberal, politically-correct, intersectional kind – in which Palestinian rights are paramount.

Fifth, it certainly upsets the left that the accords sideline the Palestinians. Their struggle is no longer the “crux” of Middle East conflict. At the very least, the Sunni states partnering with Israel question whether there is an “urgent need” or sufficient justification to give the Palestinians a state of their own.

For all these reasons, the Left assiduously is poking holes in the Abraham Accords and making sourpuss faces whenever the Roadrunner-fast advances in Gulf-Israel ties are mentioned.

One way of doing this is giving a cold shoulder to US and Israeli allies in the region like Egypt and Saudi Arabia, because of their human rights abuses. For example, Biden’s top foreign policy advisor Tony Blinken speaks of “reassessing” US ties to Riyadh to punish Crown Prince Mohammed Bin Salman for the murder of Saudi journalist Jamal Khashoggi in Istanbul.

He also talks of pressuring the autocratic government of President Abdel Fattah al-Sisi in Cairo, without regard for the very bad (Moslem Brotherhood) alternatives to his regime. (Sisi has proven to be Israel’s best Egyptian ally since the days of Anwar Sadat).

Another method of souring the Abraham Accords environment is to manufacture flashpoints between the US and Israel, like this week’s ridiculous controversy about developing the Givat HaMatos neighborhood in southern Jerusalem. For the “Palestine Firsters,” like the EU, UN and Peace Now, Givat HaMatos has become a “settlement” whose development will “kill the two-state solution.” (Utter nonsense!)

Again, this matter is being passionately and purposefully puffed-up to put an acerbic edge on Biden-Netanyahu relations; and to curdle the sweet cream of Gulf-Israel relations.

Instead of acting to taint the Abraham Accords ecosystem, the left ought to be working to convince their Palestinian brethren that a durable peace with Israel is now possible, with broad Arab backing.

Instead of letting the Palestinian Authority get away with violent, and radical moves like issuing a fatwa (religious decree) banning Emirati Moslems from visiting or praying on the Temple Mount (!), the left should be pressing the PA to cut its ties with Hamas, Iran, and radical Islamist Turkey; and to welcome the role that the UAE and Bahrain can play in an expanded peace process.

The left should be pressing PA president-for-life Mahmoud Abbas to cease his rabid anti-Israel rhetoric, and dial-down his expectations. There will be no reverting to stale and unworkable formulas based on maximalist Palestinian demands (and minimalist regard for Israeli security needs and national-historic claims).

I am referring, of course, to discredited formulas involving the uprooting of settlements, Israeli withdrawals from most of Judea and Samaria, and a division of Jerusalem. That ain’t going to happen, no matter how fiercely Abbas attacks Israel in international forums or how impolitely President Biden presses Israel – to left-wing applause.

The author is vice president of the Jerusalem Institute for Strategy and Security. He will lead discussions of diplomacy and defense on a “Kosher Travelers” English-speaking tour of the UAE next month. (See advertisement below.) 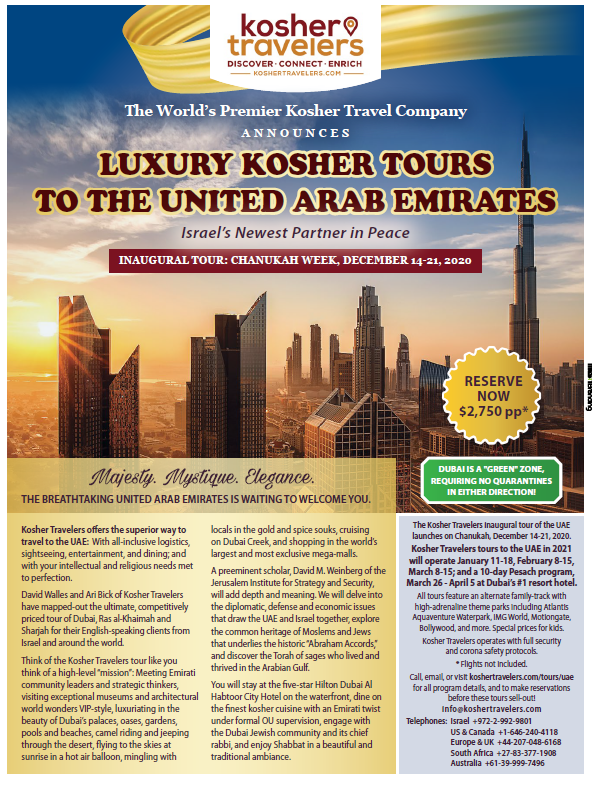 PrevPreviousThe theology of Rabbi Sacks
NextHonoring Kurt Rothschild at 100Next