The theology of Rabbi Sacks

Rather than elaborate on the incredible achievements and wide influence of the late, great, erudite and eloquent Rabbi Sacks, I offer a primer on his theology: His key concerns, beliefs, and recipes for a better future. 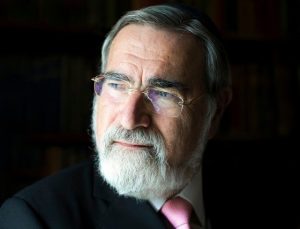 Every eulogy delivered or published this week about the late, great Rabbi Dr. Lord Jonathan Sacks saluted him as a kiddush Hashem, a walking sanctification of G-d’s name in both the Jewish and non-Jewish worlds

That indeed he was – among kings, philosophers, theologians, politicians, congregants, and students alike. No-one else in recent decades made Judaism more relevant on the world stage. Rabbi Sacks was erudite and eloquent with a piercing vision of morality for the modern age.

But rather than elaborate further on his achievements and wide influence, I offer here a primer on Rabbi Sacks’ theology: His key concerns, beliefs, and recipes for a better future.

Secularization of Society: Throughout his written works, and especially in his recent volumes on confronting religious violence, on morality, and on Leviticus (“The Book of Holiness”), Rabbi Sacks tracked the disastrous impact of “secularization” since the seventeenth century, including the secularization of knowledge, power, economy and culture – making religion seemingly redundant.

“What the secularists forgot,” wrote Sacks, “is that Homo sapiens is a meaning-seeking animal.” Technology, the market, and the liberal democratic state “give us choices, but don’t teach us how to choose. They provide neither identity nor the set of moral sensibilities that are inseparable from identity: loyalty, respect and reverence.”

His recipe for repair was the building of “covenantal communities” based on a “we” consciousness (where people share concerns for one another), rather than “I” awareness (individualism that atomizes society). He subsequently sought to show how tribalism can be balanced with universality; how spiritual and social cohesion can be synthesized with respect for liberty of conscience.

Family: Nothing was more important to Rabbi Sacks than the rebuilding of the traditional family. He linked today’s terrible demographic and societal upheavals – addiction to debt and drugs, high depression and suicide rates, child abuse and loneliness, even the growing gap between the super-rich and the poor – to the breakdown of family cohesiveness, which for centuries has been associated with religious faith.

In an address he delivered at the Vatican in front of the Pope and many cardinals, Rabbi Sacks said: “In the face of a deeply individualistic culture, we offer community. Against consumerism, we talk about the things that have value but not a price. Against cynicism we dare to admire and respect. In the face of fragmenting families, we believe in consecrating relationships. We believe in marriage as a commitment, parenthood as a responsibility, and the poetry of everyday life when it is etched, in homes and schools, with the charisma of holiness and grace.”

The Dignity of Difference: Rabbi Sacks argued that the truth at the heart of monotheism is not one G-d, one way, one truth; but unity in the Heavens that creates and legitimizes diversity down here on earth. This means respecting, not just tolerating, people’s differences to create truly free society. In fact, dissent (the right to be different) is built into the Bible and the Jewish DNA, with Judaism being “a sustained protest against authoritarianism and empire”; the “contra voice in human conversation” (– which partially explains the of persistence of antisemitism, see below).

Since basic humanity precedes religious differences, Rabbi Sacks preached a covenant of human solidarity, meaning friendship between religions and joint social action to better the world “on the ground.” He even outlined a path towards mutual respect between Judaism and Islam, based on a creative interpretation of the Biblical story of Abraham, Isaac and Ishmael (who seem to have reconciled later in their lives).

Responsibility: Rabbi Sacks rejected the tragic and fundamentally meaningless sense of life posited by the Greeks and contemporary secular-scientific worldviews. By contrast, religions of hope create healthy cultures of responsibility, he said. This empowers us to take risks, engage in long-term projects, and refuse to capitulate in the face of despair. “The flames of injustice, violence and oppression are not inevitable. We must refuse to accept the world as it is…We are summoned to the long journey at whose end is redemption.”

“Blame cultures” externalize conflict and suffering, to find another culprit and lash out with violence at contrived enemies. “Hate and the blame culture go hand in hand, for they are both strategies of denial.” (Rabbi Sacks identified radical Islam as hateful blame culture).

We Have Answers: Rabbi Sacks believed with every synapse of his brilliant mind and every fiber of his soul that Jewish thought and the Bible offer wisdom that is exceedingly relevant to the greatest social and political challenges of our day. For example: “Long before Plato and Aristotle, and long before Marx, Rousseau and Hobbes, the covenant of Sinai taught the primacy of right over might, and the courage disobey immoral or illegal orders. The politics of freedom was born at Sinai.”

On Science and Religion: Rabbi Sacks saw no contradictions between religion and science (and wrote an entire book on this matter) because they address two very different issues.

He wrote: “Science takes things apart to see how they work. Religion puts things together to see what they mean. And we need them both, the way we need the two hemispheres of the brain.”

“Science practices detachment; religion is the art of attachment, self to self, soul to soul. Science sees the underlying order of the physical world. Religion hears the music beneath the noise. Science is the conquest of ignorance. Religion is the redemption of solitude.”

Israel and Antisemitism: Rabbi Sacks viewed modern-day Israel as a shining example of what the reborn Jewish People can do as a nation; truly a light unto the nations. But more than succeeding at high-tech, he viewed Israel as an opportunity to construct a society based on justice, law, kindness, and mercy; a society where everybody has dignity and feels a sense of belonging.

Rabbi Sacks did not make Aliyah to Israel a focus of his lifework. But as global antisemitism exploded over the past decade with anti-Zionism as a core component, he took to powerfully defending Israel in the political sphere. He wrote one of the most inspired essays ever on new and old antisemitism (“Not Only One,” in his volume of collected essays on Passover), and broke with British tradition by speaking out compellingly against Jeremy Corbyn’s leadership of the Labor Party.

He told every non-Jewish audience that fighting antisemitism was their responsibility. “Jews cannot fight antisemitism alone. The victim cannot cure the crime. The hated cannot cure the hate… In the long run antisemitism harms those who practice it no less than those against whom it is practiced. Antisemitism is a profound psychological dysfunction, a disease masquerading as a cure.”

How G-d Speaks to Man: One of Rabbi Sacks deepest teachings was that G-d discloses himself in three ways – through creation, revelation and redemption – and that these three prisms are expressed in three distinct voices in the Bible (kings, priests and prophets) who in turn suggest three different (yet reinforcing) forms of the moral life.

Rabbi Sacks then took on the challenge of explaining the priestly sensibility as expressed in the book of Leviticus in concepts like holiness, purity and sacrifice; terms that are foreign to the modern ear and out of step with contemporary culture.

Rabbi Sacks explicated Jewish halacha (ritual and law) as “democratization of the priesthood” into an entire system of divine service for everyday Jews, based on boundaries of sacred and profane, the permitted and the forbidden.

To Rabbi Sacks it is all about living in the constant presence of the Divine, through a “choreography of grace.” “A sense of the sacred is what lifts us above instinct and protects us from our dysfunctional drives.” And he warned: “When human beings lose respect for God, they eventually lose respect for humanity.”

Jewish Pride and Identity: There is no way that Jews can bring the above messages to the world without being truly knowledgeable and committed Jews themselves! Rabbi Sacks was deadly fearful of Jewish poverty in learning Torah and loyalty to its precepts.

In recent years, he invested great efforts in the digital sphere, creating videos and whiteboard presentations, and giving TED talks and the like, about pride in being Jewish and the majestical beauty of studying Torah.

In addition, he was absolutely convinced that non-Jews most respect Jews who are self-respecting; meaning Jews who are knowledgeable of Judaism, proud to carry its banners, and conspicuous about doing so. Ambivalent, embarrassed, and ignorant Jews, on the other hand, elicit only scorn or worse, in addition to condemning themselves to identity oblivion.

The End: Only in recent years have Rabbi Sacks’ books begun to be translated into Hebrew, and his renown in Israel was growing. How sad it is that just when he could have had increasingly significant impact on both religious and secular communities in Israel, his remarkable run was cut short.

May G-d send us additional princes, priests, and prophets like Rabbi Sacks to shine a path forward.