Dr. Michael Levenstein OBM was my best friend, for 40 years. He was an esteemed family medicine doctor, a respected community activist, a wonderful family man, an enormous talmid chacham (Torah scholar) and a passionate Zionist. I owe him many debts of gratitude. So do readers of my columns, because over the past 25 years Michael was the best source of ideas. His insight, wit and passionate Zionism were an inspiration. Here I detail his many intellectual contributions. 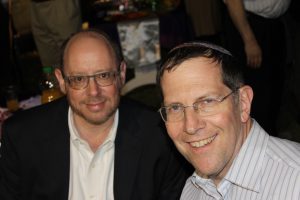 Last Shabbat, my best friend passed away at 60 after fighting cancer for three years. Michael Levenstein was an esteemed family medicine doctor, a respected community activist, a wonderful family man, an enormous talmid chacham (Torah scholar), and a passionate Zionist. I owe him many debts of gratitude.

So do readers of The Jerusalem Post, because over the past 25 years Michael was the best source of ideas for this column.

Michael’s keen insight into politics and society, his cynical wit, and his ideological zealotry for the State of Israel underlie many of my more than 750 op-ed columns in this newspaper. The writing always has been mine, but the germ of the argument often began with him.

Even when we did not agree on an issue about which I was writing, Michael read almost every draft column, and he usually had an argument, contention, or counterpoint to improve the text. He served both as the wisest sounding board and the best filter (alongside my wife, who has been my ultimate censor and finest proofreader).

Michael collaborated with me on many of my “annual” columns, such as the annual “crystal ball” look ahead into expected developments of the coming year, annual list of best Jewish books, annual list of most interesting Jews, and annual Yom Haatzmaut review of Israel’s spiritual condition.

Michael had a steady series of pet peeves to which I gave vent over the years, including distortions in IDF reserve duty (which Dr. Levenstein did in spades, long beyond the necessary term), and inequalities in the health system (especially in relation to eastern Jerusalem). Of even greater concern to him was the scourge of sinat chinam (baseless and unbridled political hatred), and the evils of hypocrisy in the way world leaders treat Israel.

Michael pressed me to write many times about the chutzpa and double standards of European leaders who knew only how to “Goldstone” Israel when defending itself against Hamas terrorists or to how condemn Israel for adding a few balconies in “settlements” in eastern Jerusalem or biblical Shiloh.

Rebuffing the continuous threats from unfriendly foreign leaders was one of Michael’s core principles. After suffering two thousand years of diaspora, dispersion, and persecution at the hands of European and other nations, Michael was insistent that the Jewish People in the reborn State of Israel need not apologize to the world for anything.

In fact, he felt that anger was a useful and necessary tool of diplomacy, especially versus the Palestinians and their apologists; that Israel should harness the vitality of anger instead of wallowing in woe in the face of BDS and other attacks.

Michael also had little patience for high-minded Western moralizing about the supposed “brutalization” (not) of Israeli society and the “cycle of violence” in Palestinian-Israeli conflict. There is no moral symmetry whatsoever between Israeli and Palestinian societies, he would proclaim. Comparisons that place the two societies on the same moral plane are evil and untrue.

It endlessly bugged Michael that Israel gets almost no international credit for its manifold humanitarian medical activities, everywhere from Armenia to Uzbekistan; activities that stem from Jewish tradition’s abiding concern for healing, and from the State of Israel’s commitment to being a force for good in the world.  But of course, you would not know this from the international press or from UN reports.

Michael and I shared a distaste for the choke-hold of narrow-minded haredi politicians and rabbis on Israeli politics, so I wrote often about the rabbinical racket related to kashrut, conversion, and educational policies. The one development of recent years that gave us both more hope was the surge of young haredi men and women studying at college. Let us hope that the High Court of (In)Justice does not put an end to this blessed trend by mistakenly ruling against gender-separate class arrangements.

Dr. Levenstein was innately suspicious of “big talkers,” politicians who promised the sky and delivered little, from Shimon Peres to Binyamin Netanyahu.

Perhaps the most biting example of Michael’s wit was a column I wrote with his input in 1999 called “The Peres Pill.” It described a powerful drug invented by Israel’s elder statesman which induces hallucination and wishful thinking. It magically allowed one to imagine a “New Middle East” and assert that peace with Arafat and Abbas was possible.

The column was a riff on the medical paper insert that comes with most psychotropic drugs, describing therapeutic activity (– in the case of the Peres Pill it was most effective on a fatigued populace, or a public that had become affluent and comfortable); side effects (– causes withdrawal tendencies, plus deafness to Palestinian anti-Semitism and threats of violence); and recommended dosage (– do not swallow whole, and keep out of the hands of prime ministers and foreign ministers who need to secure the country).

In case of an overdose, the column recommended proceeding immediately “to a hospital emergency room or an emergency bomb shelter” and taking a Netanyahu pill for four years or more.

Michael was similarly skeptical of Prime Minister Netanyahu’s soaring promises to apply Israeli sovereignty to significant parts of Judea and Samaria. He correctly predicted that Netanyahu would not go through with the move. Michael had me urge Netanyahu to “build now, talk later.”

The Netanyahu-Gantz unity government should be building like crazy in all the critical and consensus settlement zones, I subsequently wrote, whether sovereignty over some or all the settlements is declared or not.

“Netanyahu should call his good friend Donald Trump and inform him that a building campaign is what Israel needs now, especially in E-1. After all, there already are clear understandings with the US to buttress Israel’s hold on the Jerusalem envelope through significant renewal of home construction. So why isn’t this happening?”

The last column I wrote reflecting Michael’s feelings and fears – as a doctor and a patriot – was published on August 21, a week before he died. Michael saw that all types of Israelis – from Hassidic rebbes to left-wing politicians – were flouting sensible health restrictions, and he feared disaster. The spiraling rate of current Covid infection seems to affirm Michael’s premonitions.

My article pressed for fastidious enforcement of social distancing rules and rigorous punishment by the government of coronavirus lawbreakers. “We need enforcement, enforcement, and again more enforcement.”

I added a classic Michael Levenstein witticism: “Somebody in Israel should get a prank Nobel Prize for inventing the fake concept of ‘capsules’ in schools and workplaces, in the army and at weddings. It is just not workable.” “Numskulls don’t spread the plague!” was his/my cri de coeur.

Which brings this week’s column to a close. Normally, I would have emailed this text to Mike Levenstein for his pre-publication comment. Alas, I can no longer do so because he has been precipitately summoned to the next world. But I hope that he nevertheless enjoys reading this column on his Heavenly smartphone, and that he accepts my love and appreciation.