Rabbi Haim Sabato’s elegy for Tisha Be’Av, mourning Israel’s loss of national unity and moral priorities, translated here into English for the first time, by permission of the author. He terms our current situation keter evion, a “pauper’s crown,” meaning sunk to rock bottom. Rav Sabato blames not only our politicians, but cultural leaders and educators too.

The most biting social criticism of these coronavirus times has just been published as a poem by Rabbi Haim Sabato. It is a Tisha Be’Av-style elegy (a kinah) mourning the loss of Israeli national purpose and moral priorities.

The author laments the replacement of Jewish values and unity – with partisanship, sectorial interest politics and crass materialism. He blames not only our politicians, but cultural leaders and educators too.

The elegy was published ten days ago in Yediot Ahronot by Rabbi Sabato, one of the most fascinating leaders in today’s Torah and literary worlds. He is both co-head of the Birkat Moshe hesder yeshiva in Maaleh Adumim, and the author of five celebrated novels.

His second novel, Ti’um Kavanot (translated into English as Adjusting Sights), was awarded the prestigious Sapir Prize for Literature in 2000 and the Yitzchak Sadeh Prize for Literature in 2002 (and has been made into a film). He also has published acclaimed Biblical, Talmudic and halachic commentary, and the deep theological discourse Seeking His Presence: Conversations with Rabbi Aharon Lichtenstein (Yedioth Books).

Rabbi Sabato uniquely fuses rabbinic Hebrew and an Agnon-like narrative style. He studs his sentences with lyrics and metaphors drawn from the Bible, Talmud and prayer texts, alongside a mastery of modern Hebrew linguistics that has earned him membership in the Academy of the Hebrew Language.

In this case, he employs the repetitive stanza structure of a Tisha Be’Av dirge, before offering a last-minute flourish of faith. He terms our current situation keter evion, a “pauper’s crown,” meaning sunk to rock bottom. This is the negative of keter elion, the highest crown, which in kabalistic thought means the most intense emanation of God’s presence in this world.

Rabbi Sabato’s elegy is translated here into English for the first time, with the kind permission of the author. 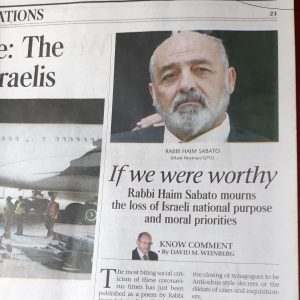 Our world has taken a hit. A pauper’s crown.

Would we be worthy, all public health experts would convene, discuss, resolve and recommend.

Not being worthy, the experts go each in their own direction, blaspheming the other, accusing, defaming.

Would we be worthy, pharmaceutical companies and scientists would unite to discover vaccines and drugs.

Not being worthy, each drug company races forward to beat rivals by a few days and fill its own coffers with millions.

Would we be worthy, those forced into isolation and quarantine would be thankful and acknowledge a debt to those who are protecting their health.

Not being worthy, each camp believes it is being hounded and locked down to humiliate it, batter it, and pierce its heart.

Would we be worthy, those who pray in synagogues and study in yeshivas would recall the Torah commandment to live by Torah maxim, “to live by them and not die by them.”

Not being worthy, they deem the closing of synagogues to be Antiochus-style decrees or the diktats of czars and inquisitioners.

Would we be worthy, those who earned in recent years significant sums of money would have saved-up for times of trouble.

Not being worthy, the wealthy leveraged their income to spend double their worth on luxury cars and palatial homes and extravagant travel, yet now are begging for handouts.

Would we be worthy, artists would be raising the spirits of our nation with their God-given talents.

Not being worthy, they furiously stalk street demonstrations.

Would we be worthy, aid would be directed to the weak, to strengthen and encourage them.

Not being worthy, each sector grabs what it can; gyms and pools and restaurants and banquet halls look out for themselves.

Would we be worthy, this moment of crisis and global pandemic could be the finest hour of our people, whose eternal values have shepherded it for generations; love your neighbor as yourself, (sustain) your brother that he may live aside you; do the righteous and good – (these teachings) would heal the hurt with overwhelming love.

Not being worthy, the Land of Israel is desolation and destruction; some demonstrate and others strike, some shout and others yank at the squawker’s beard; hatred and hostility pervade the atmosphere.

Alas, there was a precedent in Jerusalem 2,000 years ago; zealots burning with baseless hatred for one another torched food storehouses which could have sustained the city for three years. Will we today also set fire to the treasure troves of our country?

On whose neck does responsibility hang? Not only on the necks of our political shepherds, many of whom attend to themselves and not to their flock, as Ezekiel prophesized, but on the intelligentsia and the literati, cultural leaders, and religious scholars.

Had they educated towards neighborly love, modest lifestyle, altruism, and eternal and spiritual values; and not to the pursuit of riches, fame, perks of power and authority, and the persecution of one another – we would not have descended so. The spoiled fruits of today stem from seeds of devastation that were sown over decades.

“I planted you like a noble vine, all with choicest seed; how have you turned yourself into a degenerate, alien vine?” (Jeremiah 2:21).

Just maybe, the heart hoards hope. Concealed currents of untainted water bubble under the rubble and will surge to the surface and form pure wellsprings and purify our land.

Perhaps. Would we be worthy.

I hope that my translation has done justice to Rabbi Sabato’s exquisite Hebrew. And pray that by next year, we will merit a Haim Sabato sonnet of celebration.