This week marked the fifth anniversary of former President Obama’s JCPOA, the sell-out nuclear accord with Iran.

Below is a selection of my analysis from the past ten years on Iran’s drive for a nuclear bomb and Western acquiescence in this, led by Obama. I am sad to say that I smelled Obama’s rotten deal coming back in 2012.

In the coming months, will Trump act boldly with Israel to cut the Iranians down to size?

Click on the links to read the full articles. 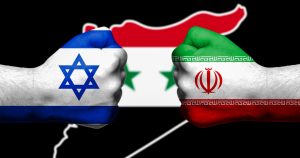 The NIE is Wrong about Iran, Again [3]

A new American NIE says that sanctions are causing Iran’s leaders to debate whether to move forward with their nuclear bomb program. Israeli analysts disagree.

An insidious new mythology is being advanced which replaces the Iranian threat with the “Israeli threat” to Middle East stability. This has the scent of incitement against, and demonization of, Israel. Political attention must be redirected to the place it most urgently belongs: the Iranian contagion that is inflaming the region.

The interim agreement with Iran that the P5+1 powers seem set to conclude with Iran in the Baghdad talks this week – involving the suspension of Iran’s 20 percent uranium enrichment – is dangerous on four levels.

Kicking the Iranian Can Down the Road [6]

Obama’s reelection means that Olmert is going to run against Netanyahu with Obama’s backing, that Palestinian statehood is bearing down on us, and that an American “grand bargain” with Iran at Israel’s expense is possible.

Is America moving to accommodation with Iran? [8]

Thomas R. Pickering and colleagues are paving the way in Washington for a climb-down from Obama’s declared policy of preventing (and not merely containing) Iran’s obtainment of a nuclear weapon.

The soft signals and acquiescent music coming from prominent US think-tanks are increasingly hard to miss. Washington wags are paving the way for a climb-down from Obama’s declared policy of halting Iran’s nuclear drive.

Washington vs. Jerusalem on Iran [10]

It is not “blind mistrust” of Iran or “militarism” or niggardly Israeli nay-saying that leads Israel to insist on complete dismantlement of the nuclear facilities in Iran, but rather hard-nosed realism and years of unfortunate experience with false and failed peace agreements.

Beware Obama’s emerging understandings with Iran. Heed his long-term goals of resetting America’s relations with the Muslim world, and don’t underestimate his willingness to undercut current allies (including Israel and Saudi Arabia) in the process.

The beautification of Bashar, the veneration of Rouhani [13]

The same “experts who once sought to sell us a “kind and gentle” Bashar Assad, are now working overtime to lionize and sanitize the new Iranian poster boy, President Hassan Rouhani.

Nuclear Iran: Nothing to lose and everything to destroy [14]

Prof. Steven David: “There are circumstances in which it is all too easy to see how an Iranian leadership – rational, cost calculating, reasonable and prudent as it may be – would still present a very real possibility of using its nuclear weapons against Israel.”

One day, the U.S. says sanctions will force Iran to relinquish its nuclear program. The next, it says delaying sanctions will make Iran more amenable to shutting down its program. Confusing, isn’t it?

America is not the only party that can play linkage politics. Netanyahu should now be saying to Obama: If you’re not going to protect Israel and the region from the Iranians, expect less cooperation from me on other files. You screwed Israel over Bushehr, so don’t expect me to give you Yitzhar.

Obama is purposefully engineering the denouement of the special relationship between America and Israel; just as he is doggedly overseeing the decline of America on the world stage.

Netanyahu believes with every bone in his body that the contours of Obama’s emerging deal with Iran are dangerous for the world and existentially disastrous for Israel. He should be applauded for the initiative to speak forthrightly on the Iranian threat in Congress next month. It’s called leadership.

What explains Obama’s zeal for a deal with Iran? [20]

It is ardor for Islam and sympathy for Islamic ambitions of global leadership, not just distaste for American overreach, that apparently fuels Obama’s secretive dash towards a deal with Iran. There is no other plausible explanation for his willingness to overlook Iran’s emerging Islamic empire.

Here is my suggestion for the speech that Netanyahu is to give in Washington on March 3 – on fortitude, fate and a binary moment of clarity. “Is America is ready to legitimize a seismic shift in the global balance of power through an irresolute and debilitating bargain with the Ayatollahs of Iran? I pray not.”

The notion that if Iran violates the nuclear accord all sanctions could be swiftly re-imposed is claptrap that insults the intelligence of any observer.

Sham smiles all around [23]

With four deadlines come and gone, it’s probably safe to predict that there won’t be a grand package deal with Teheran this weekend, or at all. Instead, we’ll get a lot of smiles, and agreement to continue talking indefinitely, without closure on Iran’s nuclear weapons drive. Obama will proceed to sell sham narratives about Iran, even as Khameini rebuffs and humiliates America.

The list of fundamental falsehoods about Iran that undergird the P5+1 accord with Iran keeps on growing. It is frustrating and infuriating. Here are nine of Washington’s fibs and feints.

In defense of its concordat with Iran, the Obama administration is peddling a growing list of misrepresentations: That Iran will be motivated to keep the agreement; that America can snapback sanctions; that the deal it will moderate or contain Iran’s aggressive ambitions; and that there was no better deal, and the alternative is war.

Obama’s nuclear agreement with Iran is meant to redirect the entire vector of American Middle East policy: To retreat from Pax Americana and allow Iran to take its place as a major regional power. That’s why Netanyahu won’t scale back his opposition. Obama’s retreat must be stopped, and the Iran deal must be made politically toxic.

The Ayatollahs see Obama as a supplicant, not a superpower. They understand this, alas correctly, as license to run wild. The “zhobour” meted out to American seamen reflects rising Iranian imperial cockiness.

The cash behind the Iran deal [28]

One of the Obama administration’s top shills for the sellout to Iran has been a lobbyist for Boeing all along. The celebration of the first anniversary of the JCPOA is marked by strategic drivel as cover for business greed and oversize ego.

There is an Israeli “grand strategy.” Washington misunderstands this. Israel should be expounding its worldview forthrightly. Its strategic posture makes a lot of sense in the totally transformed regional landscape.

Trumpian truth-telling about Iran, Syria and the Palestinians can improve the strategic environment, gut the Palestinian strategy of delegitimizing Israel, and improve the moral tone of American foreign policy. Rehabilitative discourse is critical for the Middle East.

How will he enforce or renegotiate the nuclear deal, confront Iran’s expansionism, and work with Russia simultaneously?

Trump and Netanyahu must together craft a strategy to combat the malign influence and hegemonic ambitions of the mullahs.

Confronting the con artists of Iran [33]

Iran is on the march, presenting a significant security challenge to Israel, to moderate Sunni countries, and to the West. No duplicitous decrees by supreme or smiling ayatollahs should deflect our attentions.

Waking up to the Iranian threat [34]

Hoping for regime change in Iran [35]

Might more be done to advance an Iranian counter-revolution? Israeli diplomat Uri Lubrani certainly thought so, and he was not naive. Pushback against Tehran’s gains in Syria would help, as would a tidal wave of sanctions against the Revolutionary Guards.

Nobody in the world has the right to criticize Israel’s defensive actions on the Gaza border, even if Israel had used significant force against the Hamas mobs – which it didn’t.

The JCPOA was based on Western charity for Iranian lies. After Israel’s intelligence coup, the question becomes this: Will JCPOA boosters continue to deny reality and accuse Israel of being alarmist? Will they continue to pretend they didn’t know, and to accept Iran’s naked denials? Can they possibly continue to defend the weak verification regimes and early sunsets of this inadequate accord?

President Trump is acting to restore America’s credibility as a world power after eight years of diffident presidential leadership. He is not frightened by the mobs of the Arab or Persian world or by their effete champions in the West. He doesn’t quake in his boots at the possibility of upsetting Mahmoud Abbas or Ali Khamenei….

Forcing Iran out of Syria [39]

Iran is attempting to create a “deterrence barrier” in Syria to protect its nuclear program. Israel must act forcefully against Iran even if this means full-scale war, says General Amidror.

Danger ahead: There are signs that President Trump is getting ready to ease the pressures on Iran and bargain for a new nuclear deal: A US-Iran “deal of the century.” This could be knottier and more nebulous than valuable. My fear is twofold: that Trump’s “maximum pressure” campaign will be cut short before Iran’s leaders truly have no choice but to capitulate to Western demands…

In eliminating Qassem Soleimani of Iran, Trump struck a blow for moral clarity. It should be considered not only a strategic move but an act of justice in foreign affairs.

The nuclear deal between the West and Iran has funded Iran’s aggression, rather than buy its moderation. Who will now curb Iran’s aggression and nuclear progress, and how? Trump’s penchant for grand deals that prove his greatness makes me worry that (in a second term) he could be tempted into a settlement with Iran that falls far short of what is necessary. On the other side of the aisle, most Democrats support re-entering the JCPOA and lifting some sanctions against Iran.