The new coalition handcuffs its rival blocks into near paralysis. Muzzling and manacling MKs by super-rigorous coalition discipline could be good for our political system and a balm for our national soul. Indeed, Israel needs fetters on its political passions, which have gone wildly out of whack. 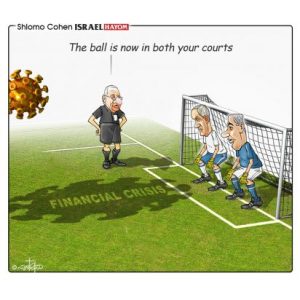 [4]The Israeli “emergency” and “unity” government that will supposedly be confirmed by the Knesset sometime in May is screwiest doohickey ever devised in a democracy.

The 14-page coalition contract reads like a divorce deal between two parties that hate each other’s guts and seek to divvy-up assets in a situation of no trust whatsoever; not as an agreement between two political partners that are coming together to heal the country.

It forms a bifurcated government where two legally embedded blocks can check each other in every possible way every minute of the day; where both Binyamin Netanyahu and Benny Gantz are forced to wear straightjackets that deliver punishing and painful electric shocks the split second either of them steps out of line.

Consider: Each side is given sweeping powers to stymie the other side. For the duration of the six-month “emergency” period, “both prime ministers” have a veto on all legislative initiatives. (Netanyahu can repeatedly extend the “emergency” period for additional three-month segments, but only if Gantz agrees).

Even after that, in the so-called “unity” phase, the chair of the powerful ministerial committee for legislation (Gantz’s ostensible justice minister Avi Nissenkorn) and the committee deputy chair (who will be a Likud MK) can stalemate each other at any time, on any agenda item, on any proposed bill. They must both agree, or nothing advances.

(There is one exception: The application of Israeli law to parts of Judea and Samaria, which Netanyahu is free to try to advance from July 1 without Gantz’s say-so).

If Netanyahu crashes the Knesset and calls elections, Gantz gets to become interim prime minister until a new government is crafted. On the other hand, if Netanyahu is nixed as “unfit to serve” by the Supreme Court, Gantz must resign simultaneously too.

If Netanyahu resigns early from the premiership, Gantz gets his 18 months, but then Netanyahu has the “right of return” to complete his term, which would allow him to lead Likud again from the Prime Minister’s Office into a 2023 election. If one side causes the state budget to fall in Knesset, the premiership is automatically transferred to the other side.

Does this make you dizzy? Sound like nonsensical legal-political mumbo-jumbo? Wait, there is more.

The prime minister (whether Netanyahu in the first period or Gantz in the second period) cannot appoint or fire ministers that are in the opposite block. Netanyahu and Gantz maintain separate fiefdoms. And there is a complicated, convoluted vote-weighting mechanism to ensure “parity” in all cabinet and other major committee votes, which essentially means that some Gantz-block ministers get to vote twice.

In other words, the coalition deal reflects deep distrust between the two rival blocks. It is a cockamamie contrivance purposefully designed to achieve political paralysis or mutually assured destruction. Both sides are neutered, except where they might, hopefully, agree on overarching policies, such as health and economic recovery master plans.

UNDER NORMAL circumstances, I would say that this is a terrible thing; an incoherent, convoluted, and impossible way to govern the country. It could fail in 1,000 different directions.

But these are not normal times. Israel cannot afford a fourth consecutive election amidst the coronavirus epidemic. And Israel’s most critical challenges (including the possibility of military conflict with Iran and/or its proxies) can best be tackled by a broad right-left government.

Even more important is the absolute and urgent need to tone down this country’s political heat; to restrain Israel’s raging political fevers after 18 months of furious campaigning.

Thus, handcuffing MKs into near paralysis may be a good thing. Muzzling and manacling them by super-rigorous coalition discipline could be good for our political system and a balm for our national soul. Israel needs a year or two or three of relative quiet and recuperation.

Indeed, Israel needs fetters on its political passions, which have gone wildly out of whack.

Compromise may not be possible in all these spheres, but at least the new government can lower the flames.

Indeed, bringing about a climate of relative calm is the greatest contribution the hybrid Netanyahu-Gantz government can make. The coalition may be a quasi-democratic, quasi-autocratic behemoth; a weighed-down, self-flagellating, and illogical creation stemming from force majeure. But national “unity,” however temporary and fragile, is necessary and worthwhile.

Perhaps our politicians will learn to cooperate a bit, putting broad national interests ahead of their narrow partisan goals. The vast majority of Israelis expect them to do so. Perhaps a spirit of bipartisan solidarity will emerge. Perhaps Netanyahu and Gantz will demonstrate true leadership and empathy for Israelis in hardship, especially when dishing out the bittersweet medicine (budget cuts and new taxes) that undoubtedly is coming. Halevai (may it be so).