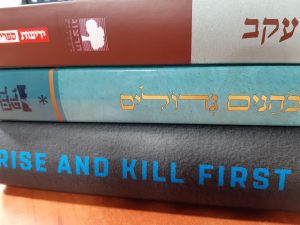 As time goes on, I find that my reading is narrowing to books on Israeli and Jewish matters, including Torah commentary; with fewer novels and less general history and politics. There is only so much territory one can cover!

Here are my recommended 2019 books.

#IsraeliJudaism: Portrait of a Cultural Revolution, by Shmuel Rosner and Camil Fuchs (JPPI). An innovative study that explains the blended Israeli-Jewish identity that is becoming the majority culture in Israel; both traditional and modern, rooted in religion but also anchored in liberal Zionist nationalism.

We Stand Divided: The Rift Between American Jews and Israel, by Daniel Gordis (Ecco). The author asks: How can American Jews possibly connect on a deep level with Israeli society (where vibrant new strains of national-traditional and spiritual identity are developing, as above) when in the US they have lost a sense of peoplehood and commitment to religion, and instead assumed an identity that is focused on little but progressive politics?

The New American Judaism: How Jews Practice their Religion Today, by Jack Wertheimer (Princeton). Based on 160 interviews with rabbis of all stripes, this book really should be named ‘How American Jews Don’t Practice Judaism Today.’ It is a requiem for a once-vibrant Jewish community, which now is running away from Jewish study, ritual and core beliefs (such as belief in God!), and replacing this with social action for gay and immigrant rights, and airy-fairy love-in meditations. Intersectional-izing and tikkun-olam-ing itself to death.

How to Fight Anti-Semitism, by Bari Weiss (Crown). The NYTimes columnist shows how anti-Semitism now finds a home in the US in identity politics and the reaction against identity politics, in the renewal of America First isolationism and the rise of one-world socialism, and in the spread of Islamist ideas. A powerful wake-up call against complacency, and a plea to save liberal democracy.

Fight House: Rivalries in the White House, from Truman to Trump, by Tevi Troy (Regnery History). A fast and fascinating read with deep insight from a presidential historian and aide which demonstrates that “good old fashioned rivalries” are the norm, not the exception; that such rivalries often lead to policies contrary to presidential and national intention; and that the Trump administration isn’t the worst of them in this regard.

Rise and Kill First: The Secret History of Israel’s Targeted Assassinations, by Ronen Bergman (Random House). A well-researched and comprehensive review from Haganah times to the eliminations of Imad Mughniyeh in 2008 and Mahmoud Al-Mabhouh in 2010. Provides perspective on the recent US strike against Qassem Soleimani.

Shadow Strike: Inside Israel’s Secret Mission to Eliminate Syrian Nuclear Power, by Yaakov Katz (St. Martin’s). This book, written by The Jerusalem Post’s editor-in-chief, reads like a spy thriller and offers valuable insight into the dynamics of the US-Israel defense alliance.

Exile: Portraits of the Jewish Diaspora, by Annika Henroth-Rothstein (Bombardier). This intrepid Swedish-Jewish journalist weaves together sweeping historical narratives and personal experiences to show how Jews from Iran to Finland (and Cuba, Turkey, Colombia, Tunisia, Morocco, Siberia and Uzbekistan) have persevered while preserving Jewish lore and culture.

Dust and Heaven: A History of the Jewish People, by Asael Abelman (Hebrew: Dvir and The Tikvah Fund). A bold attempt to cover the grand sweep of Jewish history from Biblical times to today, with a conservative and nationalist lens that emphasizes continuous Jewish scholarship and ceaseless yearning for Zion and the Messianic era.

The Ruling Party of Bagatz: How Israel Became a Legalocracy, by Simcha Rothman (Hebrew: Sela Meir). A shocking study of the Supreme Court’s gross over-interventionism in setting Israeli government policy from justices Zamir to Hayut. A call for re-balancing power between the court and the Knesset.

The Person in the Parasha, by Tzvi Hersh Weinreb (Koren). Advice for ethical and spiritual growth from a prominent community rabbi and clinical psychotherapist. Addresses a wide spectrum of human emotions and situations, including optimism, grief, integrity, bullying, conformity, conflict, envy, aging, parenting, leadership and more.

Honeycombs: The Amidah, by Reuven P. Bulka and Rikki Bulka Ash (Ktav). A commentary on Jewish prayer through the lens of rabbis Yonasan Eybishitz (the “Yearot Dvash”) and Yosef Hayyim of Baghdad (the “Ben Ish Hai”). The upshot: One must give to G-d (good deeds and honesty) not just request things from him.

Two High Priests: Rav Tzadok and Rav Kook, by Chaim Yeshayahu Hadari (Hebrew: Pri Hadar). A collection of essays by the late Yeshivat Hakotel dean on the mystical and nationalist thought of rabbis Tzadok Hacohen of Lublin and Abraham Isaac Kook of pre-state Israel. A study partner is recommended for this highbrow tome.

Jacob: The Story of a Family, by Jonathan Grossman (Hebrew: Herzog/Tevunot and Yediot/Chemed). Intricate literary analysis of 27 chapters in Genesis with careful attention to story structure and key words, showing that Jacob’s struggles mirror those of Abraham but without direct Divine guidance along the way. (Read Grossman’s superb commentary on Esther, Scroll of Secrets before Purim!)

The Talmud in a Nutshell, by Uri Brilliant (Hebrew: Kinneret, Zmora, Dvir). This indeed “brilliant” Daf Yomi teacher, who lectures daily to thousands of students via digital apps and the telephone, teaches the first page of each Babylonian Talmud tractate, illustrating the principles in each section. A great way to “taste” the Talmud.

I Find You Seeking Me, by Haim Sabato (Hebrew: Yediot/Chemed). Free-flowing and poetic discourse on aspects of Jewish faith by a yeshiva dean who is also a celebrated literary author. Worth reading for its elegant, soaring prose.

Watch for – Morality: Restoring the Common Good in Divided Times, by Rabbi Lord Dr. Jonathan Sacks (Hodder & Stoughton, forthcoming in March 2020), who is clearly the most profound expositor of Jewish thought today.