In eliminating Qassem Soleimani of Iran, Trump struck a blow for moral clarity. It should be considered not only a strategic move but an act of justice in foreign affairs. One must worry that down the line Trump could yet cut a deal with Tehran that doesn’t push Iran far enough away from the nuclear bomb or from Israel’s borders. But for the moment, Trump should be lauded for the nobility of his resistance to Iran; for smashing Soleimani and the apocalypse he represented. 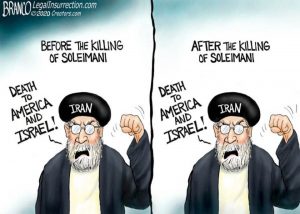 US President Donald Trump is a blatantly transactional politician, not a paragon of virtue. But in eliminating Qassem Soleimani of Iran, Trump struck a blow for moral clarity in international affairs; a weighty wallop against wickedness that hasn’t been seen in decades. For this, Trump should be extoled.

Wiser commentators than me have analyzed the tactical pros and cons of America’s hit on Soleimani: whether this will super-charge or hamper the regional troublemaking of the Iranian Revolutionary Guard Corps Qods Force, which Soleimani built into a true menace; whether the Ayatollahs will ramp-up towards, or dial-back from, full-scale confrontation with the US military; whether Iran will rapidly break-out towards a nuclear weapon or realize that it had best engage in renewed negotiations on the nuclear matter and more.

But whatever happens next, President Trump’s decision to target Soleimani needs to be celebrated for its rectitude; for the moral message it conveys. It should be considered not only a strategic move but an act of justice in foreign affairs.

Remember this: The Islamic Republic of Iran is a self-declared radical power that openly seeks to create Greater Persia; to export its revolution and impose it on the entire Middle East, if not beyond. It explicitly sees itself in civilizational clash with the West.

It believes that all means are legitimate in achieving its goals – from sending Shiite shock troops into battle across the region, to orchestrating terrorist attacks in Asia, Europe and the Americas, to developing nuclear weapons.

And Qassem Soleimani was an architect of Iran’s many near-genocidal wars against Sunni Arab regimes and peoples, against Israel and against America.

Despite this, there were undoubtedly many advisers in the US defense and foreign policy establishment that warned against striking Soleimani, just as Trump’s predecessors were counseled not to do so.

After all, there are calculations of caution, pragmatism, realism, diplomatic alliances, business interests, and political preservation that mitigate against an assault as dramatic as the targeted assassination of a foreign military leader.

Trump probably doesn’t have the historical perspective in mind, but we should.

I am reminded of historical inflexion points such as President Ronald Reagan’s “evil empire” speech regarding the Soviet Union, and George W. Bush’s “axis of evil” speech regarding Iran, Iraq and North Korea. These were moments of clarity, and I suspect that the elimination of Soleimani will prove to be so as well.

Furthermore, it is not wrong to compare the current situation with the need to confront Nazi Germany in the 1930s.

World leaders were reluctant to confront Adolf Hitler. Neville Chamberlain of Britain sought to curry favor with him, positing that Hitler was a man of peace. Franklin Roosevelt of the US was an isolationist who wouldn’t have confronted Hitler had the Axis powers not attacked the US. Joseph Stalin of the USSR also preferred to partner with Nazi Germany, until Hitler’s armies invaded the Soviet Union.

Today, when faced with an enemy that is potentially as lethal as Nazi Germany, many Western leaders nevertheless prefer accommodation with Iran. After all, there are calculations of caution, pragmatism, realism, diplomatic alliances, business interests, and political preservation that mitigate against confronting Iran. It’s easier to delay and deflect than fight a fiercely committed and skilled enemy.

And yet, Trump and his team, including his stalwart Secretary of State Mike Pompeo, have taken on the challenge. In defiance of conventional wisdoms that the “responsible” approach is to swallow Iran’s piecemeal provocations in order to avoid war, and that Iran’s hegemonic ambitions are anyway near-unstoppable, Trump preferred to draw blood and a red line. He defied the Ayatollahs instead of dancing with them.

Alas, consistency is not one of Trump’s strong suits, and therefore one must worry that down the line he could yet cut a deal with Tehran that doesn’t push Iran far enough away from the nuclear bomb or from Israel’s borders. But for the moment, Trump should be lauded for the nobility of his resistance to Iran; for smashing Soleimani and the apocalypse he represented.