My father, Prof. Henry Weinberg, warned decades ago of a snowballing assault on Israel as an “apartheid” and “illegal” state; and of enemy attempts to divide the Jewish People. 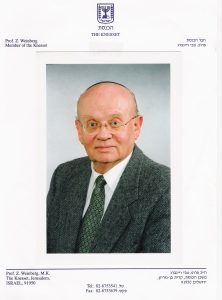 This weekend marks the 13th yahrzeit of my father, Prof. Henry (Zvi Meir) Weinberg, of blessed memory. He would have been 84 this year. His incredible life took him from pre-WWII Poland to the Ukraine, Russia, Siberia, Uzbekistan, France, Israel, US, Canada and then finally, Israel, where he was elected to the 14th Knesset. He lived and died in Jerusalem and merited a state tribute at his funeral.

He was fortunate to see all his children embrace the family’s Orthodox tradition and move to Israel, and he enjoyed many grandchildren here in Israel too.

In Jewish community circles, he is most remembered for four decades of tireless activism on behalf of Soviet Jewry, his passion for the political welfare of French Jewry, and his battles in intellectual circles for the State of Israel.

He was an excellent reader of history and contemporary political culture. He had a keen eye for antisemitism. He could sniff out intellectual anti-Semites no matter how many layers of fine clothes and refined arguments they donned.

He was sagely prescient in warning about the snowballing confluence of anti-Zionism and antisemitism, going back to the mid-1970s. He discerned the threatening intellectual trends very early on.

In fact, I am certain that he was one of the very first prominent academics and Jewish activists anywhere to notice that our enemies were gunning to apply the aspersion “apartheid state” to Israel. He warned of the great dangers inherent in this development and of a broader coming effort to criminalize Israel as an “illegal” venture.

Since then, of course, the attempt to brand Israeli leaders as “war criminals” has snowballed all the way to the International Criminal Court, to UN institutions, and to global university campuses.

In 1989 Prof. Weinberg wrote: “Generally, anti-Zionism cannot be separated from antisemitism because the evil that once had been attributed to Jews has come increasingly to be attributed to Israel, and the treatment that once was considered appropriate for Diaspora Jewry – isolation, delegitimation, and ultimate extinction – is now considered appropriate for the State of Israel.”

“The critics of Israel often use the same language and the same double standard as the critics of Jews in the past. If the Jews were once accused of ritual murder, the Israelis are now charged with wanton, deliberate murder of women and children.”

Prof. Weinberg’s pen was sharpest regarding antisemitism in France; a natural focus for a professor of French literature. In 1981, he published a detailed, damning indictment of the French highbrow newspaper Le Monde for its “irrational, deep-seated bias against Israel.”

The scholarly article caused a storm of protest in France where Le Monde is a holy cow, and the controversy grew in intensity when my father expanded his scathing critique of Le Monde and French intellectual and political leaders into a 1987 book, The Myth of the Jew in France 1967-1982.

He showed how the newspaper regularly compared Israelis and Nazis (long before the First Lebanon War made this odious equation fashionable) and excused Palestinian terrorism as “resistance” – a term that for most Frenchmen recalls the valiant partisans who fought German occupiers in WWII.

But of course, Le Monde admitted to no bias against Jews or Israel, he wrote. “In a country steeped in endemic hostility to Jews, yet priding itself on an old tradition of liberalism, the paper’s unique approach in maintaining the one without appearing to blemish the other, has guided and catalyzed France’s profitable relationship with the oil-rich Muslim world and its role as the leader of a policy advocating Europe’s alignment with the theses of some of Israel’s most dedicated enemies.”

My father viewed France as the European thought leader, and alas, he was correct. Since then, the horrible anti-Jewish and anti-Israel trends he discerned in France have spread throughout Western Europe.

In 1984, Prof. Weinberg incurred the wrath of progressive circles when he published a pioneering expose of the assault by “Leftist Jews” on Israel. He showed how many Marxist and assimilated Jews miraculously “re-discovered” their lapsed Judaism in order to attack Israel under the mantle of a “noble prophetic tradition.” In so doing, they hoped to “salvage their own tarnished images” as good anti-imperialists in the eyes of their non-Jewish comrades.

Charitably, my father expressed the hope that somehow some of these Jewish leftists would consequently increase their involvement in other aspects of Jewish life and eventually return to the fold. “Those who had been on the path to assimilation and had discovered in protesting Israel’s military action in Lebanon the importance of ‘Jewish values’ – may in the end see the virtues of other elements of Jewish culture and phenomenology,” he hoped.

Alas, the record shows that Jewish militancy under the flag of left-wing ideologies generally leads to alienation from Judaism. My father knew and mourned this in a postscript.

Prof. Weinberg understood that there was an organized campaign underway to alienate Diaspora Jews from Israel: “The enemies of Israel are playing on reemerging neo-diasporic sentiments among Jewish intellectuals and have become champions of a new kind of ‘Yiddishkeit.’ Yasser Arafat and the new custodians of the Jewish soul denounce the appearance of a new breed of defective, inauthentic Jews – the Israelis – whose crime is that they are insufficiently Jewish. This new tactic, with a ‘dual loyalty’ charge being hurled at Diaspora Jews, is part of the psychological warfare waged by the PLO and its allies. It involves smothering the Jewish people with compliments and deference, in order to conquer and divide.”

He called on all Jews to reject this dangerous propaganda campaign “without timidity and obsessive self-justification.” “The old strategy of no confrontation, no publicity, of sha shtil (lay low and be quiet), has now been proven to be mistaken. We must reject the hesitations of the past and be strong in our support for Israel.”

Truer words could not be written today, as the ICC threatens to prosecute Israel for war crimes and some Jews pile on. Prof. Weinberg’s warnings are even more relevant today than they were thirty years ago.

My father also wrote extensively on the history of entrenched political antisemitism in Russia. When the USSR began to crumble, he sensed an opportunity and organized a Canada-USSR Academic Dialogue on Jewish Themes, in Toronto and then in Moscow. These were the very first intellectual conferences of the glasnost era where Russian/Soviet antisemitism could be challenged, and Russian Jewish intellectuals could strengthen their emerging Jewish identities.

It was only natural that when my father made aliyah several years later he connected with Natan Sharansky and Yuli Edelstein and helped found the Russian immigrant party, Yisrael Be’Aliyah, and then joined the Russian immigrants in Knesset. That political party (and my father’s role in it) deserve a great deal of credit for the successful integration of Russian Jews in Israel.

In grand perspective, Prof. Weinberg’s life demonstrates the resilience of the Jewish People over the past century. Jews have overcome the destructive powers of Nazi Germany and the Soviet Union and proceeded to build a magnificent modern Jewish state in Israel. The Reichstag and the Kremlin were far more powerful than the ICC is today, so Israel will ride out the ugly lawfare from the Hague too. Like the Maccabees of Chanukah fame, the modern Jewish People will prevail. My father certainly believed that.

PrevPreviousForecasting the Mideast in 2020
NextA Crystal Ball on 2020Next