A consumer campaign is necessary to preserve Shabbat as an Israeli national cultural-religious asset. 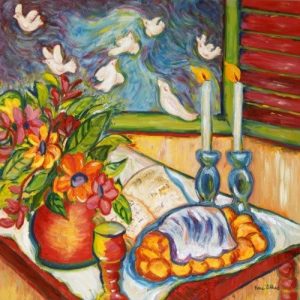 Alongside the widespread opening of shopping malls and movie theaters on Shabbat, there is less and less left of our national holy day, in what is supposed to be the only Jewish state in the world. Forty percent of all sales in the major national chain stores are now made on Shabbat, and 95% of cinemas operate on Shabbat too.

This breakdown of national consensus regarding the special status of the Jewish Sabbath in Israel might have been avoided had the “Gavison-Medan Covenant” of 2003 been embraced by religious and secular politicians alike.

That framework for a revised “status quo” sought to create a public and educational climate for compromise on Shabbat transportation, shopping and cultural issues. The proposed Covenant would have partially preserved the national sanctity of Shabbat and prevented commerce from crushing the social right to rest on Shabbat, while facilitating non-observant rights to entertainment and recreation resources on Shabbat.

Ruth Gavison (a liberal, secular law and human rights professor) was prepared to accept a Shabbat shopping ban while Yaakov Medan (a leading yeshiva dean and religious thinker) was prepared to stomach public transportation for cultural activities on Shabbat – a mutually painful but crafty conciliation.

Of course, there was an element of “coercion” involved in the legislation they proposed, but this was and remains a red herring.

Coercion is inevitable and necessary in defining the public square of society. Think, for example, about the law that mandates closure of all places of entertainment (including food establishments) on the eves of Yom Hazikaron (Remembrance Day for IDF fallen) and Tisha Be’Av. Isn’t that coercion too?

But if some national values are important enough, like the sanctity of Shabbat in a Jewish state or relief from a seven-day work week for the working class, indeed you impose restrictions on society; you sacrifice some personal freedoms for the greater good.

Alas now we have reached a situation where all such accommodations seem off the agenda. Anything that smacks of the mildest religious coercion is verboten in today’s Israeli political discourse. For the traditional and religious publics in Israel this is a lose-lose situation. Both commerce and transportation have blasted down the Shabbat barriers, with almost no restraints; and with anti-religious trumpets blaring triumphantly.

There are many dangers inherent in this situation, not the least of which is the likelihood of escalated conflict over Shabbat – as a minority, militantly secular public slides further away from traditional Judaism, and the religious-haredi public grows significantly in size and assertiveness.

There is also the peril that “traditional” Israelis – who are both deeply connected to Jewish tradition while not rigorously observing Orthodox practice, and by all indications this is majority public in Israel at the moment – will be forced to work on Shabbat under the weight of market forces.

This already is happening. Whether this is department store clerks that must do shift work on Shabbat or lose their jobs, or engineers who are pressed into building bridges on Shabbat, or truck drivers told to transport turbines on highways on Shabbat – there is de facto anti-Shabbat-observance coercion involved here. This is sad and unacceptable.

GIVEN THE FACT THAT passage of Shabbat preservation legislation in Knesset is unlikely and at this point probably inadvisable too; and the fact that the radical tenor of public debate today on almost every issue of identity does not lend itself to accommodation; and the unfortunate fact that radical secular and radical religious parties hold the balance of political power in Knesset – what can be done?

Listen to the voice of Rabbi Yaakov Medan. Realizing that the Gavison-Medan Covenant he co-crafted has been overtaken by events and crushed by secular and religious crusaders alike, Rabbi Medan is now calling for consumer action to drive home the importance of Shabbat and restore some balance to society.

Specifically, Rabbi Medan is calling on Shabbat loyalists to shop (on weekdays, obviously) only in stores that are closed on Shabbat. Shop for Shabbat in stores that respect Shabbat, he says – to create momentum for a re-affirmation of Shabbat as a national, cultural value. Call this a form of affirmative action, designed to provide consumer rewards to store owners who voluntarily remain closed on Shabbat.

Personally, I already do this to a degree, but now I am going to be more conscientious about it. When I see a gas station advertising that it is closed on Shabbat, I will prefer to tank-up there and not at the open-on-Shabbat gas station across the street. The same goes for clothes, grocery and electronics shopping too. This is no different than my absolute and inviolable preference for restaurants that are kosher and thus are closed on Shabbat.

This is not a consumer boycott of stores that open on Shabbat, but a pro-Shabbat ‘buycott’ for stores that respect Jewish tradition. It is an activist effort to impact on our economy and society through personal choice. It is a declaration of purpose and belief in the religious value of Shabbat observance.

HERE IS THE PLACE to recall the societal and spiritual value of Shabbat.

Only Shabbat protects us from the crushing weight and the noisy mental distractions of the modern world. Only Shabbat’s manifold limitations on the self-exploiting machines of industrialized Western civilization allows for the emergence of an intellectual, spiritual and family space that is reflective and uplifting.

This is not to say that Shabbat observance in our day and time is primarily utilitarian. Despite what many people think, Shabbat is not mainly about “resting” or “recharging” one’s batteries so that we can return “refreshed” to work on Sunday or Monday. Shabbat is not just a certain type of down time.

Rather, the Jewish conception of Shabbat is an attempt to teach man the proper balance between creative action (work) and contemplative restraint (passivity); between an obsessive drive to achieve and worthy ego-nullification.

Shabbat is also about dveikut or cleaving to G-d; and by extension also to family and to peoplehood. By imitating G-d’s creation of the world over six days and then His “resting” on the seventh day, man can “adhere” or cling to a Divine message.

That message – the centrality of creative drive circumscribed by moral and spiritual restraints – is what has unified us a Jewish civilization and a people; and hopefully will continue to do so in the future.