By changing the discourse about settlements, the Trump administration is laying the groundwork for realistic negotiation. Even if you think that Israeli settlement should be rolled-back in the context of a sensible peace arrangement, applying the demonizing epithet “illegal” makes for a destructive narrative that distances, not advances, peace. 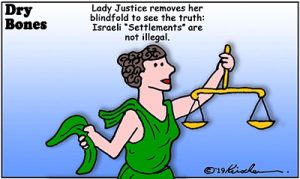 Critics of the Trump administration’s determination that settlements “are not per se illegal” assert that the decision pollutes the possibility of peace. Like President Trump’s move of the US embassy to Jerusalem, they allege that it is motivated only by crass political considerations.

These critics are wildly off base. What they don’t understand is that Trump administration moves consistently have been designed to reset the Mideast diplomatic table in a way that will advance a realistic peace process; a process that is based on historical truths, concrete realities, pragmatic solutions and responsible behavior.

First and foremost, this means dialing-down unreasonable Palestinian expectations and rolling-back Palestinian maximalism. Palestinian leadership must be disabused of the notion that it can coerce Israel into rapid, wide-ranging and risky withdrawals by appealing to international courts and tribunals to criminalize Israel. The canard that settlements are illegal, or a war crime, has been a key part of this insufferable Palestinian offensive.

As US Secretary of State Mike Pompeo wisely said this week, “calling settlements illegal hasn’t advanced peace.” Just the opposite. When the world terms Jewish settlements in Judea (Judea!) and Samaria as illegal and considers the territories to be stolen property that must be returned to Palestinians, the Palestinians have no reason to genuinely negotiate with Israel.

Even if you think that Israeli settlement should be rolled-back in the context of a sensible peace arrangement, applying the demonizing epithet “illegal” makes for a destructive narrative that distances, not advances, peace. It is deleterious discourse.

What Washington has done – this week and in its previous decisions about Jerusalem, UNRWA, aid to the Palestinian Authority, the Golan and more – is put the Palestinians on notice that the US will not deliver Israeli concessions on a silver platter, and that the longer Palestinians are obstructionist the less statehood they will get.

Washington is also asserting that real peacemaking begins with truth-telling. As Netanyahu said this week, “Jews are not foreign colonialists in Judea and Samaria.” Or as Blue & White leader Moshe “Bogie” Yaalon said, “One cannot be an ‘occupant’ in his own land.” Now, let the negotiation begin from here.

IMPLICIT IN THE TRUMP administration’s refreshingly realistic approach is the understanding that Israeli-Palestinian negotiations should not begin from any 70 year old armistice line forced upon Israel by Arab aggression; nor “from the point that talks last left off” 11 years ago under a previous, defeatist Israeli government; nor from the defensive “security fence” forced upon Israel by Palestinian terrorism; nor from any borders highhandedly dictated in advance by jaundiced foreign countries or politicized international legal tribunals.

Similarly, Israel’s baseline position at the outset of any future talks should be that 100 percent of Judea and Samaria (the West Bank) belongs to Israel by historical right, and that this right is richly buttressed by political experience, legitimate settlement, and security necessity. Only then can Israel hope to obtain a sensible compromise.

Keep in mind that there is a broad consensus in Israel on security and settlement matters; accentuated in the way that Blue & White leaders this week responded positively to the US announcement on settlement legality and to previous US declarations regarding Jerusalem and the Golan. Even if, inshallah, the Palestinians one day choose to settle with Israel, Israel will insist on maintaining control of the Jordan Valley and most highland settlement zones, not to mention a very broad Jerusalem envelope.

And thus, kudos are due to the Trump administration for essentially rejecting obsolete paradigms and hackneyed diplomatic assertions such as “everybody knows what the contours of a Mideast peace settlement look like and they run along the pre-1967 lines,” or “Israel must allow a full-fledged Palestinian state on contiguous territory in full control of all its borders.”

Today, these are no more than ruinous, synthetic gospels.

The reason for this is that the Clinton-Obama parameters for an Israeli-Palestinian deal were never wise nor fair to Israel. They didn’t sufficiently take into account Israel’s historic and national rights in Judea and Samaria. They certainly didn’t consider, and today cannot adequately accommodate, the dramatically changed security environment in the Mideast since the Arab upheavals began and Iran began its march to Israel’s borders.

Worst of all, those parameters insufficiently considered the irredentist nature of the Palestinian national movement. We now know, alas, that the Arafat- and Abbas-led Palestinian Authority isn’t anywhere near becoming the stable, moderate, democratic State of Palestine that was promised to Palestinians and Israelis alike.

Instead, one part of the Palestinian-claimed area is run by an exceedingly-corrupt secular dictatorship that “pays for slay” (it funds terrorism against Israel) and seeks the criminalization of Israel in every international forum, and which would fall to Hamas without Israel’s military presence; while the other part is occupied by a radical Islamist dictatorship that is armed to the teeth by Iran, has fought three wars against Israel over the past ten years, and is openly committed to Israel’s destruction.

Remember this too: The only Palestinian government/s in Judea, Samaria and Gaza that Israelis can live with over the long term must agree to a permanent end to the conflict and all claims on Israel – meaning no “right” of return, the inculcation of peace (and not genocidal anti-Semitism) in schools and media, and reconciliation with Israel as the nation state of the Jewish People.

But almost all Palestinians reject these contours. They view such as a “sovereign cage.” They do not crave a “statelet” (even on the 1967 lines) and apparently, they feel no urgency about achieving it.

As the prominent Palestinian advisor Prof. Ahmad Khalidi has admitted: “The concept of Palestinian statehood is nothing but a punitive construct devised by our worst enemies – the US and Israel – to constrain Palestinian aspirations and territorial ambitions.”

Or as Palestinian Authority leader Mahmoud Abbas has repeatedly made clear, the Palestinian liberation movement will never recognize Israel as a Jewish state or agree to forgo the so-called “right” of refugee return. In short, he wants his state, but without an end to the conflict. He wants a state in order to continue the conflict against the “illegal” Jewish settler presence in all “Palestine.”

Stripping Abbas of any legitimacy for such war-like discourse about Israeli “illegality” is a key goal, and hopefully will be a solid outcome, of the Trump administration’s announcement this week.